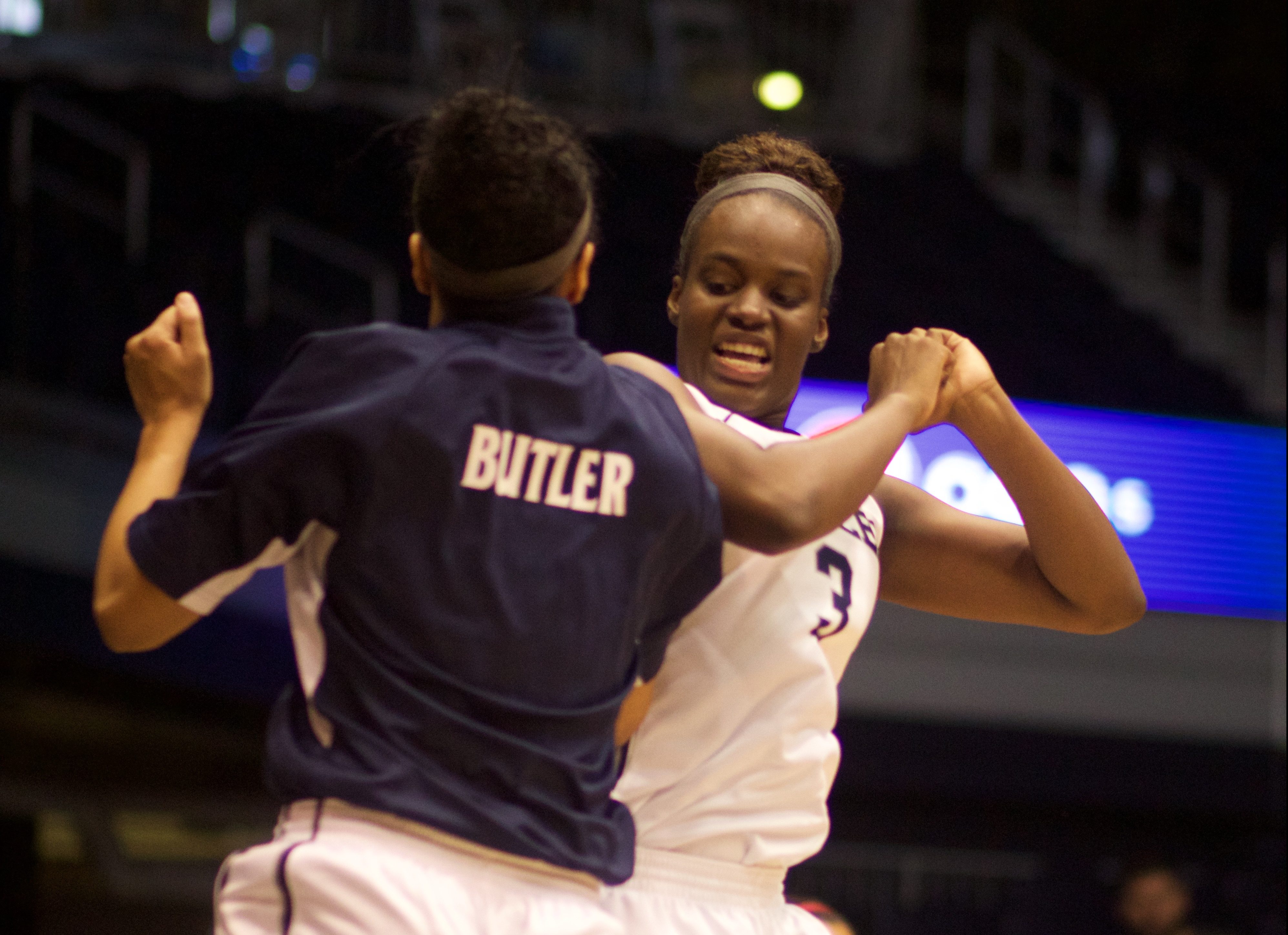 Brittany Ward gets ready to play after being announced to the crowd. Photo via Collegian Archives.

Brittany Ward sees basketball in her past, present and future.

However, the Butler University women’s basketball team forward finds herself in a situation unlike one she has ever seen before.

Ward is sidelined for the duration of the basketball season after starting every game for the Bulldogs last season as a freshman.

She tore her right plantar fascia over the summer and was put in a cast. The plantar fascia is the ligament that connects the heel to the bone. Once out of the cast, she made progress until the exhibition game against Southern Indiana University.

Ward came down hard on her right plantar fascia and aggravated the injury, which resulted in a lot of swelling. Since the injury, Ward has not played in any games, something she had never done in her high school or college careers. She has found herself on the sidelines since the injury occurred.

“I’m always the loudest on the bench, but when adversity sets in and I can’t really do anything, I feel kind of sad and I feel kind of bad,” Ward said. “I try to talk to the younger girls and tell them, ‘Hey you’ve got to do this, or hey, don’t rush, take your time.’ I try to be a vocal leader and just talk to them and help them get through it.”

While at Pike High School in Indianapolis, she set the school record for rebounds, was a three- time All-State selection, four-time team MVP and the 34th ranked recruit in the nation, according to the Butler Athletics website.

Jason Hohlt was the assistant coach at Pike High School during Ward’s junior and senior seasons and saw her potential back then.

“She’s a born leader — she leads by example,” Hohlt said. “She was a very good vocal leader. She’s a winner she wanted to win and she wanted to win at all costs. She was never worried about personal accolades. I know she’s only a sophomore, but I’m sure she’s like she was when she was a senior here at Pike — I’m sure in a way she’s still a leader even as an underclassman.”

In the long run, Ward based her decision off her familiarity with the Butler coaching staff.

“I knew the coaching staff at Butler pretty well,” she said. “I started off really wanting to go far away if you can’t tell. I had schools that were six to eight hours away – and then there was Illinois and Butler. So, I don’t think distance really had anything to do with it. But I’m happy that I am close now that I’ve gotten into it.”

“As a player, just to watch her develop along with the rest of my teammates, she’s just grown to be a better leader and just a better player overall and grown as a person,” Alexa Bailey said. “From being shy and everything because she was new to the team to being more open and more vocal.”

Ward has her entire family in the area and sees them in the stands of Hinkle Fieldhouse at every game.

“It makes me feel good knowing that I have somebody in my corner in the background helping me help my team and support us,” Ward said. “Just knowing that every game I’m going to have somebody there – whether it be my mom criticizing me telling me what I should’ve done, or my grammy comforting me, rubbing my back, telling me it’s going to be okay.”

After graduating from Butler, Ward hopes to go professional and has looked to high school friend and current New York Liberty guard Shavonte Zellous for advice.

“She’s been talking to me and walking me through what to do to make it to the next level,” Ward said.

The sports media major also sees herself working at ESPN as a long-term goal for her and looks up to analyst and reporter LaChina Robinson.

“I really like the way she carries herself and her brand and she’s an independent interviewer, so everything she does, she has to work hard and get her name out there,” Ward said. “She knows her stuff.”

Ward is delighted to move forward as she hopes to return tonight when the team faces the University of Arkansas on the road.

“I should be back playing Wednesday against Arkansas, so I’m really excited about that,” she said.

The Bulldogs are set to play Arkansas in Fayetteville at 8 p.m. The game can be seen live on SEC Network Plus.