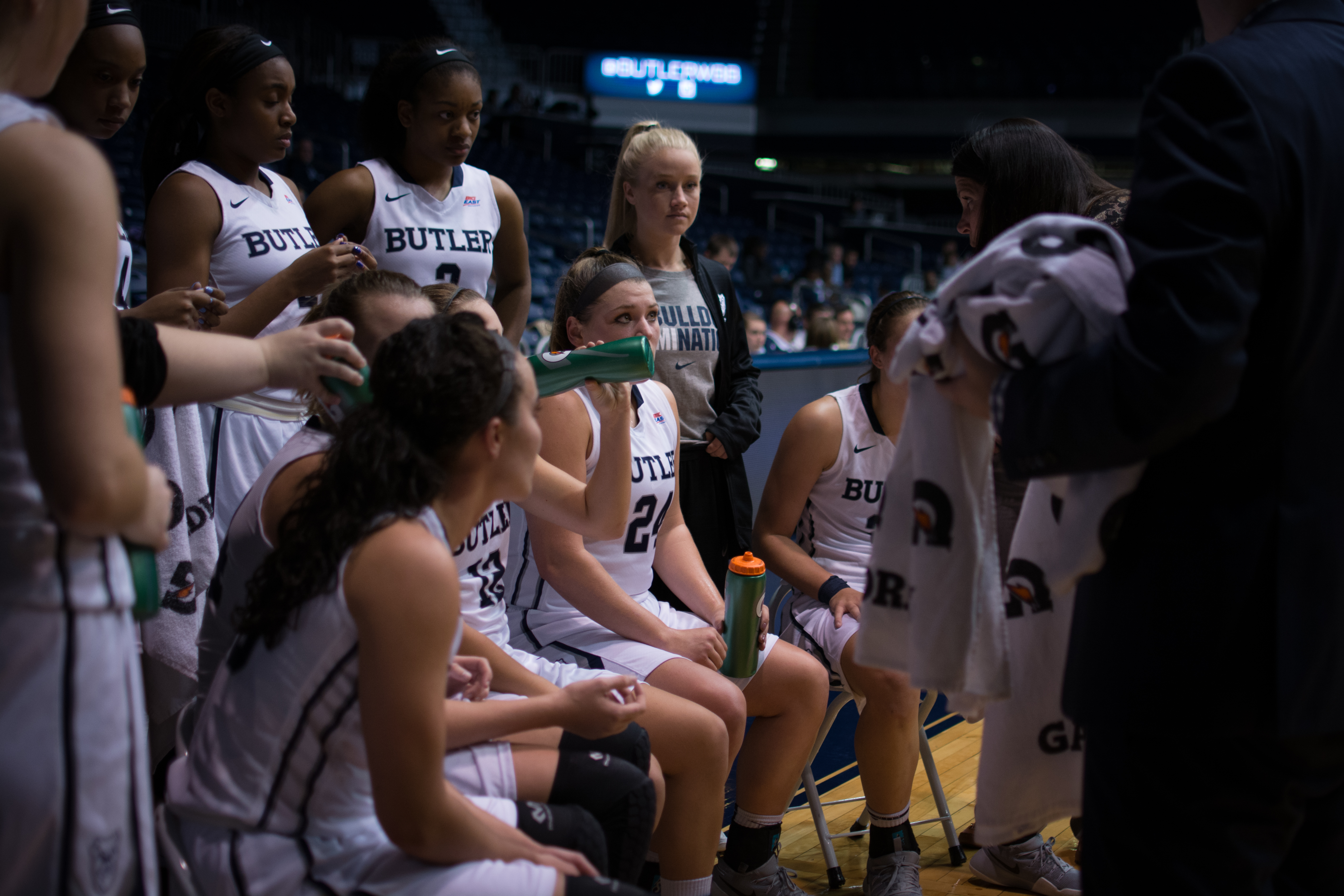 The Butler women’s basketball team debriefs during a timeout. Photo by Adam Cvik.

After a strong first half, the Butler University women’s basketball team (2-5) narrowly missed defeating the University of South Florida, ultimately falling 74-59, on Dec. 2.

USF is undefeated this season (5-0) and is receiving votes in AP and coaches polls.

“We knew this was going to be a tough game going in,” Butler forward Tori Schickel said.

“We needed a win. We needed to come out with heart and an intensity we haven’t had for a while.”

The Bulldogs opened the first five minutes of the game with an impressive start, shooting 50 percent from the field to lead 10-3. Kristen Spolyar’s quick three points from the top of the arc and breakaway layup set the tempo for Butler in the first few minutes.

USF struggled offensively, shooting just 1-9 from the field. The Bulls rallied back in the first quarter with a series of 3-pointers to pull ahead 16-14 at the end of the quarter..

Schickel forced a key USF turnover in the middle of the second quarter, allowing Buford to convert the two points and put the Bulldogs on top. Schickel would come back for a layup in the last seconds of the first half to giver her team a one point edge. Butler finished the first half with a 31-30 lead.

At halftime the Dawgs lead USF 31-30. The Dawgs leading scorer is Spolyar with 7 points. #GoDawgs pic.twitter.com/U7x8OVqPSO

Things went south for the Bulldogs in the second half. The team fell behind in the third quarter after USF went on an 11-4 run in the first five minutes.

USF never looked back and used a series of free throws to secure their lead late in the fourth quarter and pull away for the win.

Butler was efficient from the field, shooting over 51 percent compared to the Bulls’ 32 percent. However, USF narrowed the scoring margin with efficient scoring from behind the 3-point arc.

“We tried to push them off the 3-point arc with ball pressure,” head coach Kurt Godlevske said.

“For the most part, I think we did a terrific job. But we let some of them get away, and paid for it.”

Godlevske said Schickel’s performance has been a key element for the team.

“She’s someone we have to throw the ball to,” Godlevske said. We depend on her to make the plays and she gets the extra possessions by crashing against the glass.”

The team will be back in action Dec. 4 against Ball State University at 1 p.m. in Hinkle.