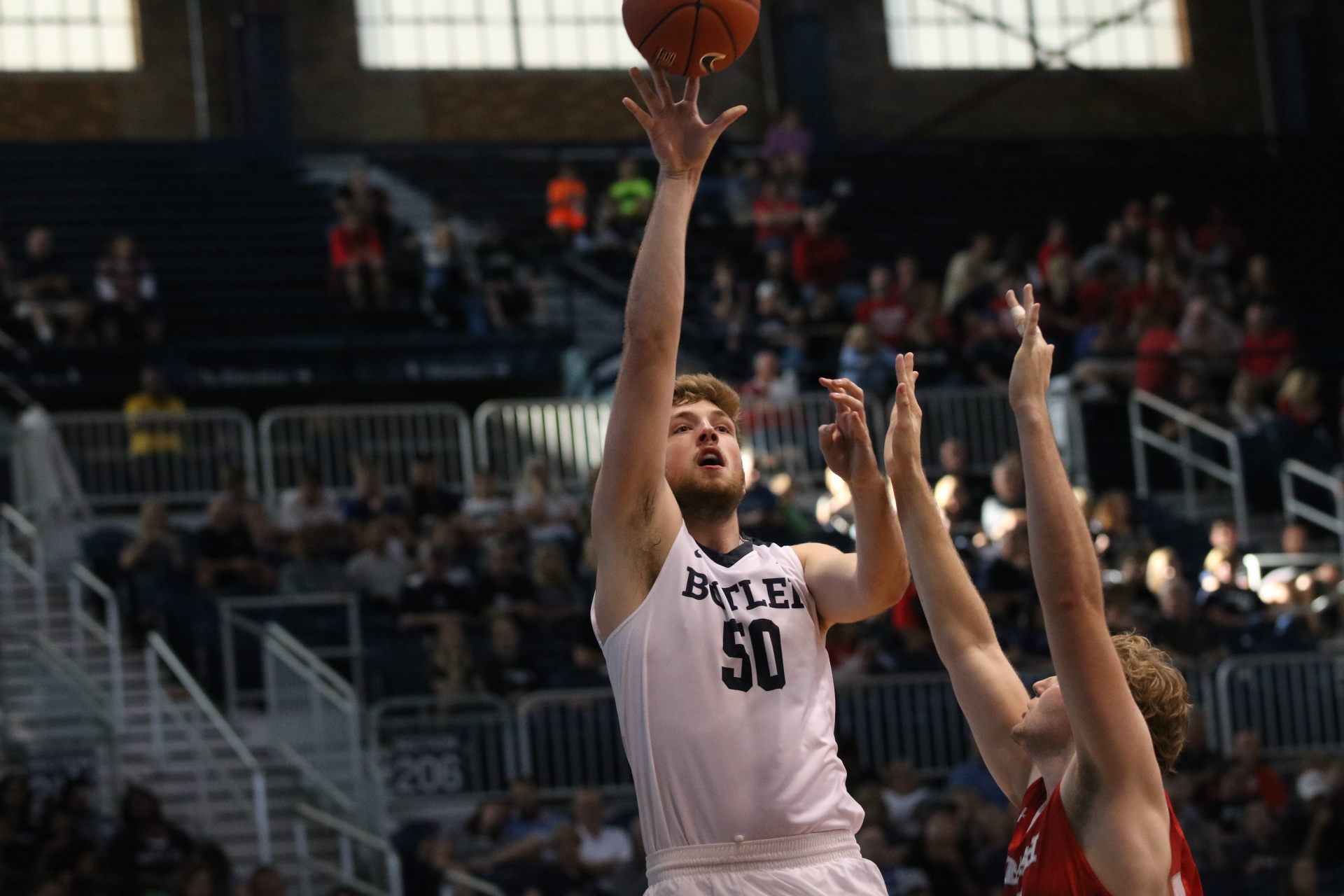 Joey Brunk reaches over a defender to grab a rebound. Photo by Jimmy Lafakis.

This is Joey Brunk’s standard greeting. He says those words to his friends, his teammates and everyone in between.

The 6’10’’ Butler men’s basketball center spreads his love amongst his extended family and beyond. Brunk said the word “brother” means a lot to him because his younger brother Johnny was a main reason he committed to Butler.

“I just wanted to stay close to him,” Brunk said. “We’ve always had a great relationship, but we’ve spent a lot of hours in the car and gym together over the past year or so.”

The Southport High School graduate finished his senior season averaging over 18 points and eight rebounds a game. He was an Indiana All-Star and has appeared in six games for the Bulldogs. He scored a career-high 10 points and pulled down four rebounds against Norfolk State University on Nov. 21.

Brunk said he enjoys the trials and tribulations of college.

“It has definitely been hectic,” he said. “Adjusting has been crazy, but it’s a lot of fun. I really am having a great time in a Butler uniform.”

He said he considers Butler guard and fellow freshman Kamar Baldwin a brother. Baldwin said they have developed a special relationship after playing together and living together in Fairview House.

“We tell each other stories and learn from one another,“ Baldwin said. “Living with him sure is fun. He always has something funny to tell me and stays positive all the time, but he snores sometimes.”

“Joey helps me with plays when I don’t understand something,” Baldwin said. “He explains why things happened and then dives deeper to help me understand what I missed. I appreciate him for all he has done for me.”

Graduate transfer guard Avery Woodson met and trained with Brunk over the summer. After traveling with him and getting to know him well, Woodson said Brunk will be a special Bulldog.

“He has a motor that constantly runs,” Woodson said. “He is very skilled and reminds me of a young Matt Howard.”

The two players clicked immediately. Brunk said he looks up to Woodson and appreciates the advice he gives and the stories he shares. Woodson said Brunk’s easy-going nature made it easy to bond with him.

“His sense of humor is my favorite part about him,” Woodson said. “The guy is a clown. We’ve really connected because we are down-to-earth, cool dudes.”

Brunk said he is close with all of his teammates but is perhaps closest with senior forward Andrew Chrabascz. They always stand next to each other during the National Anthem. Chrabascz said their similar positions helped to mold an instant bond.

“The big guys have to stick together,” Chrabascz said. “I know we will continue to get even closer as the season gets rolling.”

They work on drills together in practice and before games. Brunk affectionately refers to Chrabascz as “The Wizard” because the senior correctly answered a math problem in their Win, Lose or Draw class taught by Karen Holmes. Brunk then told Chrabascz he is a “wizard on and off the court.”

The nickname stuck. Chrabascz said he feels Brunk is the younger brother he never had.

“We have just kind of grown into this little-big brother relationship,” Chrabascz said. “He cares so much about this team and does whatever it takes to win.”

Brunk said he is surrounded by a community of great people. He said he feels incredibly comfortable at Butler.

“I truly am living the dream every day,” Brunk said. “I couldn’t imagine it getting any better.”