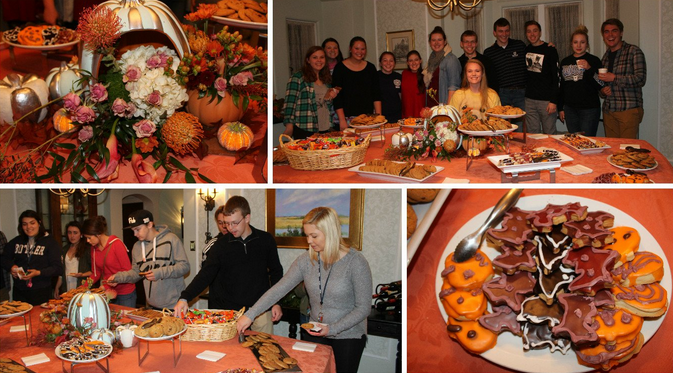 “We really enjoy welcoming students who have never been to the president’s residence before,” Bethanie said. “We feel that all students should come here during their time at Butler and feel at home.”

Dozens of students walked through the festively-decorated front door of the president’s house starting at 7 p.m. Monday night. Arrays of chocolate chip and oatmeal raisin cookies (the Dankos’ favorite kinds) and candy sat on tables in the living room and foyer.

“Danko and his wife are very hospitable and have such a welcoming home,” first-year student Lizzy Meidinger said.

Bethanie stood in the kitchen stirring a large, silver pot of apple cider as it warmed up on the stove. About halfway through the open house, the apple cider ran out. Thanks to the Dankos’ daughter, who sped to the nearest grocery store to buy more cider, Bethanie was able to heat up another batch for the students in no time.

The president described this year’s open house as “much bigger than we’ve ever had.” He credited the large turnout to social media, as several Butler organizations, including SGA, posted the event’s invitation for all students to see. The hyped event attracted students of all grades and ages to come for food and great company.

“Never have I seen so much tweeting and buzz about the event,” the president said.

Students mingled casually until about 9 p.m. with the president, his wife and their dog, Zooey, who was dressed in a witch costume. The presidential couple has plans to keep their Halloween Open House tradition continuous next year.

“One of the things that makes Butler so special is the access that our students have to their professors and administrators, including us,” Bethanie said.