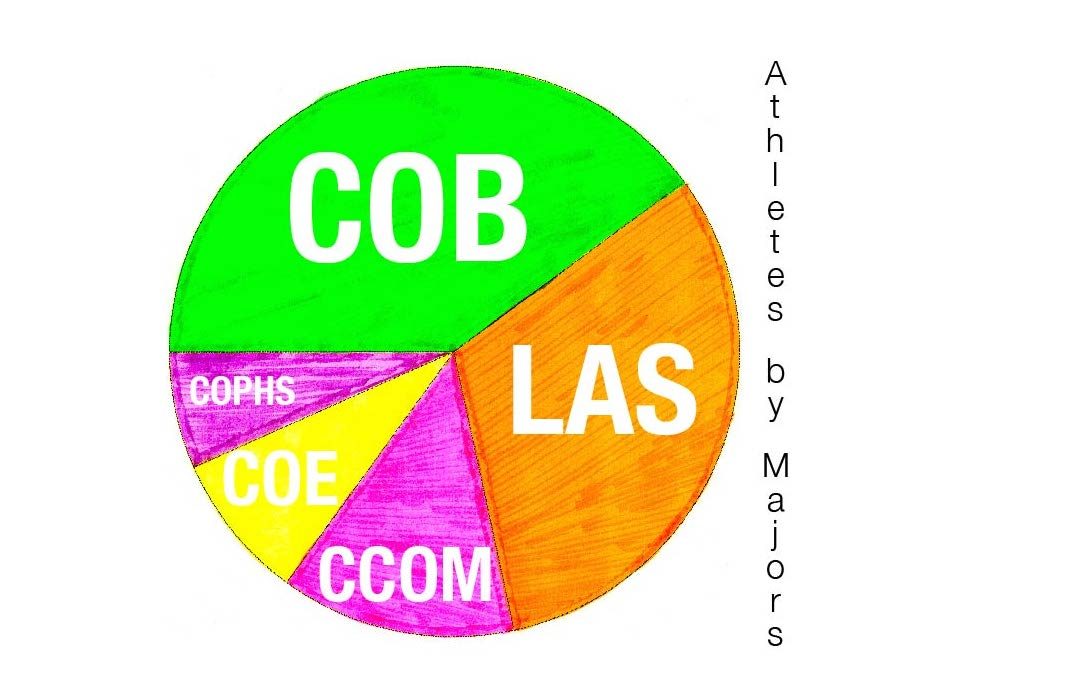 Nearly half of Butler University athletes prepare for careers in the business world after graduation.

Records obtained from the Butler University Registrar’s office show the Lacy School of Business is the most popular college within Butler athletics. Of Butler’s 394 athletes, 156 are in the business school.

Athletics declined to break down the numbers by team for fear of breaking student confidentiality rules.

People tend to associate with a stereotype that most athletes go to college only for sports and major in business to get through easily. No labs are required, and because it is a popular college, there are multiple of the same class offered, making it easy for athletes to work classes around their sports schedule.

“The term ‘easy’ on this campus doesn’t exist,” she said. “To say it would be easy is crazy. The amount of not just time, but preparation not only in business but [at Butler] overall sets us apart from other universities.

“Take those students in [Real Business Experience], with all the outside work; group work, creating, marketing and selling [a product], and then put them in a sport where they have practice, weight training, home games, away games and what have you. It’s not easy.”

Cord Collier is a senior finance major and a redshirt junior tight end on the Butler football team. He also shot down this notion. He did not deny many athletes are in the business school, but he said it is because being a businessman is a lot like being an athlete.

“As an athlete, you’re pushed to be strong and motivated, and that helps with business,” he said. “You are rewarded for being competitive. It lets you continue to have that fire and drive that keeps you going.

Hopkins said she agrees business and athletics can go hand-in-hand.

“I would say that there’s some truth to that,” she said. “Possessing those characteristics is important. They understand what being challenged is like.”

The second most popular college in Butler athletics is the College of Liberal Arts and Sciences, which has 124 majors, 31 percent of the athletic population.

Sophomore Spencer Lang is on the men’s tennis team and is a biology major. He said he is the only one on his team that not only majors in biology, but is in LAS.

“Most of my teammates are majoring within business,” he said. “I’m kind of alone on that one.”

Lang said he considered pursuing a business-related major, but decided to follow his goal of being a doctor one day instead.

“I know that if I were a business major I’d have a little more free time,” he said. “I was really hesitant.”

Butler’s College of Communication is the third most-majored college with 52 athletes making up 13 percent of the athletes.

Sophomore forward Brittany Ward, from the women’s basketball team, believes this college has the most post-sports potential because of the sports media major. Student-athletes will leave college with knowledge of the game. But now they can learn the behind the scenes aspect and practice for a job covering, announcing, analyzing or producing sports.

“I knew that after I was finished playing in college or professionally that I wanted to stay in sports,” she said. “I feel like me being an athlete and knowing people, they will know I have the experience. I feel like it does give myself an advantage.”

Being a CCOM major  can be difficult. Just as science majors have labs, they have extracurriculars for experience or for class. Ward feels she is at a disadvantage because she is an athlete.

“It’s kind of hard, because … I can’t participate in extracurricular media [to get experience] because I’m so busy,” she said.

The biggest difference between Butler overall and athletics is the amount of majors in the College of Pharmacy and Health Sciences.

The pre-pharmacy program has 14 athletes, giving it the lead in COPHS, while six athletes are pursuing a bachelor of science degree in health sciences.

Currently, there are no student-athletes majoring in the Jordan College of the Arts.

LAS has an advantage because it has 40 majors within the college. But athletes only partake in 19 of those majors, compared to nine in LSB and CCOM.  Four majors are represented in COE and six in COPHS. With the exception of COE, all other colleges’ programs are being pursued by athletes.

According to last year’s data from Butler’s Fact Book from the department of institutional research, the athletic numbers do not exactly match the numbers of the whole university. The largest college at Butler is LAS with 1,244 students or roughly 30 percent of the population.

The business school is just behind with 24 percent of students, while the pharmacy school has 21 percent, 874 students. CCOM places fourth with 434 students, 10 percent of the population.

Only two colleges, COE and JCA, have enrollment percentages in the single digits. COE has 284 students, six percent of the student population, and JCA is last with just 132 majors; three percent.

While business majors make up 40 percent of the athletic population, 60 percent major elsewhere.

The most popular major in LAS is biology with 27 majors. Biology also ranks as the third highest major overall in athletics. Chemistry is the next highest major in LAS with 15, and actuarial science, economics and psychology are tied for third with eight majors each.

Lang is also minoring in chemistry. Because of this, he has three labs a week. During the season when the team travels frequently, Lang said he tends to fall behind.

“That’s the toughest part of being an athlete; traveling,” he said. “Especially in science classes, there was a time last season when we were gone Wednesday through Friday. When we came back I was almost lost.”

In CCOM, strategic communication is the leader with 21 athletes majoring in the program. Communication sciences and disorders is second with 10, and sports media is third with seven.

COE has different limitations, such as student teaching which does not allow athletes to practice or travel. But COE ranks fourth in athletics. Twenty-nine athletes major in middle/secondary education. Elementary education has three majors and school counseling has one athlete major.

David Goldsmith, a senior forward on the men’s soccer team, is a middle/secondary education major with a focus on human movement and health science.

Goldsmith fits the other stereotype that athletes put more emphasis on sports than they do academics. He admitted his major was an afterthought when he decided to come to Butler.

“The main reason I came [to Butler] was because of soccer,” he said. “Then coach [Paul Snape] was like, ‘Hey, you need to pick a major.’”

Goldsmith said soccer is still his No. 1 priority, especially on game day.

“The day of a game, I try not to do homework,” he said. “I want to focus on the game. I’m also a big believer in sleep. I have to get nine hours or I’m not feeling right. I’ll push homework off for sleep.”

Goldsmith said the most difficult thing for him is a lack of class options.

“I have a small major, so I only have specific class times to choose from,” he said. “I miss Tuesday practices [because of class], so I do an individual practice with coach.”

One stereotypically difficult major at Butler is the doctor of pharmacy program, which Butler is known for. The six-year program has four athletes enrolled.

Although the number of majors are low, Hopkins said she does not see many students from this college because they are pushed enough by their professors.

Daria Szczepanek is a junior pharmacy major, as well as a defender on the women’s soccer team. She said she is always doing homework and studying.

The athletic department mandates study tables for all first-year students in order to help them learn time management and preparation skills, Hopkins said. If they have at least a 2.5 GPA after the first semester, they only have to go on an as needed basis.

“We want them to understand that it’s about time management and preparation, not cramming for a test, although I’m sure it happens from time-to-time,” she said. “We also want to make sure there’s communication between the athletes and their professors.”

Lang agreed the key to success is what Hopkins mentioned — time management.

“It’s about getting your work done when you can and analyzing ‘When can I go out,’” Lang said. It’s just knowing how much time you have and thinking about your future right now.”

Sometimes students have to tailor their schedules to fit with sports. Szczepanek said she consulted her advisers to make the best schedule she could.

“I set myself up really well and look at the soccer schedule to get the best fall schedule,” she said. “I took more classes in the spring that way I can have a lighter fall. A lot of time is taken away, but you just really got to plan it out.”

Although there is a wide variety of majors and disciplines, athletics treats all students the same. They require students to get a 2.5 GPA, but Hopkins said they surpassed the goal with the average GPA in Butler athletics is over 3.0.