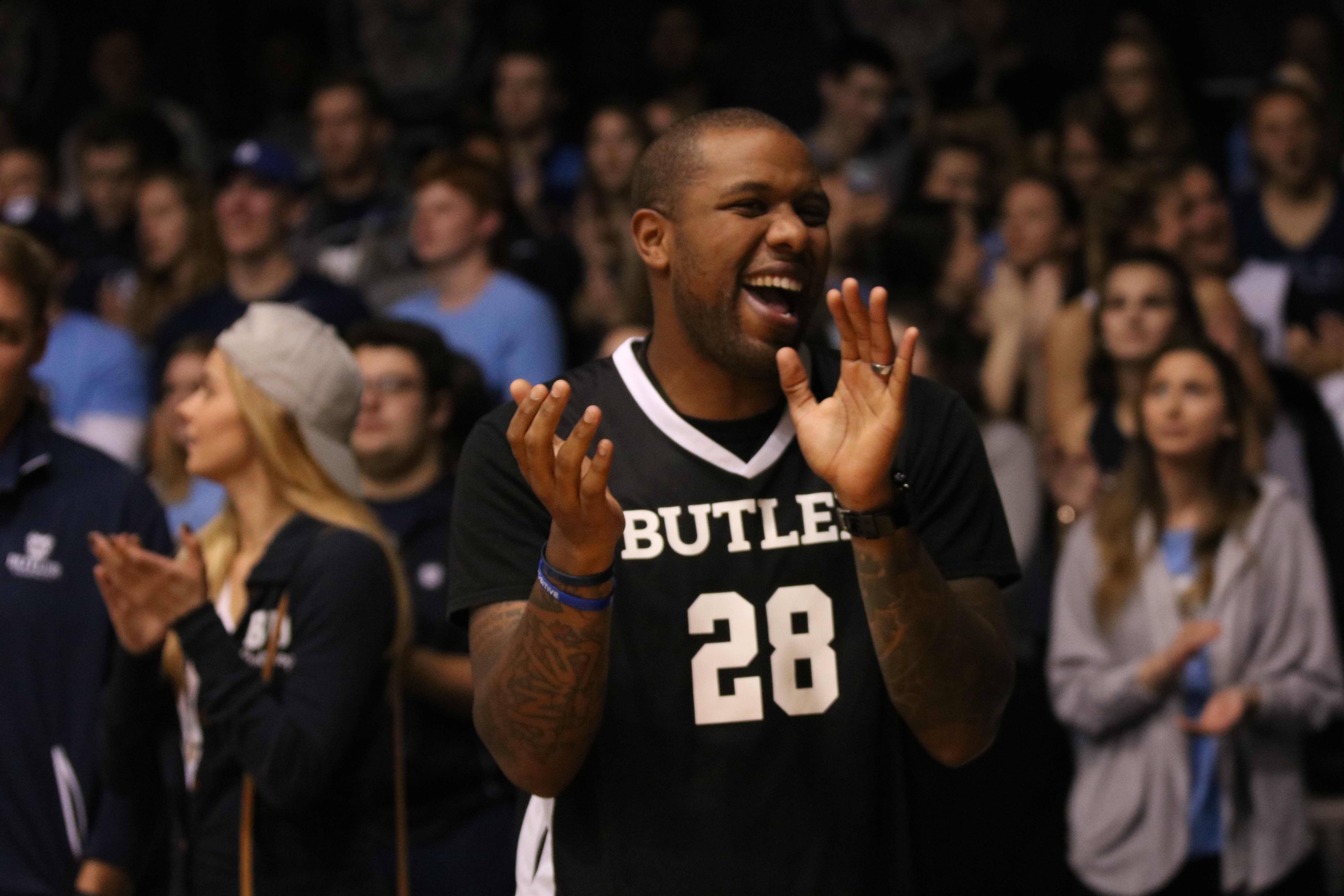 The buzzer sounds for the first media time out of the men’s basketball regular season. The Butler Bulldogs and the Northern Colorado Bears regroup in their huddles after the first four and a half minutes of their 2016-17 seasons.

Up on the big screen, a man with a microphone sits on the steps in section 116 with two very happy fans. These fans have just been moved down from their section 318 seats for Butler’s first game of the season.

But who is the man? Who is the guy with a No. 28 Butler jersey that says Mr. Kinetik on the back?

Marc (Mr. Kinetik) Williams has been the emcee for Butler basketball games creating energy inside Hinkle Fieldhouse since 2009.

He said his favorite part about his job is getting a reaction from the fans.

“If I say the right thing, almost 10,000 people will respond,” Williams said. “And that will boost the team.”

Williams gets those reactions from fans like first-year student Dave Moran.

“He’s legit,” Moran said. “His dedication to his work always keeps the crowd invested in what’s going on in Hinkle.”

Williams’s participation in the athletic program began as a cheerleader his senior year. He was there for Butler’s win against the Maryland Terrapins, landing the team in the 2007 Sweet Sixteen.

“I was down there cheering, and it was like, ‘Oh man we are about to go to the Sweet Sixteen,’” Williams said.

His love for Butler has not wavered since he graduated.

In 2008, he became interested in the emcee position for basketball games. He started with a women’s game in the spring of 2009 then was offered the job full time before the 2009-10 season.

“The guy before me was not a Butler guy,” Williams said. “I thought it should be a Butler guy, so I asked if it was something I could do.”

He graduated from Butler in 2007 with a degree in recording industry studies and was notorious for having CDs in his backpack from his college group Run ‘Em Out.

“We would go to parties, and people would play our tunes and we realized that this was pretty cool,” Williams said.

His love for music continued after he left Butler. He plays and records music as well as being a DJ and emcee at different events around Indianapolis. Williams was taught the art of DJing as a teenager when his uncle, also a DJ, let him play the music for parties in his basement.

Williams is currently an adjunct professor at Butler and teaches at Fishers High School full-time.

At Fishers, Williams is a special education teacher, teaching six periods a day including English, mathematics and organizational skills.

At Butler, he is in his first semester as the professor of the honors seminar “The World of Hip Hop.” The class discusses the four main components of hip hop: rap, DJing, breakdancing and graffiti, and how they have an influence on society.

Williams brings the same energy to the classroom that he brings to Hinkle Fieldhouse on game night.

“He’s great at getting responses from people,” Emma Edick, a senior at Butler who takes his class, said. “And he knows so much about the information that he loves to talk about it. He has a similar energy in class. He interacts with the crowd the same way he does with all of us.”

After graduating from Butler in 2007, Williams continues to be part of the Butler college experience through teaching and bringing life and energy to Hinkle Fieldhouse during basketball season.

“He’s a good example of Butler in a sense that he is involved in so many different avenues of the school,” Edick said. “And he wants to be a part of our college experience.”

Williams will be back inside Hinkle Fieldhouse tonight at 7 p.m. when the Butler Bulldogs take on the Northwestern Wildcats.