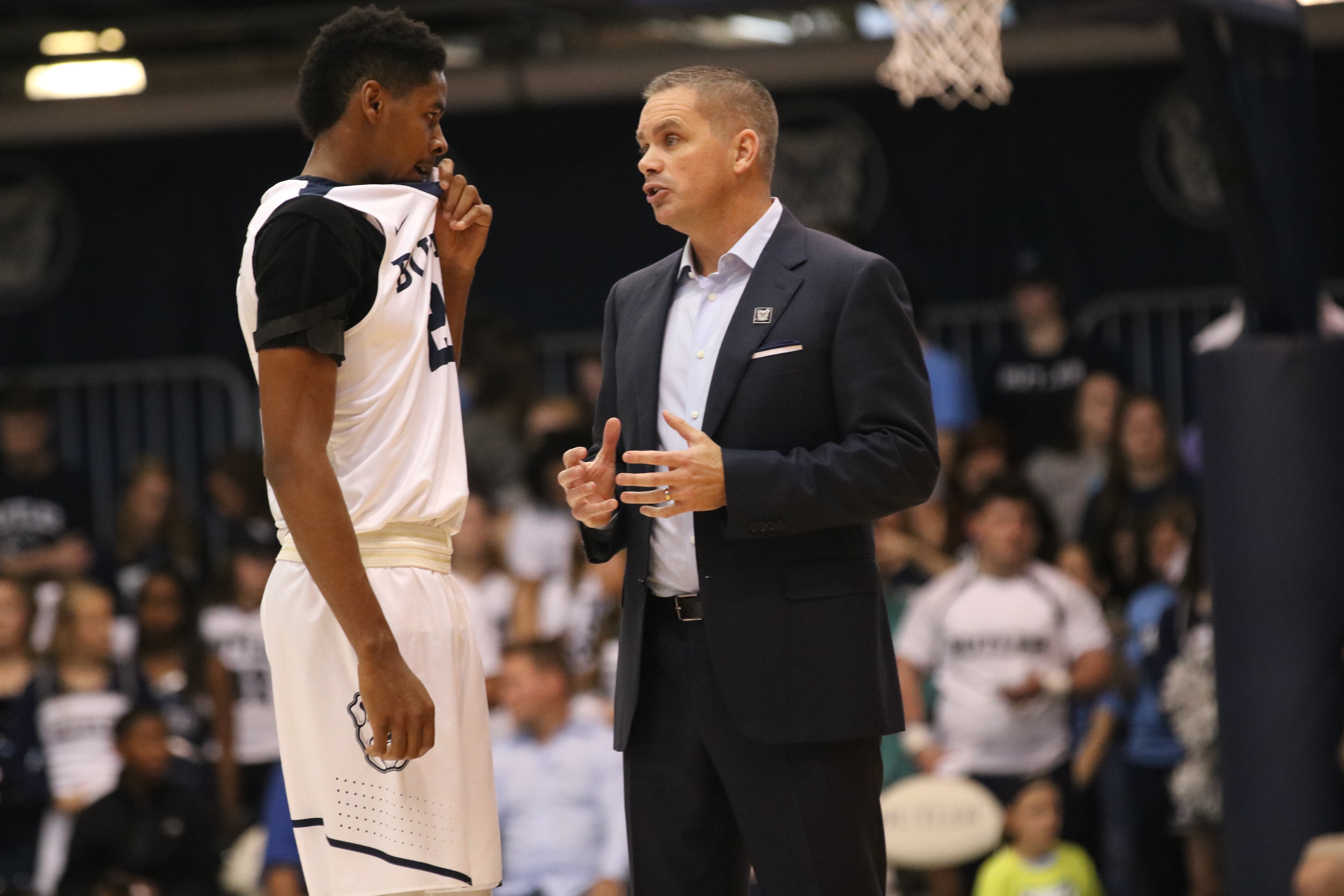 From left: Freshman forward Henry Baddley and head coach Chris Holtmann talk during the Oct. 29 exhibition game. The Bulldogs were ranked sixth in the Big East in a preseason coaches poll. Photo by Jimmy Lafakis.

Preseason basketball rankings have me singing, ‘first’s the worse, second’s the best, last’s the one with the treasure chest.’

I hum along in my head, a light singsongy tune, a vocal cadence of playground days. I see a glimmer of ingenuity in the childhood rhyme. What a wonderful way to approach life.

Leave it to a children’s playground song to overthrow first place and unanimously decide that second best was suddenly good enough to be the best for a change.

National rankings, conference rankings, player rankings, coaches’ rankings. Recruiting rankings, defensive and offensive rankings. No matter the ranking, there is a No. 1 and a No. 2. Followed by a three, four, five, and six.

Nothing is beyond the reach of formulas designed to spit out numbers, and fans crunch the numbers away until gameday.

The difference between first and second is a single digit, conglomerated by a single stroke, a free throw, angles and degrees, of minutes and seconds, of minute momentum shifts in the final quarter.

These factors cannot be defined by a single number.

A Big East coaches’ poll placed the Bulldogs sixth in conference. The school was ranked No.  41 by a CBS sports writer. Butler rounded out the Associated Press ranking with a handful of votes.

Sports Illustrated opened the month of November with a ranking for every team in Division 1 basketball, starting with Duke University and ending with Texas A&M, ranked No. 351. Here, Butler comes out at No. 29.

Sports Illustrated bases their numbers on 10,000 simulations. Projected offensive and defensive ratings are a culmination of statistics ranging from playing time, rebounds, points scored, development curves of similar players, to the style of play teammates use, to how well players  work with coaches.

I struggle to care about any of it. I’ve never had an affinity for numbers, lost in the infinity of equating digits to the outside world. There’s an X-factor the best statisticians can’t account for.

We stopped letting ourselves be surprised when a No. 30 team pulls a win over the No. 1 ranked team in the nation. Consumed by the numbers that attempt to explain how the underdog managed a win, we become convinced the game was a glitch in the system, failing to give credit to a team that refused to buy into the same numbers.

Leave the Cinderella stories alone, they’re rare traces of the impossible in a world filled with far too many evil stepmothers and sisters.

The freshman who flies under the radar until suddenly he’s flying over defenders. The redshirt transfer coming off the bench. A coach who does more to push his players beyond what numbers predicted. A pair of lucky socks worn by the forward before a triple-double. A new pregame routine.

Human nature wants to quantify what we do not understand. Our reliance on rankings attempts to understand the very nature of sports, something that cannot always be explained.

Let’s be honest, if Sports Illustrated ranked Butler basketball No. 1 this year, I wouldn’t be trying to discredit national rankings. But they’re not, which means I’ll be waiting for the Cinderella story.