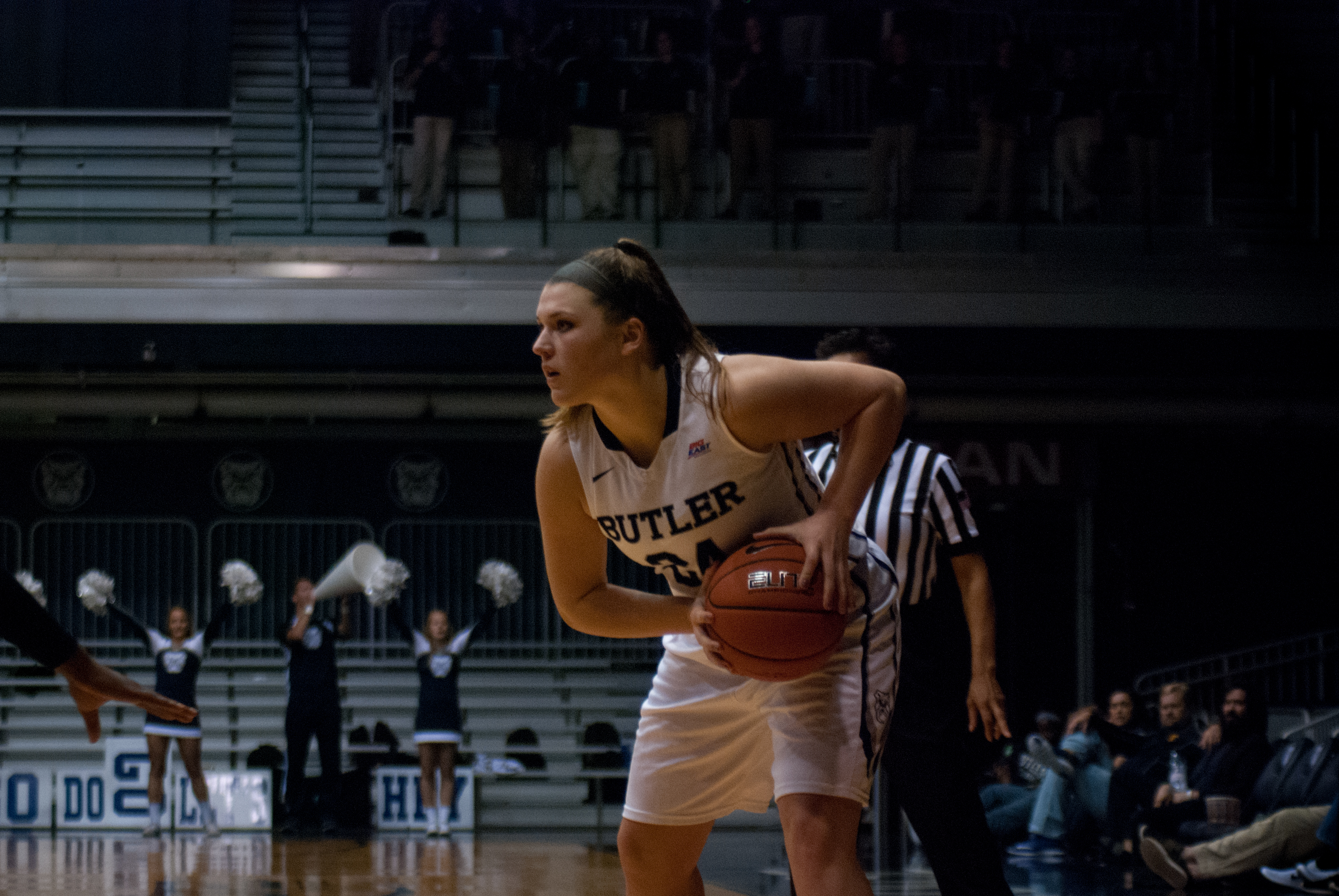 The Butler women’s basketball team closed out their first win of the season 58-56 in the last 0.3 seconds with an inside shot from forward Tori Schickel to break a tie over Bradley University.

The Bulldogs held a 48-36 lead until a 12-0 run from the Braves to start the fourth quarter erased the deficit to bring Bradley on top.

The Bulldogs rallied to tie the score at 56 with 25 seconds remaining. Head coach Kurt Godlevske called a timeout for Butler.

His team re-entered the court with a series of passes around the perimeter before a pass from guard Michelle Weaver found its way to Tori Schickel, who turned around to put up two points and win the game.

Schickel said the final few seconds came down to execution.

“We knew we had to pound the inside, we had great success on the inside all game,” Schickel said. “We were determined to get the shot.”

The sophomore forward ended the afternoon with 21 points, 11 rebounds, and five assists in 36 minutes of play. Schickel’s first rest did not come until the last seven minutes of the game.

“It takes a big toll on you, and it’s a big battle, but this will be good for us,” Buck said.

The loss of forward Brittany Ward, and guards Alexa Bailey and Sydney Shelton due to injury limited the Butler roster to eight players.

Godlevske sent Buck, Schickel, Shae Brey, Kristen Spolyar and Sarah Humphrey on the court for the first half. The five starters combined for a total of 179 minutes played. Spolyar and Humphrey put up 11 points each.

“We were down a few players, and we came into the game knowing that,” Schickel said. “This is what we worked for over the summer. All of the conditioning and training, it was for games like this.”

The Bulldogs got off to a strong start and showed no signs of fatigue, scoring 18 points to the Braves’ two points in the first quarter. The Butler women held Bradley scoreless for the last seven minutes of play. Offensively, Butler shot 54 percent from the field, with four out of the five starters scoring.

The starting five would play the first quarter without any substitutions. Only six Butler players saw action in the first three quarters with Weaver coming off the bench.

After going scoreless in the first four minutes of the second quarter, Butler rebounded with a quick three point play from Schickel. Bradley narrowed their deficit to seven points before Butler pulled away once more.

The first half concluded with a last second 3-pointer from Buck to seal her team’s 31-20 lead.

Sydney Buck hit a shot at the buzzer to enter halftime with eight points, one rebound and one assist in 20 minutes of action

The third quarter opened with a 3-pointer from Brey and mid-range shot from Spolyar to set the tone for a strong 48-36 Butler quarter.

Butler heads into the fourth quarter with a 48-36 lead over Bradley. Tori Schickel has a double-double with 15 points and 10 rebounds

Humphrey, Schickel, and Spolyar all played in the fourth quarter with four fouls each. Humphrey would foul out with less than three minutes left to play, bringing in Kaela Hodges. Outside of Weaver, Hodges was the only other substitute used.

Next, the Bulldogs will face Indiana University-Purdue University Fort Wayne at Hinkle Fieldhouse on Nov. 16 at 11 a.m.