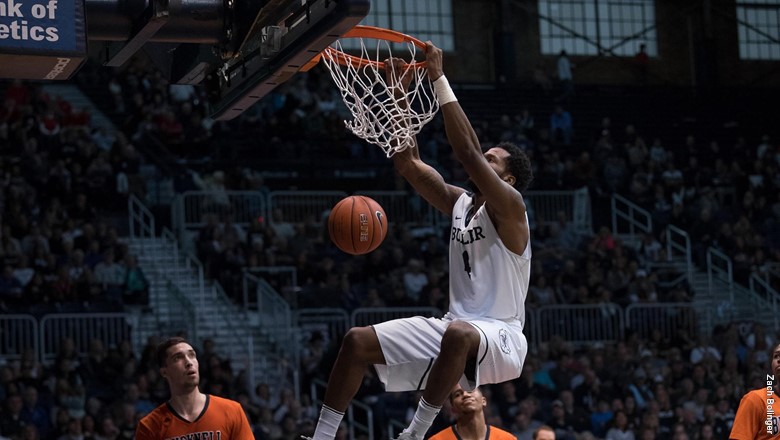 Tyler Wideman dunks the ball against Bucknell. Photo via Butlersports.com.

The Butler University men’s basketball team defeated Bucknell University 86-60 in the first round of the Continental Tire Las Vegas Invitational at Hinkle Fieldhouse on Nov. 19.

“There are a lot of good things that we can take from today,” head coach Chris Holtmann said. “I loved how we moved the ball and shared the ball. You have to do that, especially against a team like Bucknell and how they defend.”

After failing to shoot over 50 percent against Northwestern University, Butler rebounded Saturday. The team shot 62 percent from the field and 53 percent from behind the arc.

Avery Woodson and Tyler Wideman led the way for the Bulldogs with 14 points each. Kelan Martin followed closely with 13 points of his own.

Kamar Baldwin was the other player to find himself in double digit points with 10. He also tallied up two assists, one block and one assist.

Butler held Bucknell to 45 percent shooting from the field and 36 percent from behind the arc. Bucknell also committed 19 turnovers, something that Northwestern struggled with against Butler as well.

Holtmann said looking forward, he found some defensive issues he wants to fix. Holtmann did not allude to anything specifically, but the Bulldogs did have eight turnovers in the game.

“We had some lapses defensively at times today and that’s one of the things we need to clean up with a quick turnaround and another game Monday night,” he said.

Butler will be in action again at home Nov. 21 against Norfolk State University. Tip off for the second game of the Continental Tire Las Vegas Invitational is set for 8:30 p.m.