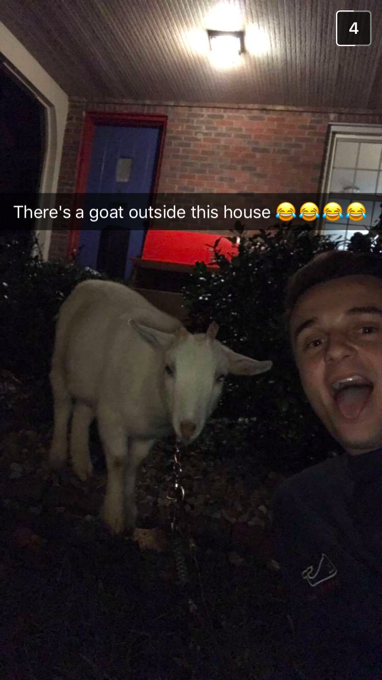 Many Butler students and community members are still celebrating the Cubs’ World Series victory — some with shirts, some with a goat.

The Bulldogs from Cubs’ territory are excited to break the 108-year curse. Across campus, students display their jerseys, hats and all other varieties of Chicago gear with pride.

The end of the ‘curse of the billy goat’ has been a common theme for Cubs fans across the midwest. The legendary curse is said to be what kept the team from winning the championship since 1908, but with their new World Series win, the curse has been broken.

On Nov. 5th, a borrowed goat appeared tied to a porch at a house behind Ross Hall to celebrate the Cubs’ World Series win and the end of the legendary “curse of the billygoat.”

As the legend goes, William ‘Billy Goat’ Sianis attempted to get into Game 4 of the 1945 World Series featuring the Chicago Cubs and the Detroit Tigers. He brought his beloved goat named Murphy—whom he had also purchased a ticket for. He was turned away at the gate, not because he had a goat, but because the goat smelled too strongly.

When he left, Sianis declared the Cubs would lose the 1945 World Series and never win another ever again. This statement was true, until the ‘loveable losers’ won it all in the game that started on Wednesday, Nov. 2 and, due to extra innings and a brief rain delay, bled into the next day.

Chicago area native, and Butler first-year, Michael Cutrone was in a friend’s room in Ross Hall when we saw the goat out of the window.

Cutrone went outside to investigate the goat across the street and, when he saw that it was real, he decided to take a selfie.

“I figured you don’t often have the opportunity to get up close to a goat, so I figured I should take a picture,” Cutrone said.

Banner came into the station to start his shift at 7:00 p.m. When he got to the office, someone at the station thought they heard a goat somewhere off in the distance.

“They were the only one who heard it, so we all just kind of laughed it off,” Banner said.

According to BUPD, they received a call about the goat later that night. The caller believed the goat was there to celebrate the Cubs World Series win over the Cleveland Indians, but was concerned the goat would be sacrificed or abused.

It turned out that the goat was there to celebrate the win, but not for as grim of an event as the caller was concerned about. The goat had been borrowed from a farmer, along with a cage, food and water to ensure the celebration was safe for the animal.

Officers Banner and Flinn went and talked to the students who had the goat on their lawn and took a picture with the goat, which was posted to the BUPD twitter account.

“They assured us that they would return it to the student’s parents the next morning,” Banner said. “I suggested that they keep the goat inside in its cage overnight so that no students untied it or tried anything.”