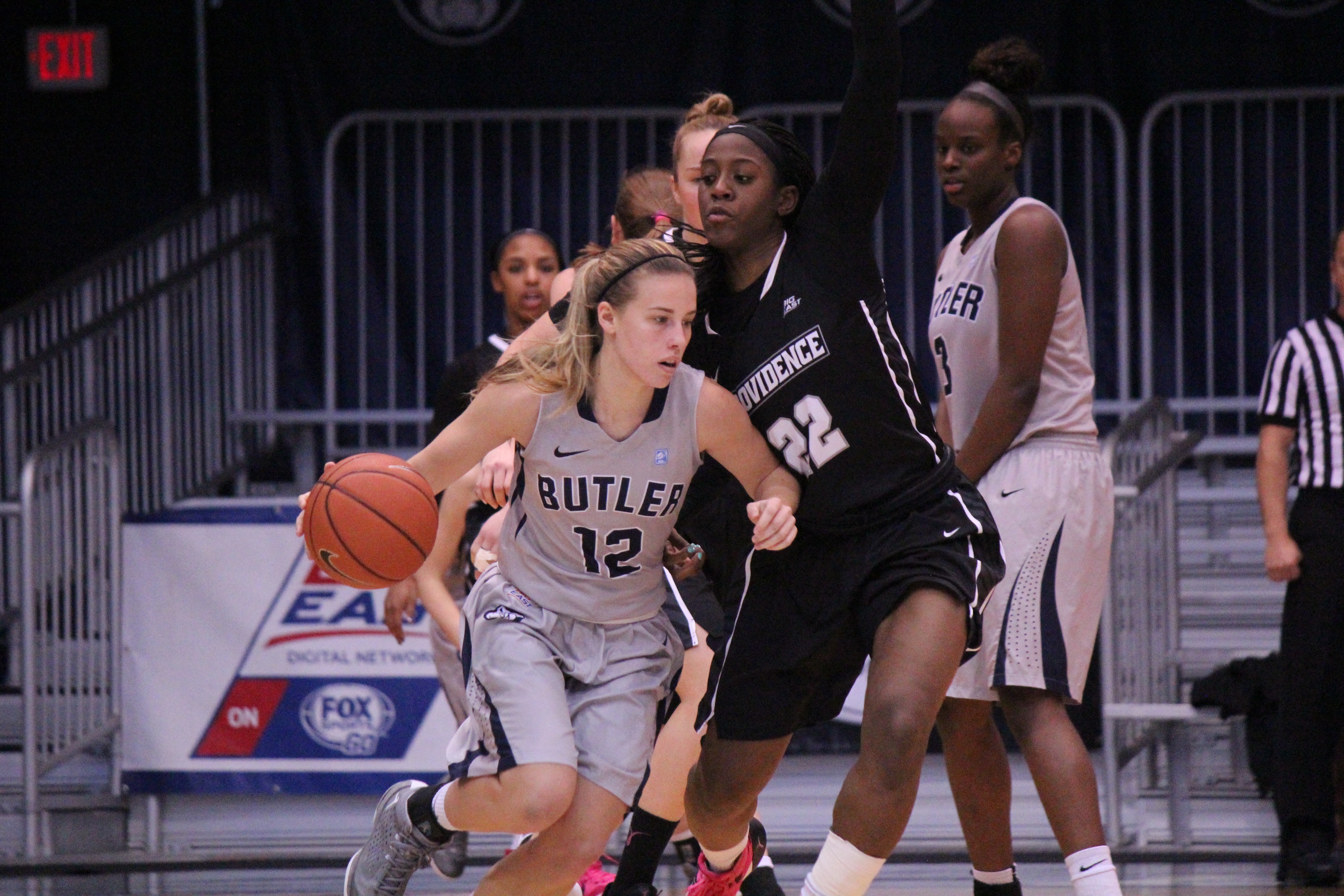 The Butler University women’s basketball team fell to University of Southern Indiana 61-56 in a tightly contested match for the team’s final exhibition game on Nov. 6.

“We played the way we practiced this week,” Godlevske said. “Very little emotion, very little energy. USI outworked us. A lot of times in games, that can dictate the score.”

Southern Indiana opened the game with a 3-pointer from guard Tanner Marcum 25 seconds in. The Screaming Eagles led 9-2 before Butler responded with a 10-0 run to come back 12-9. First-year guard Kristen Spolyar rounded out the first quarter action with a long range 3-pointer before the clock timed out.

Spolyar for 3! Beats the buzzer and gives BU a 12-9 lead at the end of the first quarter.

Spolyar led the team offensively and defensively with 12 points and seven rebounds.

“Each week in practice I’m getting more comfortable with all the plays,” Spolyar said. “I’m really working on my execution, so I have to know the guard and the forward spot which is difficult, but everything is coming along.”

The Bulldogs extended their lead 20-9 in the second quarter before falling to a strong offensive effort by Southern Indiana to tie the game at 26 points.

The Bulldogs gave up a total of 21 turnovers, with seven in the second quarter alone. Southern Indiana capitalized on their opponent’s errors, scoring 21 points from Butler turnovers.

Godlevske said the number was disappointing.

“It’s something that we talked about and worked on a lot,” Godlevske said. “If you don’t give yourself those opportunities, it hurts.”

The third quarter was dominated by a series of momentum shifts and scoring runs led by both teams to lock the score 36-36 before a layup from forward Brittany Ward with 18 seconds left broke the tie. Southern Indiana responded with a last second 3-pointer to end the third on top, 39-38.

The fourth quarter featured concentrated amounts of scoring in short bursts from both sides. With less than ten seconds left, the Bulldogs attempted to tie the score at 57 with a three-pointer from Sydney Buck. Instead, Alexa Bailey rebounded the shot and scored to put Butler one point behind.

“We were trying to get as good of a shot as we possibly could while still trying to take care of the basketball,” Godlevske said.

Guard and forward Shae Brey and forward Tori Schickel both fouled out in the fourth quarter.

“We’re all just disappointed in our effort,” Spolyar said. “This should be a win for us, but it gave us a little of a wakeup call.”

Godlevske said he wants to see more “toughness and grittiness” from his team, win or lose.

“That’s our bulldog pride that we talk about all the time,” Godlevske said. “We need to find leadership. If we do, we’ll be fine.”

Next, the team will face East Tennessee State University in Hinkle Fieldhouse on Nov. 11 at 7 p.m.