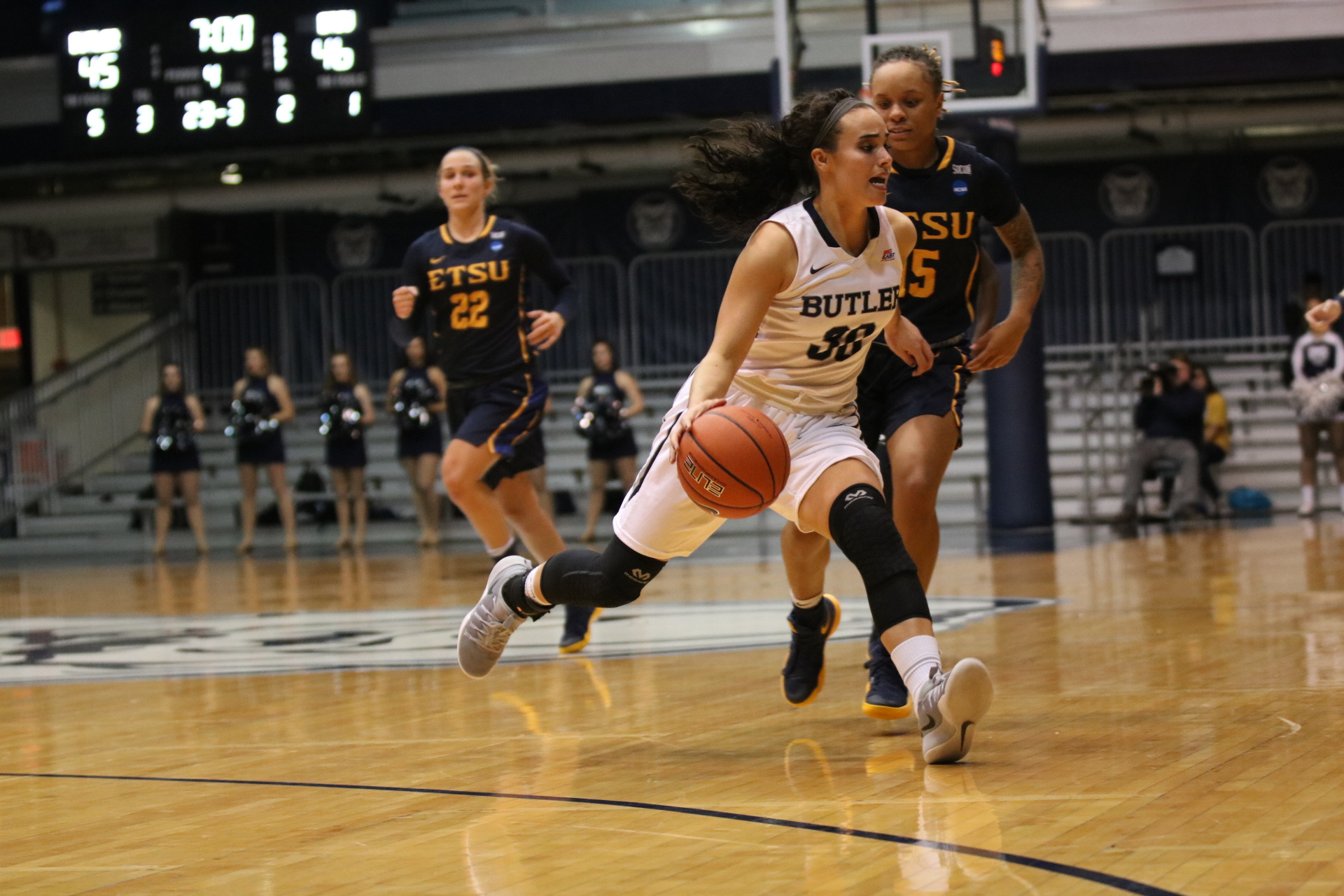 It had been, by anyone’s definition, a long day for Sydney Shelton. Sunday was game day, the second game of the Butler women’s basketball season against Bradley University. Game days are what freshman guard Shelton works for. Game days are what she competes and plays for.

It was a long day, but nothing out of the ordinary for Shelton. She worked through physical therapy exercises to rehab her Achilles tendonitis, grabbed an ice bag and went to chat with family and friends after the game.

If anything was unusual about Sunday, it was seeing the former Indiana All-Star on the bench for game day, hindered by an injury she was working through. Instead, she was cheering from the sideline, giving high-fives when teammates walked by and jumping with the rest of the team when a last second shot gave Butler the win.

It was a long day, but she had one last thing to do before leaving the parking lot of Hinkle Fieldhouse. Shelton picked up her phone and dialed.

Head Coach Kurt Godlevske was not surprised when his phone rang Sunday evening. Caller ID confirmed it was his freshman guard on the other line.

“Hey coach, I just want you to know that I’m going to be doing rehab as many times a day as I can. Everything looks positive and I’m really excited for the direction we’re going in.”

“She didn’t have to call me to explain those things,” Godlevske said, “but that’s the type of person she is.”

Direction is the theme of many conversations, specifically one that points towards a Big East Championship. As one of six new faces on the team, the addition of Shelton’s scoring ability could put the women’s program on the right track.

“I’ve been wanting to play [in college] ever since I was little, like third or fourth grade,” Shelton said. “It’s so rewarding to be here now and think of all the hard work put in over the course of your life and know that it’s paying off.”

Godlevske remembers 29 points in particular, the first time he saw her play as a freshman at the IHSAA Class 3A State Championship.

“She embodies what Indiana basketball is all about,” Godlevske said. “Play hard defensively, know how to play fundamentally sound basketball and score.”

He described Shelton as a “Butler kind of kid.”

It didn’t always look that way. As a sophomore in high school, Shelton verbally committed to University of Kentucky. By the spring of junior year, she was reconsidering options.

“Over time, I decided that wasn’t the place for me,” Shelton said. “I wanted to be close to home, to be able to represent my city and my state.”

As a senior, she signed a national letter of intent for Butler. Her aunt, Julie Shelton, is also a member of the Butler coaching staff.

Shelton’s father, Michael, said Butler is where his daughter belongs.

“For her to find a home where she fit well, I was proud of her,” he said. “Even though she had a lot of opportunities, she considered more than just basketball.”

The practice scene unfolding within Hinkle is quintessential Butler basketball. Balls dribble between patterns of afternoon light stretching across hardwood, sounding between court chatter and the variations of shoe shifts.

Off to the side, Shelton watches the clock. Only it’s not the shot clock she’s focusing on. Numbers flash across the screen of her stationary bike. Five minutes. Ten minutes. This is physical rehab, and her mismatched socks, blue on the left, purple on the right, pedal in even rotations until the trainer says she’s done for the day.

She’s been here before. Shelton suffered a string of injuries her senior year. First, it was a dislocated elbow over the summer. Then, a dislocated fibula in what she described as a freak accident.

“It’s frustrating,” Shelton said. “When you love a game so much you want to know that you can always go play. Not having that option is really tough.”

The freshman said she tried to take her recovery day-by-day.

“Over that time period, I really grew in my faith and as a person,” she said. “Especially off the court. There were so many unknowns, you really have to be mentally strong.”

Steve Doud, her high school head coach, said Shelton was the hardest working player he has seen in 20 years of coaching. He never saw Shelton’s attitude falter despite injuries, and it wasn’t uncommon for Shelton to work with some of the younger guards during practice.

“She never dropped her head like, ‘Woe is me, I don’t get to play,’” Doud said. “She handled it as well as she could for the time and effort she put in the sport.”

Shelton stayed behind after team practices to put in extra work — changing directions, speeds or watching her shots fall in. Two hour practices stretched into an additional five minutes. Sometimes it was an extra hour. Sometimes her dad was there to help. Other times it was just her.

“I want to be the best that I can be with what I’ve been given,” Shelton said. “Maximizing my full potential — I’m in control of that.”

Michael said her passion was always basketball, something his daughter always embraced.

“Even if we might try to balance her the other way and say, ‘You know what, maybe let’s not spend so much time doing this,’ it’s what she loves to do,” Michael said.

“If you give her a basketball and give her the opportunity to go out with her friends, she’ll always choose the basketball,” her father said.

Shelton describes herself as a “people person,” and said the amount of time basketball took away from everything else almost led her to quit. Between middle school and high school, she had her moments.

“It’s tough sometimes,” Shelton said. “Just the time and energy you put into it, the focus — not everything is going to go your way all the time. That’s something I’ve learned. I can’t let basketball let me get too high, I can’t let it get me too low.

“Then you have to remember why you do what you do.”

Shelton started playing basketball when she was five at the local Boys and Girls Club of America. The physicality and competitiveness of the sport appealed to her, but basketball had always been part of her family.

“When she was in a diaper, she had a basketball in her crib,” Michael Shelton said. “We’re a basketball family. That’s just what we do.”

In high school, Shelton initiated devotions and prayers with teammates after practices and before the start of games.

“That was all genuine,” Doud said. “She wasn’t doing it for show or anything like that. That was how she was raised. It shows the person that she is.”

Godlevske sees Shelton’s desire to lead and communicate with others reveal itself in their one-on-one meetings. They’ll talk basketball — season goals, challenges to over, areas of improvement — and they map out the next three years.

“I see her being a very prominent leader within our program,” Godlevske said. “One that can help support and direct the younger ladies with the knowledge of this is how we do it.”

It’s the additional minutes of shooting after practice. One more physical rehab exercise. A phone call to the coach. On and off the court, Shelton strives to do the extra things.

Freshman teammate Kristen Spolyar recalls meeting Shelton during Amateur Athletic Union play when they were eight. Back then, they were on opposing teams. Now, they’re roommates.

“It’s fun. She’s a little crazy and upbeat,” Spolyar said. “We have a good time.”

If there’s 7 a.m. practice, Shelton will be up by 5 a.m., enough time to wrap up extra work and fit in her devotionals.

Tomorrow is another long day. That just leaves a little more time for Shelton to be uncommon.