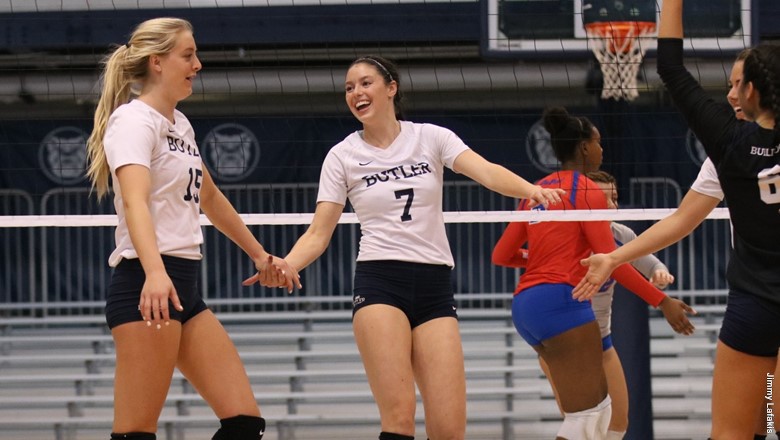 From left, Whitney Beck and Jessica Klingensmith high five each other. Photo via Butlersports.com.

Sophomore outside hitter Anna Logan posted a team-high 18 kills and added 18 digs in the loss. Logan said she understood the circumstances and what was at stake.

“We knew we had to win this one to stay alive,” she said. “We really fought with everything we had.”

Junior setter Makayla Ferguson continued her stellar play. Ferguson added a team-high 41 assists and said the Bulldogs are focusing the season with pride.

“Tonight, we played really well,” she said. “We fought through this season’s adversity, and we want to have a great final game for our senior, Jessica Klingensmith.”

“II told my team that I am proud of them,” she said. “After all the things we have been through, we have still achieved a lot of success.”

The Bulldogs will conclude their season at Hinkle Fieldhouse on Sunday. The match against DePaul University will begin at 1 p.m.