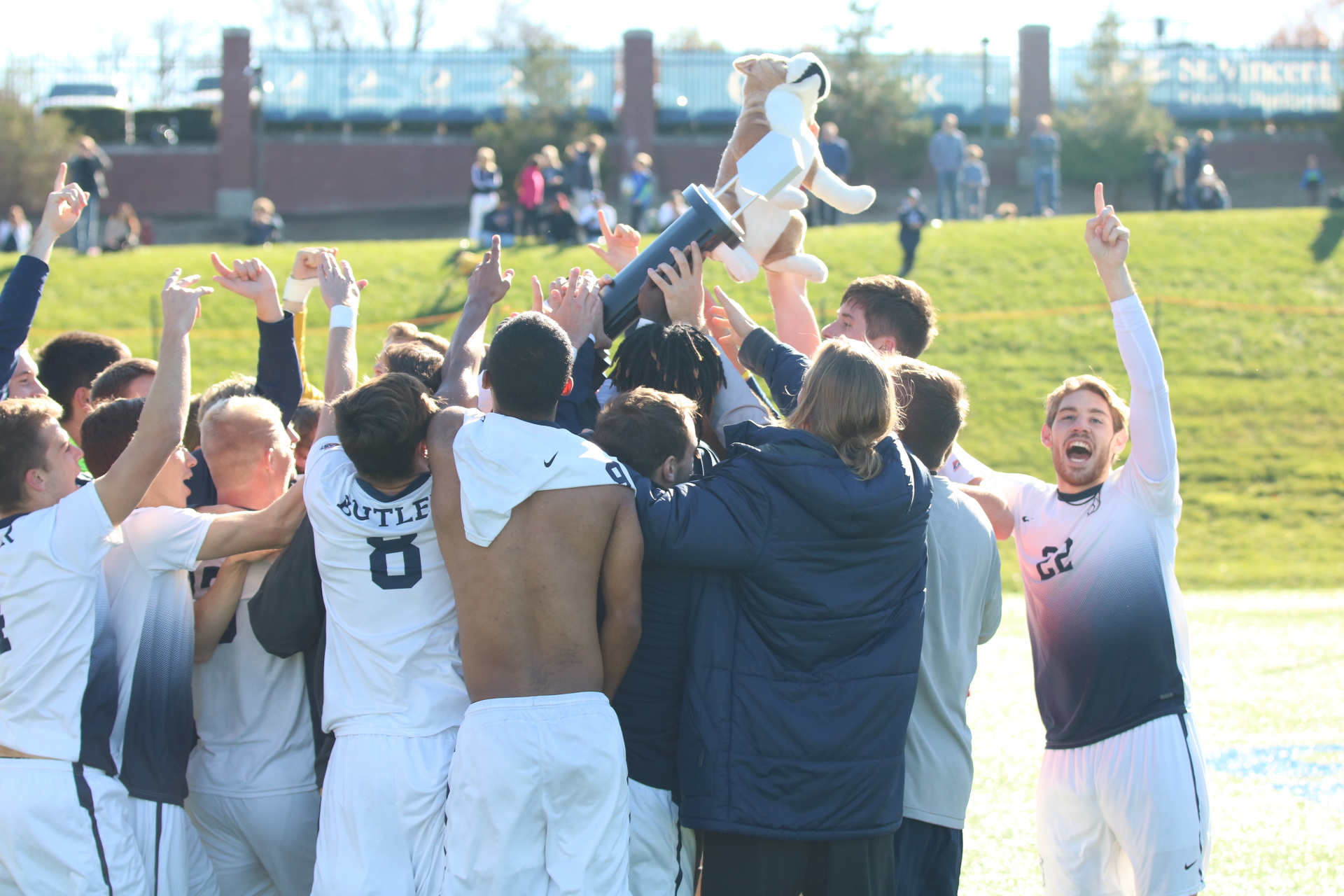 The Butler men’s soccer team celebrates with the trophy after defeating Creighton to win the Big East Championship. Photo by Jimmy Lafakis.

After building a two-goal lead heading into the final 30 minutes, the Butler University men’s soccer team held on for a 2-1 Big East Championship victory over Creighton University Nov. 13 in the Butler Bowl.

“The win was just huge,” Butler goalkeeper Eric Dick said. “Great effort from everyone, and now we get to play another day. It’s a great feeling.”

The game began with a rush of shots from both teams; senior David Goldsmith had a shot bounce off of the post in the fifth minute.

Freshman Isaac Galliford scored the first goal of the match in the 36th minute from the left side of the box. It was his fourth goal of the season. He was assisted by redshirt sophomore Marco Charalambous.

Butler led 1-0 at halftime. They built on their lead after a cross in the box from Goldsmith was finished off with a header from junior Eric Leonard in the 63rd minute.

Creighton’s Myles Englis scored to put the Bluejays on the board in the 66th minute. That was it. Butler ran the clock out to win 2-1, claiming the Big East Championship.

Butler coach Paul Snape said he knew his team was going to work hard during the match.

“It was just [a question of] if we were going to manage the difficult moments,” he said. “They just got stronger and stronger, and I’m incredibly proud of everybody.”

This is Butler’s first Big East championship in men’s soccer. Their last conference championship was in 2010, back in the Horizon League. It marks the sixth time Butler has been in the NCAA tournament.

Dick, Goldsmith, Leonard and Jared Timmer were named to the Big East All-Tournament team, and Dick was named most outstanding defensive player.

Goldsmith, who was named most outstanding offensive player in the Big East tournament, said the senior leadership off the field has driven the team forward.

“We all have different attributes,” he said. “One day, we might be harsh on the guys. The next day, we might be best friends. Together, we’re a really great group that complements each other.”

Creighton outshot Butler 14 to 10. Dick got the win with six saves, and Butler outlasted five corner kicks in the second half from the Bluejays. Snape said defense was a big key throughout the game.

“When you’ve got Eric Dick in goal, you know you’ve got a chance,” he said. “You know he’s going to make great saves and he doesn’t let in easy goals.”

Midfielders Derek Sutton, Bennett Kim and defender Michael Peay all saw action off of the bench. Dick said the win was a collective effort from everyone.

The Bulldogs earned a No. 15 seed in the NCAA Tournament on Nov. 14. Butler will host the winner of Michigan State University versus Southern Illinois University Edwardsville at the Butler Bowl on Sunday. They have seen both these teams earlier this season, topping Michigan State in an exhibition game 3-2 on Aug. 20 and beating SIUE 2-0 Sep. 3.

“Yeah, we know them,” Snape said. “But we also know they’re both quality. We certainly won’t underestimate the team who gets through.”

Goldsmith said there are still goals left to meet for the team.

“NCAA champion, that’s the number one goal,” Goldsmith said. “It’s fantastic that we’re still able to do that. I’m looking forward for our next game. Hopefully, we can get on a roll and keep this thing going.”