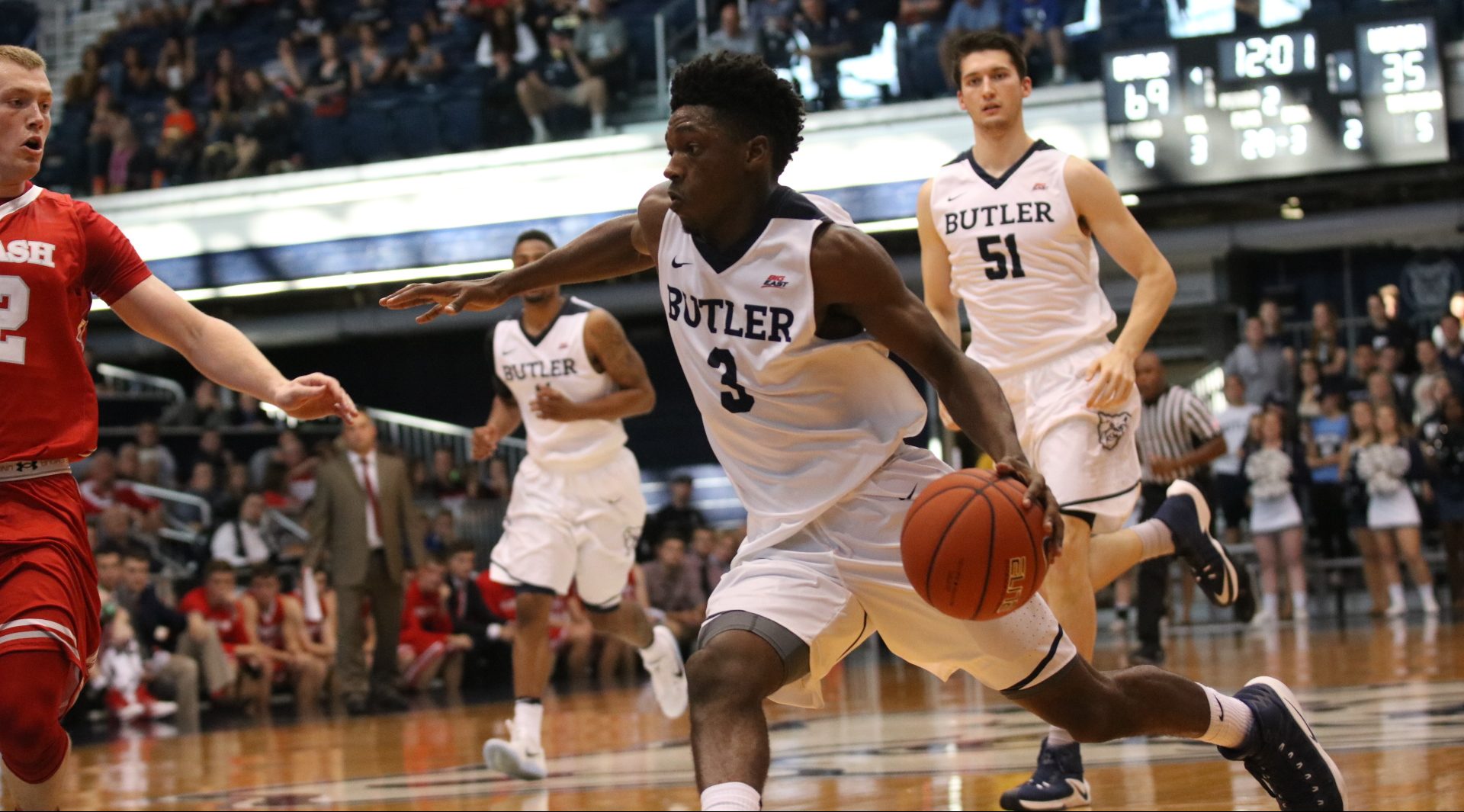 Freshman guard Kamar Baldwin drives to the basket during an exhibition game against Wabash College on Oct. 30. Photo by Jimmy Lafakis.

People notice when Kamar Baldwin plays basketball. It is easy to observe his impressive dribble moves, his smooth left-handed shot or his 44-inch vertical jump, but the invisible things make the freshman guard special.

Baldwin honed his skills in his hometown of Winder, Ga. He averaged nearly 30 points and 11 rebounds per game in his senior year for the Apalachee High School Wildcats. He scored 2,593 points in high school, the most ever by a Barrow County player.

“When I look back, I feel special because I was a part of a community that cared,” Baldwin said. “I will remember the countless days of having fun, seeing people smile and enjoying one another.”

Apalachee head coach Kevin Morris worked with Baldwin during his four years. Morris said his statistics were impressive, but his character spoke volumes.

“He always acts like he has done it and been there before,” Morris said in a phone interview. “He knew his role, whether that was at our school or in AAU. He did things the ‘Butler Way’ before he came to Butler.”

Morris said he took note of Baldwin as early as fourth grade when the two-time Region 8-AAAAA Player of the Year led the charge.

“You have a kid coming in every day at 6 a.m. to get better,” he said. “Fifteen kids joined him. He wasn’t just our best player, he was also our hardest worker.”

Morris said his former player boosted Barrow County’s interest in basketball. He also said the intrigue has carried over into this year.

“In Georgia, we joke that basketball is our third-favorite sport,” he said. “It is right behind football and spring football. Because of Kamar, there are more Butler basketball fans in Winder, Ga, than ever before.”

Recruiting website Rivals ranked the three-star recruit 123rd nationally. Apalachee assistant coach Dan Woschitz said even though Baldwin was recruited by Clemson University and Providence College, he feels Butler is the right fit for the guard.

Baldwin listed loyalty as one of his core values because his parents told him to treat others how he would like to be treated. Woschitz said he noticed that loyalty in him from the start.

“He has always been loyal, no matter what,” he said. “He was not self-centered at all. He has learned how to play within a team.”

Baldwin scored 13 points in his first game. He went 4-4 from the field and 5-5 from the free throw line against Wabash.

He went 3-7 from the field and scored six points on Nov. 5 against SVSU.

“To me, being a Butler Bulldog means being tough,” Baldwin said. “We hold each other accountable. We do what is right, not only for ourselves, but others as well.”

Freshman center Joey Brunk lives with Baldwin in Butler’s Fairview House. He said he has enjoyed getting to know his teammate and admires his work ethic.

“I love Kamar like a brother,” he said. “We hit it off right away. He is a workhorse and always gets after it.”

Redshirt freshman guard/forward Sean McDermott spent time with Baldwin on and off the court over the summer. McDermott said Baldwin motivates him to become better.

“We always do different drills that we incorporate into our games,” McDermott said. “We play one-on-one and work on moves and ways to score. When we lift together, we make sure we attack each repetition.”

“He is a heady young fellow,” he said. “He asks questions, but figures a lot of things out his own. He has the ingredients needed for success at a high level.”

Although Baldwin made waves as a Wildcat, he only scratched the surface. He said he has a community of people rooting for him back home.

“Not a lot of people make it out of where I’m from,” Baldwin said. “Barrow County has my back. I have people that care about me and want me to succeed.”