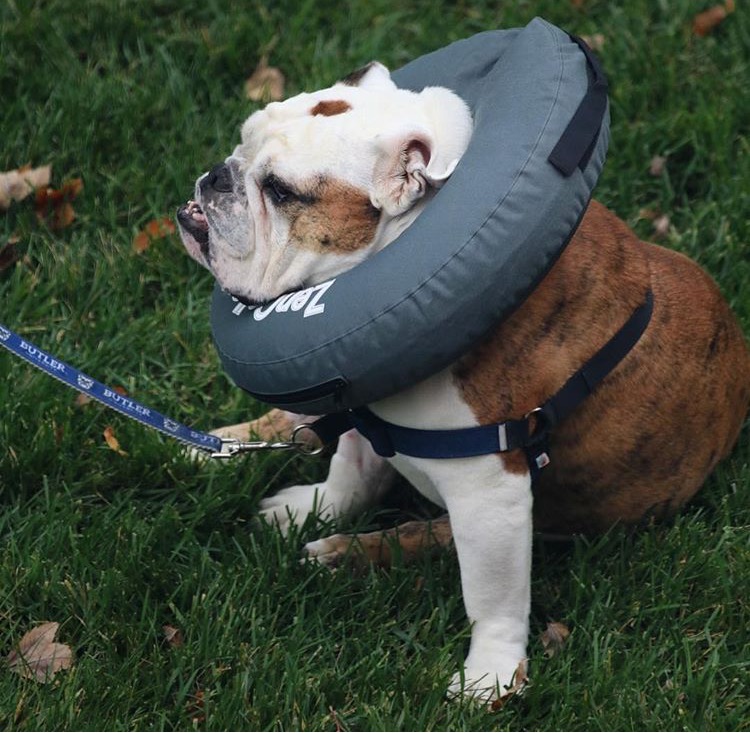 Trip sits outside wearing his protective collar after his surgery. Photo by Jimmy Lafakis.

Trip scared his dad Michael Kaltenmark when his little leg gave out.

Butler Blue III, also known as Trip, is an English bulldog who serves as Butler’s live mascot. He partially tore his ACL in his right hind leg on Sept. 28. He is scheduled to be away from the public for 8-10 weeks.

Kaltenmark, Trip’s caretaker, said he is not exactly surprised about the injury.

“Trip is a hard charger,” Kaltenmark said. “He has always been very spirited, and he hustles to wherever he goes.”

Kaltenmark said he wanted Trip to have surgery to prevent any further pain. Dr. Brian Martin of MedVet Indianapolis performed a tibial plateau leveling osteotomy, which stabilizes the joint in his leg, on Trip Oct. 18.

The surgery stabilizes the knee by making a curved cut in the top of the tibia bone. Martin said working with Trip was a challenge because of his conformation and inherent respiratory risks, but also said he was a great patient.

“He is quite a ham,” Martin said. “He will do what he can to keep the attention focused in his direction and has that talent nailed. I enjoyed operating on him because he is definitely a tough bulldog.”

Kaltenmark normally brings Trip to help deliver admission packets to high school students who have been admitted to Butler. Since Trip is injured, Kaltenmark said he came up with a different plan involving Trip’s sister, Phoebe and her grandchildren, Daphne, Trixie and Peanut.

“We’re still going to local schools around Indianapolis,” Kaltenmark said. “Trip’s sister and the puppies are going to take Trip’s place delivering the packets for now. We are going to try our best to turn this situation to a positive one.”

Trip is also a part of the Hinkle Fieldhouse gameday fabric. Butler graduate Evan Krauss, who now works for Butler’s marketing department, gave Trip a dog bone before men’s basketball games the last two years. Krauss said he was deeply affected by the injury because he created a strong connection with the bulldog.

“He is more than just a dog to me,” Krauss said. “I go to work and do my dream job every day. I truly owe my success to him, the program and everyone involved in it.”

Junior forward Tyler Wideman said he has built a special relationship with Trip and the Kaltenmark family over the last three years.

“Michael and the rest of the family are very welcoming people,” Wideman said. “Now that Trip had his surgery, I know he will receive tons of love from Butler students and fans. He will bounce back.”

“You never want to see a brother hurt,” Chrabascz said. “It is definitely sad because he always brings a smile to your face when you see him on the court.”

Butler basketball team photographer Zach Bolinger said he will miss taking photos of his favorite dog while he is sidelined. Bolinger said Trip’s patience and work ethic make him a special breed.

“He is always a trooper,” Bolinger said. “I always try to come up with different ideas for our photos, and he has gotten so used to getting his photo taken that he is a pro. After watching him do his thing at games, I told Michael that he just may be the most photographed dog in America.”

Sophomores Kaitlin Doud, Jenna Foreman, Audrey Cyr and Alexandra Wilson live directly above Trip and the Kaltenmarks in Butler’s Apartment Village housing unit. They showered their neighbor with dog treats and get-well notes before Trip’s surgery. Doud said she and her roommates felt a desire to do something special for Trip.

“Trip is part of the family,” Doud said. “We just wanted to show Trip that he was in our thoughts. It was really cool when we saw a thank-you post on his Snapchat.”

Cyr said she can empathize with the Kaltenmarks. She said she wanted to let the family know their neighbors were thinking of them.

“It really hits home for me,” Cyr said. “I know when my dogs had surgery, it was definitely hard on our family.”

“Coming from another school, it is inspiring to see the love Butler has for Trip,” Montgomery said. “He is the face of Butler, and I can tell he really helps with campus inclusion and pride. Even if it’s just with an Instagram like, I enjoy following his adventures.”

“It is easy to see that he brings joy to a lot of people,” Hearon said. “He won me over when he changed his mind about swimming but slid into the pool anyway.”

Kaltenmark said he is disappointed his beloved dog is currently physically unable to perform normal activities. He said Trip’s absence is definitely felt, but he remains optimistic for Butler’s furry friend.

“Even the greatest athletes get hurt from time to time,” Kaltenmark said. “He may be on the PUP list right now, but I have a feeling he will come back stronger than ever.”