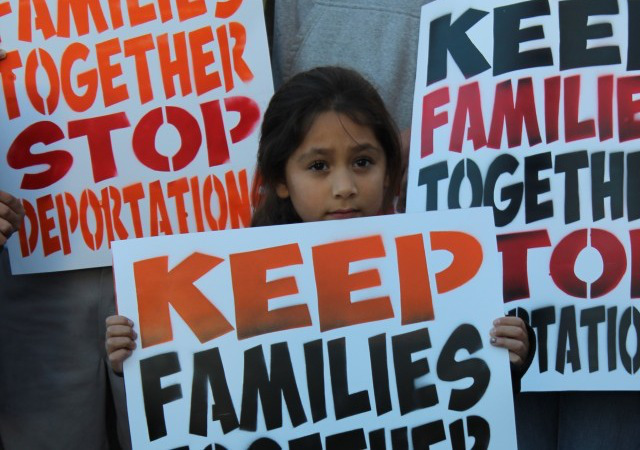 The investigative reporter from Arizona shared true stories of deportation, separation and detention of immigrant families from her book, “Detained and Deported” to a crowd of about 40 Butler students and faculty.

Photo Courtesy of Butler Collegian photographer. Regan’s passion for the justice of immigrants led her to talk about how deportation impacts families.

Many immigrants end up in a detention center like Eloy because they were brought to the U.S. decades ago as children by their parents and resided in the U.S. through adulthood without proper documentation.

The immigrants Regan talked about held stable jobs, started their own families and contributed to American society. Despite this, the immigrants faced detainment and separation from their children because they lacked legal documentation to reside in the United States.

Regan’s passion for the justice of immigrants was evident throughout her talk. She became especially emotional when she spoke about Alaina, a woman from Mexico whose two-year-old daughter was taken away by U.S. immigration authorities. Unlike her daughter, who was born in the U.S., Alaina was an undocumented immigrant.

Regan recalled witnessing the moment when Alaina reunited with her daughter, in Mexico, several years after their initial separation.

“It was an astonishing thing,” Regan said.“I never thought it would happen.”

Various students in the audience attended Regan’s presentation for a class, but the topic of immigration is relevant for all Butler students and American citizens.

Immigration is a major, pressing issue discussed in American politics today, especially regarding the Mexico-United States border. This topic directly affects Butler students with the upcoming election fast-approaching and both Donald Trump and Hillary Clinton having made statements on their immigration policies.

Working immigrants are part of the U.S. workforce — whether legal or undocumented they hold jobs in our economy.

Regan shared a quote from President John F. Kennedy to emphasize the natural presence of immigrants in the United States.

“Every American who has ever lived, with the exception of one group, was either an immigrant himself or a descendant of immigrants,” the late president said.

Regan’s speech is the second installment of a three speaker series called Border Crossings. The last talk, “Lives in Transit: Economies of Violence, Intimacy and Care along Central American Migrant Routes in Mexico”, will be given by Wendy Vogt, an assistant professor at IUPUI.

Her talk highlights a major, yet often overlooked aspect of immigration– the growing population of undocumented Central American migrants in Mexico, according to the Butler Connection.