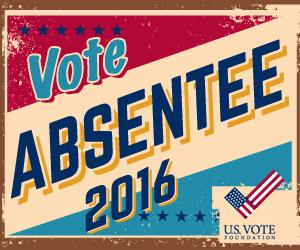 The 2016 election is right around the corner, and although some Butler students live in the Indianapolis area, some live elsewhere and need an absentee ballot to vote.

Butler’s student population represents about 35 states across the nation. Most of these students are of voting age and can participate in the election on Nov. 8. In order to do so, students registered to vote who cannot go home to vote must apply for an absentee voting ballot.

Absentee voting is also known as “mail-in voting” and “by-mail voting.” It is completed by sending in a mail-in ballot before Election Day. Most students use this method.

First-year Connor Riley is from Massachusetts and shared his experience with this process.

“I just looked up the absentee ballot for Massachusetts and it popped up right away with how-to steps.” Riley said. “I had to send in my application, and, within a week, they send you a ballot which you fill out and send back.”

Each state’s deadline to register for the absentee ballot vary. The deadlines for every state can be found online.

First-year Natalie Koch is from Hawaii. She said the process was very simple.

“The first thing I did was Google it and the steps popped up right away,” she said. “I downloaded the document and mailed it to my city and county. It’s definitely easy and accessible to everyone.”

Koch continued by joking about this being her first election.

“It’s my first election and I’m not even in my hometown.” Koch said. “But still, it’s really easy even though I’m not home.”

Senior Maggie Fuhrman is from Illinois and this is the first time she had to request a ballot. Before, she would just vote at smaller elections in her hometown.

Fuhrman explained she went home over fall break and filled in the application there so she did not have to mail in the request form. They sent the ballot in the mail directly to her resident dorm.

“Everyone should exercise their right to vote,” she said. “Even if they are unsure of who to vote for, they should still go vote because our government is set up so that we have a voice.”

Voting is also very important to first-years Riley and Koch.

Koch shared a similar belief in regards to voting.

“Voting is very important; being an American we have that freedom and privilege,”

Koch said. “We should have our voices heard.”

The actual voted absentee ballot is due on Election Day, so allowing a few days to mail the ballot is necessary.  Some states require the voted ballot to be the day before Election Day. All due dates can be checked online.

Mailboxes can be found at the front of residence halls, in apartment lobbies or in the Holcomb Building Mail Center, Room 21.