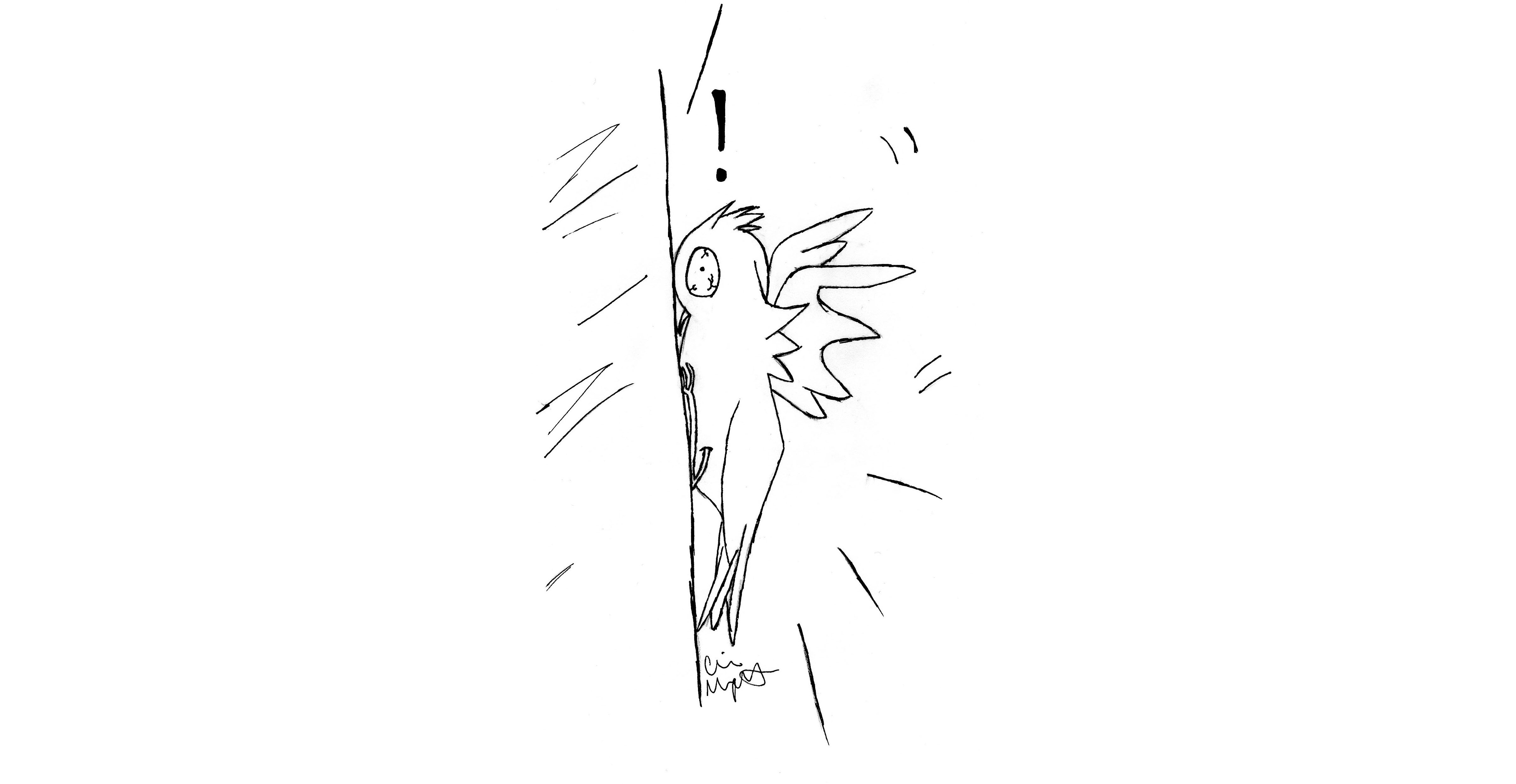 Biology professor Shelley Etnier and Charlotte, her 5-year-old daughter, walked around Gallahue Hall. They were not taking a leisurely stroll or walking the dog.

They were hunting for dead birds.

“For [Charlotte], it was like searching for Easter eggs,” Etnier said. “She’s a biologist’s daughter. So she’s like, ‘Mommy, I see one! It’s a Swainson’s Thrush!’ She was head over heels. She was so excited to find this dead bird.”

Etnier — along with Travis Ryan, head of the biology department, and Julia Angstmann, director of the Center for Urban Ecology — has been studying the dead birds around Gallahue Hall, Holcomb Building and the Pharmacy and Health Sciences Building.

The cause of death? Flying into windows hard enough to cause bleeding in the brain.

“This is a consistent and recurring problem in cities across the world, and, as we start to urbanize more, we strive to understand what’s the impact of buildings on birds, why they’re hitting, what is it about their wing mechanics that makes them hit and how can we develop our cities to minimize the death of birds from window strikes,” Angstmann said.

During the spring and fall — the migratory seasons — Angstmann, Etnier and Ryan circulate the buildings twice daily for three weeks, every single day at the same time. This fall, they have found one to two birds every day, mostly located in front of Gallahue or by the skywalks connecting the buildings.

Etnier said those locations make sense because there are big windows reflecting the skies and trees or there are windows on both sides, making the birds think they can fly through.

One of the study’s goals is to influence the designs of both Gallahue and its new biology building.

Angstmann said there are several architectural solutions for the windows, such as making them pockmarked or etched, but it is expensive. A cheaper method would be angling the windows a certain way or putting stickers and banners on the windows to break up the expansive windows.

The timing of the science expansion construction project and the study are in sync. As they’re collecting data, the architects are creating the designs.

Jonathan Hess, president of the Browning Day Mullins Dierdorf architecture firm, is the partner in charge of the project. He has worked with Butler University for 25 years and designed the front and back of Atherton Union.

“What we’re doing in the planning right now is using a ceramic frit,” Hess said. “It’s whitish in color, so it reduces the surface reflection on the glass. We’re trying to avoid areas where a bird might see completely through. In some areas, we have completely opaque glass and some areas we’ve changed the gradient to be more transparent, so we allow a view out as well.”

Opaque glass also controls the amount of light and heat let into the building, making the buildings more sustainable.

Daniel Overbey, director of sustainability at the architecture firm, said the project could receive “extra credit” from Leadership in Energy and Environmental Design, a third-party verification for green buildings.

Hess said people can see past the ceramic frit on the inside of the glass, so the view of outside is not hindered.

“The architects here are very interested in not having [the birds strikes] happen,” Etnier said. “It’s definitely a concern. But you have to balance the aesthetics and the economics.”

It is not possible to change the birds’ migratory route, so it becomes the architects’ jobs to design a building aesthetically pleasing, financially reasonable and fly-zone friendly.

“From what we’ve done, research[ed] and communicat[ed] with people who have been studying this certainly longer than we have, we’ve gotten to an appropriate balance of cost, aesthetics and performance,” Hess said. “All of those things ultimately have to be taken into account. You’re solving multiple things concurrently. Our experience tells us if we’re planning correctly out in the future, we’re in good shape with the birds.”

“We want to be responsive and responsible as design professionals,” Hess said. “That’s why I like to work at universities. There are many levels at which you can teach and many levels that you can set examples. Being a sustainable campus and being mindful of all these things is high on our list of values. We share all our values and emulate those, hopefully, in our products.”

The firm is fine-tuning the design plan over the next six months, and if the study finds something that does not align with their design, Hess said they would strategize with Butler on how best to respond.

“The decision that we make with how we treat the glass, how we protect the glass or how we design the glass to block some of the sun — all of that’s going to make an impact on energy, the feeling of comfort inside of the space, how will bird strikes be reduced,” Overbey said. “All those factors come into play with how we design that glass.”

Not only are the professors and Angstmann investigating where the birds are dying, but which species and why those species.

More than half of the birds are Swainson’s Thrushes, a species not common in the area.

“It may have something to do with how Swainson’s Thrushes fly,” Etnier said, whose main area of research is biomechanics.

To test a bird’s wing speed, Etnier places the bird on a scale in front of a fan. When the fan turns on, the bird’s wings lift, causing the scale to rise, ultimately measuring the wing’s lift. If a bird does not cause enough lift — such as a Swainson’s Thrush — the wings have to flap faster.

The faster the bird flies, the harder the impact.

The study is currently restricted to the three buildings on campus, but both Etnier and Angstmann said they are hoping to expand the study to other buildings and, eventually, other universities in the Indianapolis area.

First, they said they want to perfect the procedure so it is easy to follow and remains standardized for all areas.

“They may already be monitoring some, but we can all do it so we’re using the same protocol and use the data cumulatively,” Etnier said. “We’re hoping to build this project [and] to make it for [all of] Indianapolis, as opposed to just Butler.”

Angstmann said to expand the research just on campus as they need more help.

CUE has two internship opportunities open and are looking for volunteers. These internships offer credit for biology, science technology and society and environmental studies majors.

“I think there’s the ability to engage two types of students. One that’s really interested in biology and has some of that coursework, and another student that maybe doesn’t have that biology focus, but can engage in another way,” Angstmann said. “Student volunteers would be a huge help for us, and that can be anyone regardless of their background.”

Students can help with other aspects that affect the bird strikes, such as measuring windows and how far a building is away from trees.

“I’m a biology geek, so I’m used to people being excited about freezers full of dead animals,” Jedlicka said.

Jedlicka grew up in an environmentally conscious household, where her mother takes care of the birds in their backyard.

“Some people may think of it as gross, but on the other hand, this is a way to get something good out of it,” Etnier said. “To me, it’s kind of a neat way to look at something that’s kind of sad, but turning it around for helpful information.”