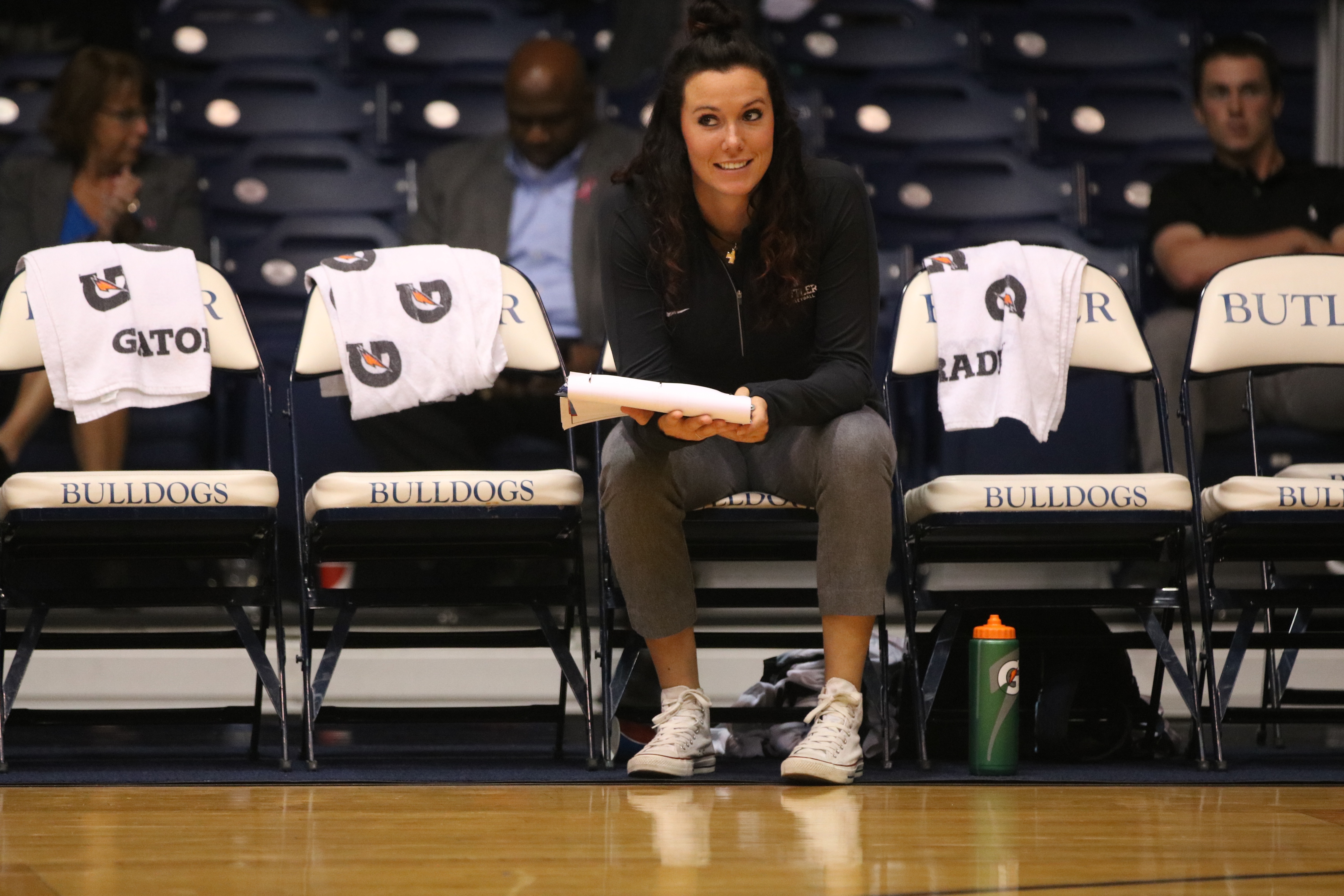 Assistant Coach Andrea Baylin coaches from the bench during a match against Providence College. Photo by Jimmy Lafakis.

Andrea Baylin stumbled into this job. The territory was familiar, but the position was foreign.

Two weeks before the 24-year-old accepted a job as a Butler volleyball graduate assistant, she waited tables at the Rusty Bucket on 86th Street.

Baylin, who hails from Dublin, Ohio, was a three-year volleyball captain at Southeast Missouri State University in Cape Girardeau, Mo. She amassed more than 1,000 digs as a Redhawk and came to Butler in summer 2015 to begin graduate school for her master’s in School Counseling and a license for Mental Health Counseling.

Baylin said she felt secure after working at the Rusty Bucket for over a year, but her world changed when head coach Sharon Clark contacted her about filling an open spot.

“I sure was nervous for that interview this summer,” Baylin said. “Sharon is a tough interviewer, so I definitely couldn’t tell if I got the job or not.”

The scenery change also gave way to an attitude adjustment. Baylin said graduating from Southeast Missouri State and transitioning to coaching made her realize she had to alter her perspective on volleyball.

“I was that super-competitive volleyball girl my whole life,” Baylin said. “Now that I am a coach here at Butler, I have tried to tone my competitiveness and intensity down a few notches to help make the girls feel more at ease.”

Baylin said being a Butler graduate assistant is different than any other position she has heard of through volleyball circles. She said Clark has given her the reins to assist with scouting reports and work with players individually.

“This program is so hands-on,” Baylin said. “I couldn’t imagine doing what I do here anywhere else. I really do believe that Butler is a special place with special people everywhere.”

Baylin played both outside hitter and libero while at Southeast Missouri State and said she works closely with Butler’s defensive players. One of these players is another new face. Christina Porada is a junior defensive specialist and George Washington University transfer .

“She’s really great to work with because she has been there,” Porada said. “She looks specifically for things to help you with and explains them in ways that are easy to understand and apply. She has a get-it-done attitude.”

“We connected and now have a great relationship because we are both competitors,” Ferguson said. “We have the same mentality, she pushes me and I really appreciate that.”

Ferguson, who leads the Bulldogs this year with 707 assists, said Baylin helps her maintain a positive attitude during practices and matches.

“She helps me keep my composure,” Ferguson said. “Even when things are not going the way we want them to, she is still supportive. We enjoy having her around because she can relate to us, which allows us to be more comfortable around her.

The Bulldogs currently stand at 13-7. This season’s record is already an improvement over last year’s 12-19, and Baylin said she believes she was meant to be at Butler.

“This happened so fast,” Baylin said. “It’s just crazy. I planned on working in this restaurant forever, and now I am an assistant coach at Butler.”