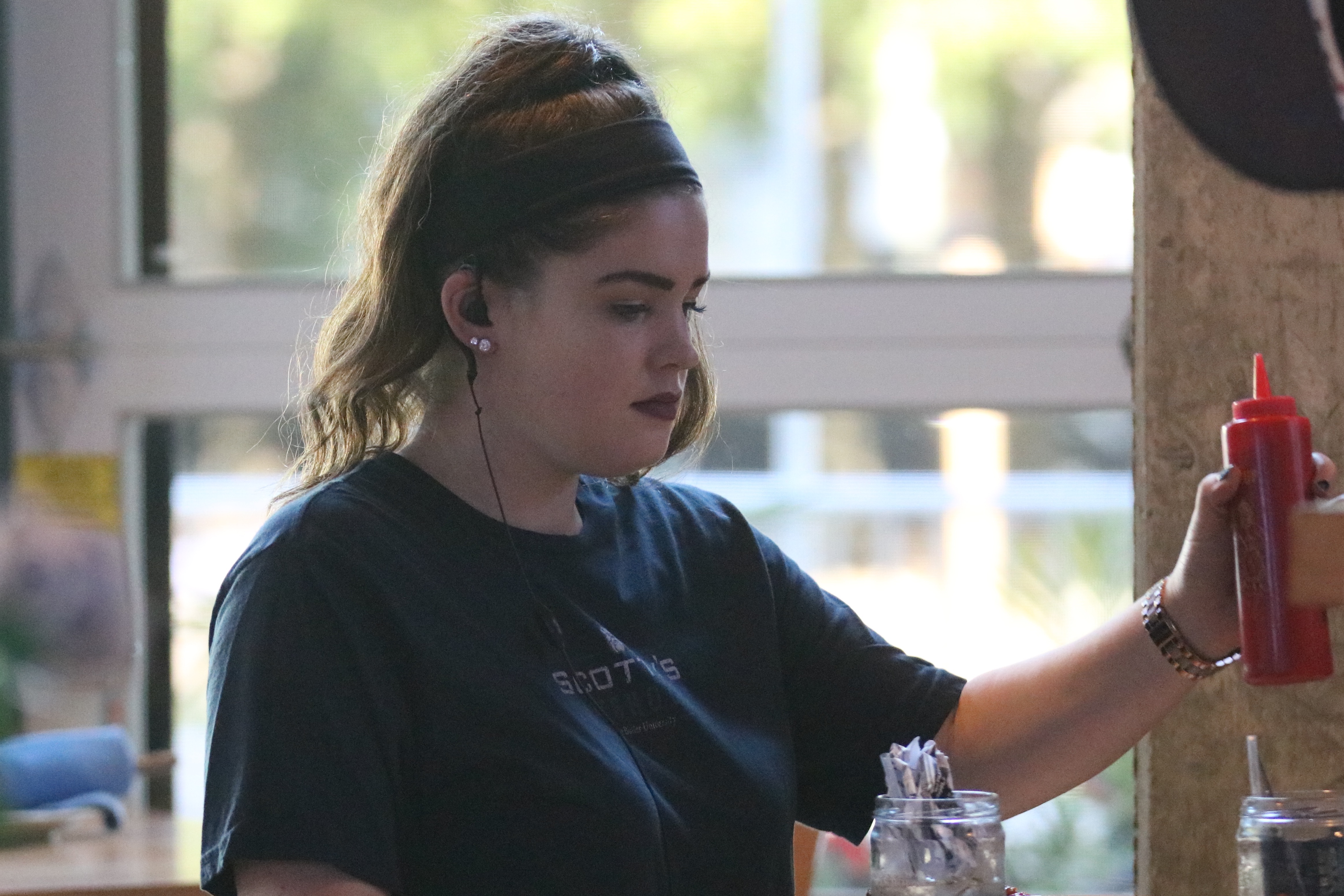 The once-vacant areas in the parking garage on Sunset Avenue are slowly being occupied by businesses. Those businesses are looking for student employees.

Walking into Scotty’s Dawghouse, there are bleachers for customers to sit. Above these bleachers hangs Butler Blue II’s original jersey, framed with a picture of him. Past the bulldog, is a wall labelled “The #Dawghouse Family” where customers have posted pictures of their dogs, some featuring their dogs on campus.

Justin Timberlake’s “Cry Me A River” plays in the background, underlying the restaurant’s conversations in the high tables, the booths and the bar seating in front of the brick wall with Butler University’s fight song painted on it.

The majority of those seats are filled by students and members of the community. They were shown to theirseats and waited on by Butler students.

Emily O’Neal, program assistant at Internship and Career Services, works with off-campus employers, like Scotty’s, who want to recruit students.

“That is helpful because a lot of the clientele that will come into the restaurant will be other Butler affiliates,” O’Neal said. “It will be nice to have that working relationship there.”

McGlinch said a definite majority of the applicants and actual employees are students.

“It’s a good time,” Raleigh said. “There’s lots of energy from customers and employees, which is what I look for. I go there even when I’m not working.”

Stadium benches line the lobby of the restaurant. – Photo by Jessica Lee

He said the employees like to play little silly games while working, like racing to get the straws ready.

Pita Pit, another restaurant opening in the parking garage this October, is owned by Butler alumnus ‘03, Travis Sealls. Sealls is also planning on hiring Butler students.

“From speaking personally, I know Butler students are very high caliber,” Sealls said. “We know they will be very hardworking and all those wonderful things we’re looking for in employees.”

As a student, Sealls worked on-campus as a lifeguard and then later off-campus as a server at Chili’s.

“Having opportunities right on campus would have been awesome back then,” Sealls said. “But we didn’t really have that like they will now.”

McGlinch said this specific Scotty’s location has more employees than their busiest restaurant because they work around the students’ busy school schedules.

“Our philosophy is school first,” McGlinch said. “These are kids. They’re studying, working hard to get their degree, and whether they’re paying for their car insurance or extra spending money, whatever the reason, so school comes first.”

Raleigh said their work schedule is very forgiving. As long as he communicates his personal and academic schedule or needs to drop a shift, the managers are understanding.