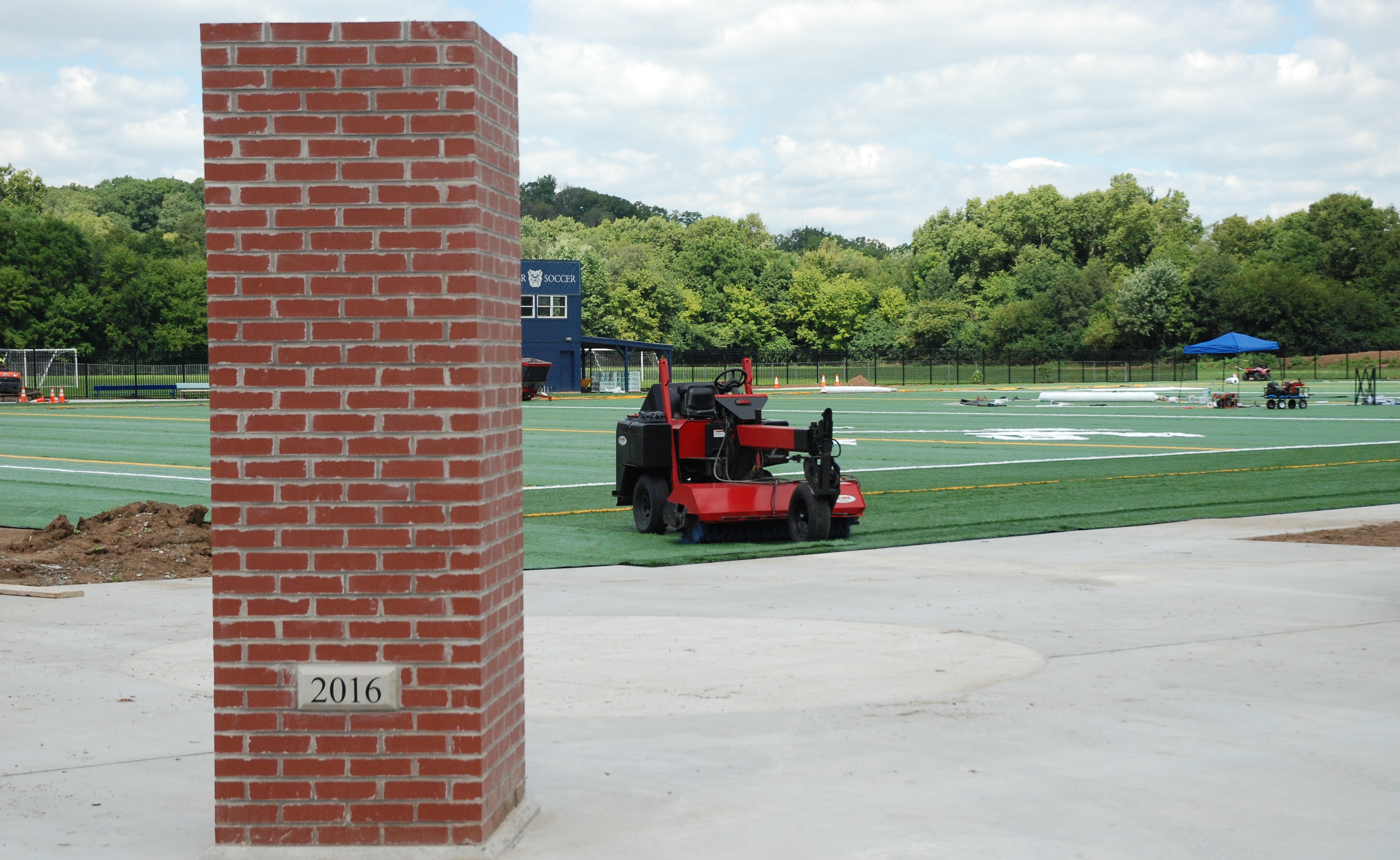 Crews are preparing the new lacrosse field for the upcoming spring season. Photo by Michael Brown.

A quick drive through the I-lot of campus, the parking lot abandoned by cars gone for the summer. An observation of curiosity that started when workers began transforming dirt into a layer of turf.

If anything, a brief glance to remind herself that the Butler women’s lacrosse team had a field. A field for a season defined by the unknown—green bound by white sidelines, and 100 yards of green turf spanning goal to goal.

They had a field, and in just a few months she would join her team for their first practice.

Within a matter of months, Burger went from playing for the school’s club lacrosse squad to participating on a Division I team.

“It’s surreal,” Burger said. “It doesn’t feel like it’s happening yet. I don’t know when it’ll fully hit me. It’s just something that doesn’t seem like real life, and I don’t know if it’s a dream.”

Barry Collier, vice president and director of athletics, announced the addition of women’s lacrosse, making it the school’s 20th sport.

“Women’s lacrosse adds to our wide offering of varsity sports, which provide exceptional  student-athlete experiences and are a source of pride and unity for Butler undergraduates, alumni, faculty, staff and friends,” Collier said at the time of the announcement.

Women’s lacrosse will be a scholarship sport, however the athletic department declined to comment further regarding how many scholarships will be given to lacrosse athletes and how much they will receive.

“Someone first told me about the tweet, and I didn’t think it was actually happening,” Murphy said. “I thought they were lying to me and that maybe it was a men’s team.”

For Murphy and Burger, reality set in the spaces and cracks of their transition into Division I athletes.

It was the first email containing summer workouts from the assistant coach. It was opening up new practice gear, the 6:30 a.m. conditioning sessions and meeting the team expectations outlined in a Powerpoint.

On a 33-women roster, nine played for the club team. The remaining players are first-year and transfer students.

Haley Hallenbeck is one of five transfers on the team. The junior played two years of Division I lacrosse at Bryant University in Rhode Island before deciding it was not the right fit.

Lacrosse brought her back home. Living in Indianapolis, Hallenbeck’s parents heard about Butler’s newest sport. A succession of phone calls and meetings with the coach, transfer advisor and a campus tour convinced Hallenbeck that Butler was the spot for her.

She said the team has already started to bond, despite the diversity in age, experience and adjusting to a new school. The unity lies in envisioning a future for the team.

“We get to create the legacy we want for the women’s lacrosse program,” Hallenbeck said. “I think that is a pretty remarkable thing to be able to do as a junior transfer, and even the freshman coming in. We get to create what we want this program to be. I think that’s a great opportunity.”

While optimism remains high, the team acknowledges challenges ahead — on and off the field.

“Everyone on the team and the whole athletic department is going through this first year together and trying to figure out how to go about it, how to manage our time well and how to fit into Butler’s campus as a whole,” Murphy said.

In terms of following NCAA standards, the process of adding a sport is relatively simple, Molly Sullivan, associate athletic director for administration, said. The school must notify the NCAA and ensure the game schedule meets the minimum requirements.

Pilson said the roster will be finalized in the upcoming weeks, because the team has yet to go through consistent  practices. They are waiting to see if players will choose to quit the team or not.

The impact of adding lacrosse extends beyond just the players. Pilson said he hopes the sport will promote Butler across the country, something the men’s basketball team has already accomplished in part.

While most Butler students are from the Midwest, Pilson has recruited players from all over the country—including New York, Maryland, Virginia, Florida, Texas, California and Colorado.

“Once those student athletes see what Butler is and understand the ‘Butler Way,’ they seem to be very attracted to the institution,” Pilson said.

Hallenbeck also noted the role of geography in bringing women’s lacrosse to Indianapolis. She said the addition of lacrosse is the result of Butler following a trend.

The sport is spreading inward from each coast and converging in the middle. She said there is no reason Butler cannot develop a lacrosse program the way University of Notre Dame and Northwestern University have.

“It’s going to be a challenging year, but we have a positive attitude, and I think that we have big expectations,” Hallenbeck said. “We’re already working hard to meet those goals.”

Off the field, Burger said the team is focused on creating a family-like environment in the Hinkle locker room.

“We’re coming from a school where this is the first year it’s a Division I program,” Burger said.  “I think a lot of people don’t expect a lot of us, because we’re a young team. We’ve got to do our best and give 110 percent.”

Pilson said he hopes to have the team’s first practice tomorrow, but the team still needs to walk through with engineers and put the final touches on the field.

The schedule for the spring season is not finalized, but the first game of the fall lacrosse season starts Oct. 2 in Pittsburgh.