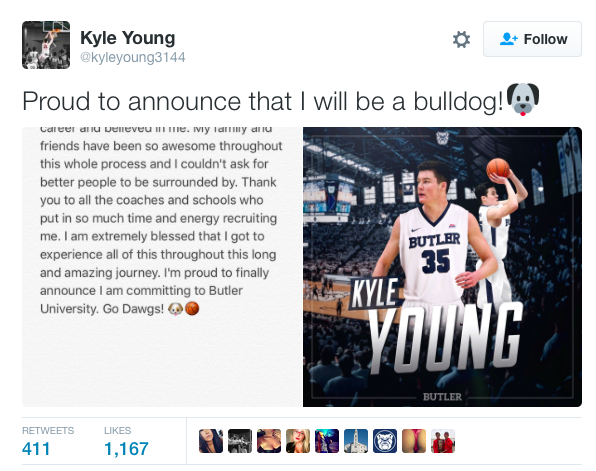 A recent NCAA social media rule allows coaches and their staff to like and retweet recruits.

Prior to Aug. 1, it was a violation. The NCAA had seen this act as promoting a school’s recruitment of an athlete.

The NCAA made this change because “under the current legislation, it is difficult to monitor all coaches and their social media activities. This proposal would create exceptions to the restrictions related to endorsement activities and publicity related to recruiting on social media,” the NCAA reported.

Coaches and universities were always able to view and message recruits through social media platforms. Before the change, they could not directly endorse posts from recruits.

At the same time, Pedon said social media is only a small part of recruitment. Most of the recruiting process stays the same despite the policy change.

“Our main focus is building relationships from ground zero with recruits, their families, their coaches and all of the people around them,” Pedon said.

Jared Grubbs operates butlerhoops.com, a site dedicated to Butler men’s basketball. The site includes a forum and information on future recruiting classes. Grubbs said it is unclear how the rule change influences recruits.

“I really don’t know how much of an impact it’s going to have,” Grubbs said. “I don’t expect it to be a game changer or anything.”

Not only coaches use social media to attract potential student athletes. Most interaction comes from fans independent of the school. With social media, fans see coaches and recruits interact. Now, fans are closer than ever to their favorite teams.

Grubbs said depending on the situation of the school, the activity of a fan base online can play a role in recruitment.

“I could definitely see where as a recruit, you could think that Butler’s fan base wants you more than a school that doesn’t have an active message board,” Grubbs said.

While social media is used by almost all recruits, Pedon said it will not be a point of emphasis.

“I don’t think that our staff is going to get hung up on feeling like they have to like or retweet everything written about a kid,” Pedon said.

On Sept. 9, the NCAA basketball recruiting period began. Currently, coaches nationwide are making visits to recruits. This period lasts until the beginning of the 2016-17 season.

Butler has three verbal commitments from the  high school class of 2017. These commits include four-star forward Kyle Young, two-star guard Jerald Butler and two-star guard Cooper Neese. There are two scholarships left for this class with nine open offers being eyed by recruits.

The use of social media in recruiting does not only affect major programs like basketball and football. Almost all programs have a Twitter account through their school’s athletic department, such as Butler’s new women’s lacrosse team. The team retweeted this response from a recent commit.

Chris Holtmann, Butler men’s basketball head coach, tweets the same picture every time the team picks up a new commit. Though it does not mention anything specific, fans can easily understand the message. Kyle Young committed to Butler earlier that day.

With the rule exception less than two months old, coaches are still testing this new tactic. Pedon said each situation is different, and getting likes or retweets means more to some recruits than to others.

Fans, coaches and players will not know if this change revolutionizes the way college programs recruit potential student-athletes.