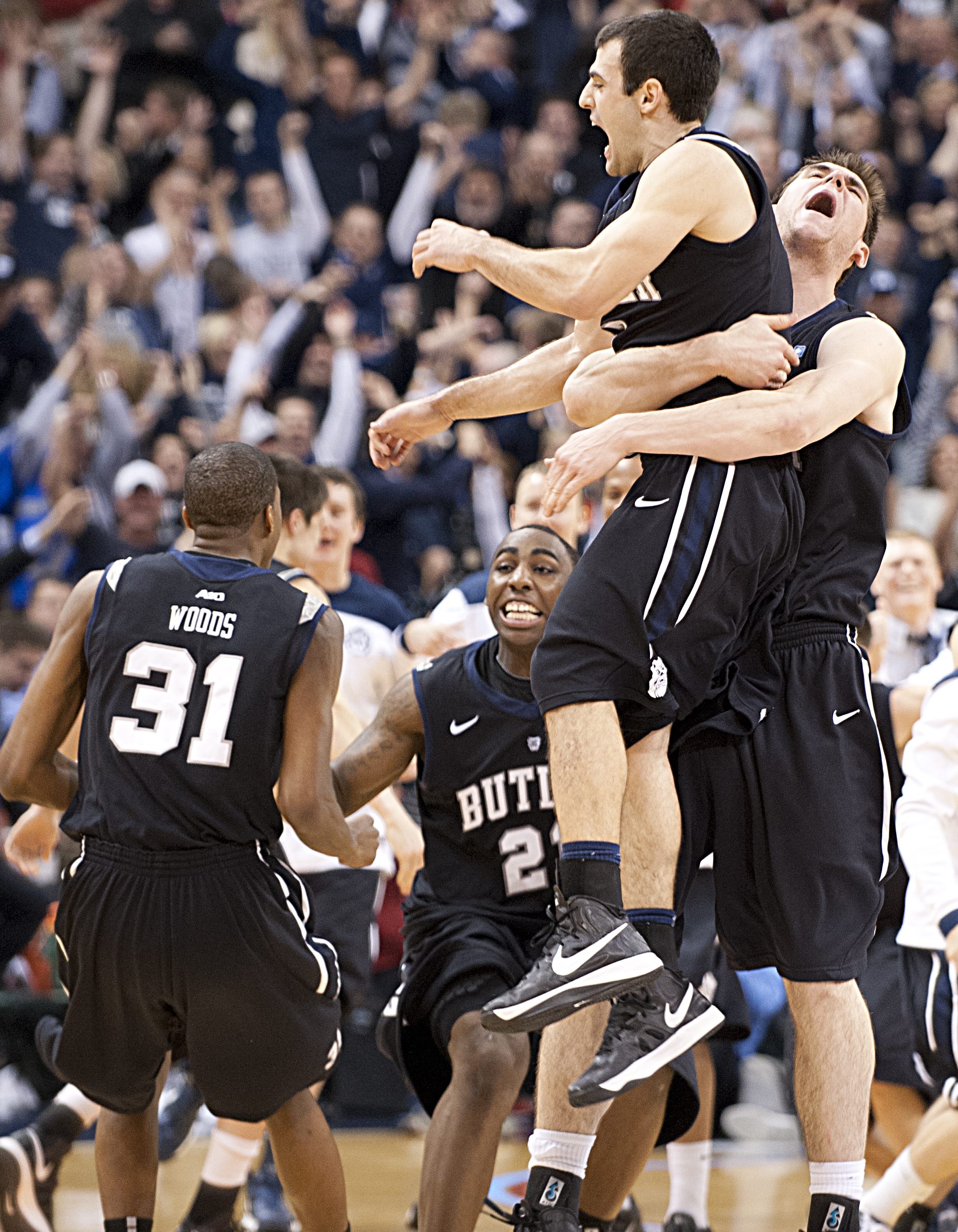 Andrew Smith lifts Alex Barlow in the air after Barlow scored the winning basket to defeat No. 1 Indiana University in the 2013 Crossroads Classic. Photo courtesy indysportslegends.com.

From March until October, Hinkle Fieldhouse sits quiet, calm and patient for Indiana’s sport to return to the hardwood of the basketball cathedral that it is.

The Final Four banners glimmer in the sunlight peeking through the windows on each end of the Fieldhouse. The bulldog logo in the center of the court has an almost intimidating feel when you step on it. You can feel the history the minute you step into the 88-year-old arena.

But one thing is missing. A thing that has not been brought up in the history of Butler basketball. But as we stand as a university in 2016, it just may be the most important thing Butler University has ever had the opportunity to do.

Butler has suffered tragedy after tragedy since opening night of the 2015-2016 season at Hinkle Fieldhouse. Two Butler legends, Andrew Smith and Joel Cornette, have lost their lives. Two players that have helped shape Butler basketball to what it is today are gone.

They were not just players; they were true Butler Bulldogs who represented the Butler Way everyday they had the blessing to step foot on our campus. For that, they deserve the highest honor.

President James Danko, Director of Athletics Barry Collier and the university should retire both Andrew Smith’s No. 44 and Joel Cornette’s No. 33 this upcoming basketball season.

The men’s basketball program at Butler has never in their history retired a number. It would be something new for everyone. But for Butler, there has never been a more deserving and opportune time.

Some Butler fans and faithful may be apprehensive to a number retirement. I know, Butler basketball has been around a hell of a lot longer than me. I realize all of the amazing players that have put on a Butler uniform. The list goes on and on. Plump, Collier, Tucker, Graves, Hayward, Mack, Howard, Barlow, Dunham, Jones, Marshall and Nored are all names that could be up in the rafters next to the Final Four banners.

But for Smith and Cornette, their time is now.

Cornette, who suited up for 128 games for the blue and white, was best known for his heart and hustle. He was never one to give up, no matter how much fans or media counted out the Bulldogs in any game. An example of this was when he finished a last second buzzer beating dunk to beat Indiana University in 2001.

Cornette never backed down, like a true Bulldog does not do. Cornette deserves to have his number lifted into history.

Butler hosted a vigil for Cornette at Hinkle Fieldhouse about a week after he passed away. Many of his coaches, teammates and peers attended. The event was open to anyone at Hinkle. Perhaps the most notable in attendance was former Butler head coach Brad Stevens.

JC had a passion, fire, and love of team that you felt every day. He made us all Believe. We love you and miss you already #33.

Smith died on January 12, 2016. His death left the University in shock, depression and angst. Nicknamed “Moose,” Smith was one of the most beloved Bulldogs to step on the Hinkle Fieldhouse floor.

He also had one of the greatest careers in Butler basketball history. He was in the starting lineup from his sophomore to senior seasons and came off the bench as a freshman. But his freshman year is what put the big man on the map.

Smith’s big moment came in the 2010 NCAA Tournament against Kansas State on March 27, 2010. Moose played 12 minutes, finished with three points and added a couple rebounds. These stats were the beginning of a magical career for Smith. After the 2010 Tournament, Smith played at least 35 games per year for the next three years.

He showed character, emotion and thoughtfulness for all aspects of the university. I never got to meet him, but as I fell in love with Butler as a 16-year-old kid, Moose was one of the players I immediately noticed in the games I watched. He was physical and tough, but could always step behind the three-point line to drain a triple, which I loved from a guy that was almost seven-feet-tall.

One image that will forever be in my head of Smith is him grabbing Alex Barlow by the waist and lifting him up with the biggest smile on his face after Barlow sank a buzzer-beating floater to beat Indiana in 2013.

Smith was not only a great teammate on the court, but also off. During the 2013 season, former Butler center Erik Fromm lost his father. Fromm took some time off from the team. He returned in Butler’s Atlantic-10 Conference game against St. Bonaventure.

This was the first Butler basketball game I had ever attended in person.

Fromm not only was given a standing ovation from the sold out Hinkle crowd, but also his teammates. The roaring of nearly 10,000 Butler fans was a sight to see and hear.

After the game, I listened to the post-game radio show. I listened as Brandon Gaudin interviewed Smith in the locker room.

And I still remember to this day what Smith talked about.

Prior to saying anything about the game, Smith mentioned his friend Fromm and what he was going through. Moose had his back every day that they were friends. Then, Fromm returned the favor. After Smith died, Fromm and Smith’s wife Samantha gave an address to a packed Hinkle Fieldhouse thanking them for their support. Everything had come full circle, and everyone loved Moose.

While Andrew was in the hospital, one of the greatest things I could wake up to every morning was a tweet by his wife Samantha updating his progress with a picture. Many times she would tweet a picture of Andrew on an exercise bike with a mask and a gown on showing him in his fight.

Everyone at Butler knew how hard he tried to stay on this earth.

One of the last things Andrew ever saw in his life was a Butler basketball game. Samantha and Andrew made it to Bankers Life Fieldhouse to watch Butler take on Purdue in the Crossroads Classic.

As Cornette and Smith had experienced hundreds of times in their career, Butler had already been counted out by the odds and numbers. They said the Purdue front line of two seven-footers was too much for Butler to match. Well, like usual, Butler proved them wrong.

With Andrew and Samantha on hand watching closely, Dunham and company beat the Boilermakers 74-68 to pick up their ninth win of the year.

Stevens once again took to Twitter to describe Smith after he died.

To the toughest guy I ever met – Thank you, Andrew. We love you and will always be inspired by you.

Some may argue that both players have already had their memorials in Hinkle. But one is not enough. Not for these players. This can be one of the most special things the university has ever done.

The thought of being inside of Hinkle for the banner raising gives me chills. The flashes of cameras would be endless, the cheers would be as loud as ever and our heroes would be remembered forever.

The stats alone make Smith and Cornette two of the greatest to ever wear a Butler uniform. But when you’re talking retiring a number in the Butler basketball program, it takes a lot more than a good four years to have that happen.

But it is time.

These two men gave everything they had for Butler University. As a senior, I am looking at my final year of college. Things have changed every year that I have been here.

JC and Moose will never be able to step inside Hinkle Fieldhouse again. So let’s make them forever a part of it.

As an alumni, I want to step foot inside an empty Hinkle Fieldhouse every time I come back to campus, sit in my regular seat in the Dawg Pound, look up and see the numbers 33 and 44 standing alongside one another right next to the Final Four banners.

As the sun peeks through the windows of Hinkle on a beautiful day on campus, the numbers on the banners will glisten and will serve forever as an ever present reminder of everything Joel Cornette and Andrew Smith have done for Butler University.