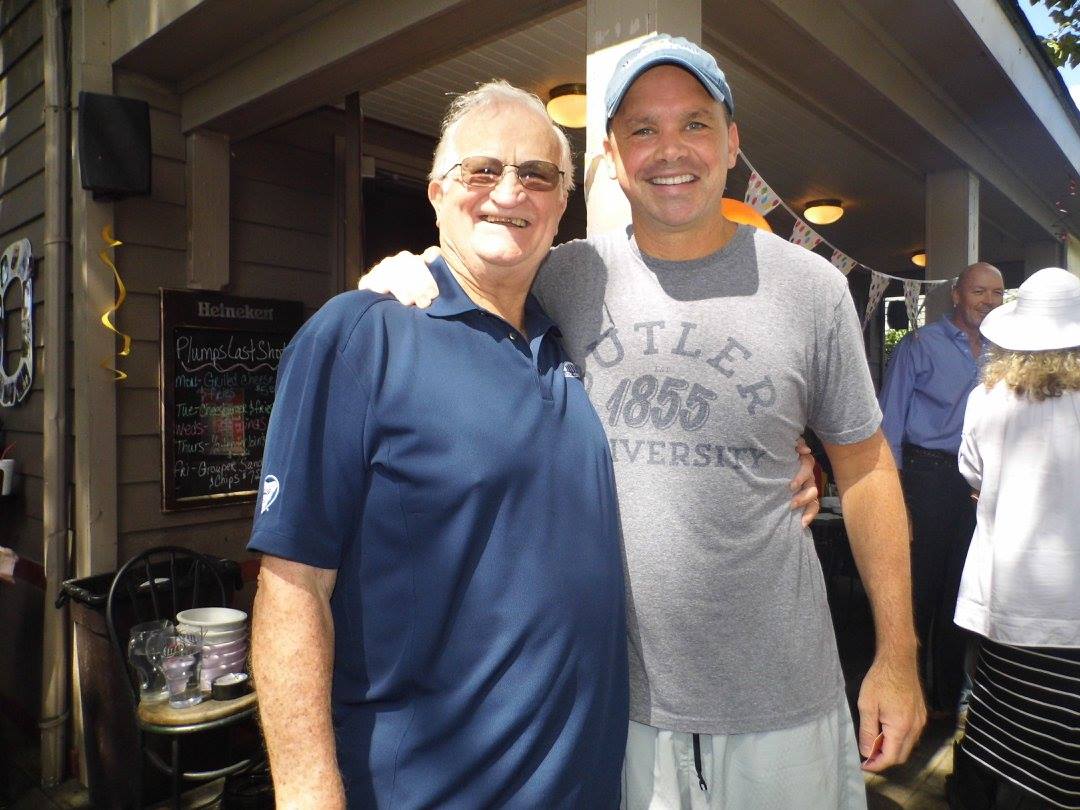 Bobby Plump became part of Hinkle Fieldhouse history the moment his All-Star Converse suspended mid-air, and the ball spun off his fingertips and arched over the defender’s outstretched hands into the net, just as the buzzer echoed around Hinkle’s ceilings.

Plump’s game winning shot lived on in everyone’s minds, but there was no photographic proof until last week.

His game-winning shot made his team, the Milan Indians, the 1954 Indiana High School State champions. The same team that inspired the movie “Hoosiers.”

“Everytime I walk in the Fieldhouse, I kind of get goosebumps,” Plump said. “There’s ghosts running around in there.”

A year later, Plump would play in the same fieldhouse as a Butler Bulldog, coached by Paul “Tony” Hinkle.

As the new champions made their way back to Milan, an 18-mile-long caravan trailed behind their bus.

Almost 40,000 people came through Milan that day to greet them, according to state police.

There were cars parked around the town for seven miles because they could not all fit in the small town of 1,100 people.

“We were a bunch of naïve kids,” Plump said. “We thought that was a normal thing when you won the state tournament.”

At a reunion, 20 years later, former teammate Bob Engels asked, “You think they’ll be talking about this next year?”

The Milan Museum is dedicated to the 1954 team and the movie “Hoosiers,” which is based off the Milan story and filmed in Hinkle. There is a tournament bracket — from floor to ceiling — of Indiana’s 750 teams in 1954, with Milan winning it all.

Tom Kohlmeier and his wife, Shelly Kohlmeier, are Milan Museum benefactors. He was three when the “Mighty Men” of Milan won. Now, he is a close friend to many of the players, including Plump.

Kohlmeier said he watched the filmed championship game every year in high school gym class. Still, he said it was hard to appreciate what the basketball team did. It was not until they graduated and realized people all over the country knew the Milan story.

“Without really a lot of advertising, our little museum down there in Milan has had visitors from all 50 states and 34 countries,” he said.

Kohlmeier said the team never let the fame get to their heads, something he attributes to small town values.

“You’re taught to be humble,” Kohlmeier said. “It’s hard-working people that are taught to be friendly to their neighbors, to help out their neighbors, to help out their family. And the town kind of watches over you. You can’t really get yourself in trouble because your mom and dad are going to know about it before you get home.”

Kohlmeier sawa multiple kids approach Plump for an autograph at “Plump’s Last Shot,” a restaurant in Broad Ripple dedicated to him.

“The story — 62 years later — still resonates with a lot of people,” Kohlmeier said. “And it’s not just older people, it’s younger people too.”

In the past two months, Plump received three letters from kids asking for an autograph. Those letters were from France.

Plump never received a picture of his game-winning shot — his Converse leaving Hinkle’s court, the ball poised at his fingertips — until now.

The artist, Anthony Padgett, wanted to paint something beyond his usual landscapes and animals. His business partner, a Butler alumnus, suggested the university as a subject. Padgett approached Honaker, who is a Butler senior development officer, in February, but Honaker did not have any projects for him at the time.

“It was just kind of two things coming together at once,” Honaker said. “One: can we do something special [for Plump’s birthday], and two: remembering the conversation I had with Anthony about artwork.”

For Honaker and Padgett, the details, including Milan’s uniform color, Plump’s socks and Hinkle’s arched ceiling, had to be historically accurate.

Padgett poured over grainy films of the championship game, studied Plump’s jump shot in multiple black and white photos, and even staged the moment in Hinkle. While painting, he played the movie “Hoosiers” to stay in the right state of mind.

While Padgett painted, Honaker raised $5,000 to fund the project.

Kohlmeier, the lead donor along with his wife, said he was more than happy to help Honaker with the painting. He said Plump is like a big brother to him.

Greg Siler, a donor for the project, said his father taught Plump history at Butler.

“I donated to the painting because of his character,” Silver said. “And because of my father’s esteem for him and mine as well.”

The painting was kept a secret until the revealing at Plump’s birthday party.

“My reaction was surprise to begin with and then awe at what an artist can do in rendering what is a magnificent reproduction of what actually happened,” Plump said. “I normally am not too lost for words, but I almost was at that point.”

But a smile was enough.

“He had a great smile on his face,” Silver said. “Sometimes, you don’t have to say the words, you just have a smile on your face. That says it all to me.”

“As my father would say, ‘for history,’” Silver said. “For the things that happened that we want to immortalize, not only in our minds but visually. That shot in the air was a shot that has been recognized as one of the greatest basketball shots in all of basketball.”

“I think there was around 500 people that came that day,” Honaker said. “That is a credit to who he is, somebody who’s made friends with so many people and just an affable, really likeable guy.”

The painting was not the first surprise Honaker gave Plump.

In 2014, Hinkle’s southwest concourse ramp was dedicated to Plump. Honaker raised $50,000 for this project. Kohlmeier and his wife were, again, the lead donors.

Honaker said he has to think of something for Plump’s 90th birthday now.

“It’s always important for me that they’re appropriately recognized in the here and now,” Honaker said. “I think sometimes we wait too long and those people aren’t with us.”

Along with the southwest concourse ramp, Hinkle has gone through many renovations — upgrading the locker rooms and workout room, installing a video room, putting four scoreboards in each corner — but the history is preserved.

“There’s not enough of those buildings left,” Padgett said. “Things that the walls in that place have seen are just phenomenal.”

Hinkle’s history extends beyond sports. Multiple presidents have spoken there, including Dwight Eisenhower, George H.W. Bush and Bill Clinton, among others. It housed the U.S. Army Air Forces and the U.S. Navy during WWII.

“[Hinkle] should mean something to the city of Indianapolis and the state of Indiana and farther because of how many people it’s impacted,” Honaker said.

Until Plump was 70 years old, he played basketball Thursday nights. The guys he played with asked him if he could get them to play at Hinkle.

“We spent an hour out there,” Plump said. “The guys came out, and they measured the goal, they measured the free throw line, just like the movie, and they still talked about being able to play on Hinkle Fieldhouse floor. That’s how much it means to people.”

Silver’s always had a personal connection to Hinkle. When Hinkle was first built in 1928, his cousin was one of the first financiers.

“I guess it’s somehow in my genes,” Silver said. “Must be a genetic thing. I do feel at home at Hinkle.”

When Silver was in grade school, Tony Hinkle,  the Fieldhouse’s namesake, allowed him to sit on the opposing team’s bench and provide water and towels.

“It was a memorable event,” Silver said. “Knowing Tony Hinkle as I did, as a person I looked up to, as players did as well, that’s one thing I will never forget. He was a true gentleman.”

“I thought the world of him,” Plump said.

The name Tony Hinkle was recognized off campus as well. Plump once met John Wooden, who is recognized as one of the most revered coaches in sports history. He won seven NCAA championships in a row, winning 10 total.

Two exhibits in the fieldhouse feature Tony Hinkle and the Milan basketball team, including a copy of a recruitment letter from Tony Hinkle to Plump.

The handwritten letter first congratulated Plump and his team on winning the state tournament. Then Tony Hinkle wrote, “Now make up your mind to come to Butler University.” After Tony Hinkle’s signature, he wrote, “P.S. If any of the other guys want to come, bring them along.”

Years later, when junior basketball player Kelan Martin was recruited to play for Butler, he said the coaches talked about the history of Hinkle and showed him old videos.

Sophomore basketball player Nate Fowler said Hinkle was one of the main reasons he came to Butler.

“There’s not a day I don’t go over there,” Fowler said. “It’s a sanctuary if anything.”

Hinkle’s court is the original wood from 1928.

“It was the best floor that I’ve ever played on,” Plump said. “When you bounce the ball on the floor, you could feel the vibrations in your shoes.”

Nothing has changed over the years.

“When you get on the court, the court feels bouncy, and your movement’s more fluid,” Martin said. “It’s just different out there. You can jump higher. That’s how I feel on the floor.”

Hinkle holds a history and carries a tradition.

“I think it’s a tradition that will continue on indefinitely,” Silver said. “It’s a tradition of fine athletics and academics that going hand in hand. These players are extremely smart and extremely talented.”

Martin calls it a legacy.

Martin said he sees Hinkle’s impact on all former players, how it carries to the team now, and how he personally wants to pass that impact along to newcomers that play at Hinkle.

“I hope all of the students, even if you’re not a die-hard basketball fan, appreciate [Hinkle’s] history when you’re here,” Honaker said. “Just not taking it for granted because so few campuses in this country have a Hinkle Fieldhouse. It’s created so many great memories for Butler people, and again, people who are not Butler alumni. It’s such a treasure here at Butler.”