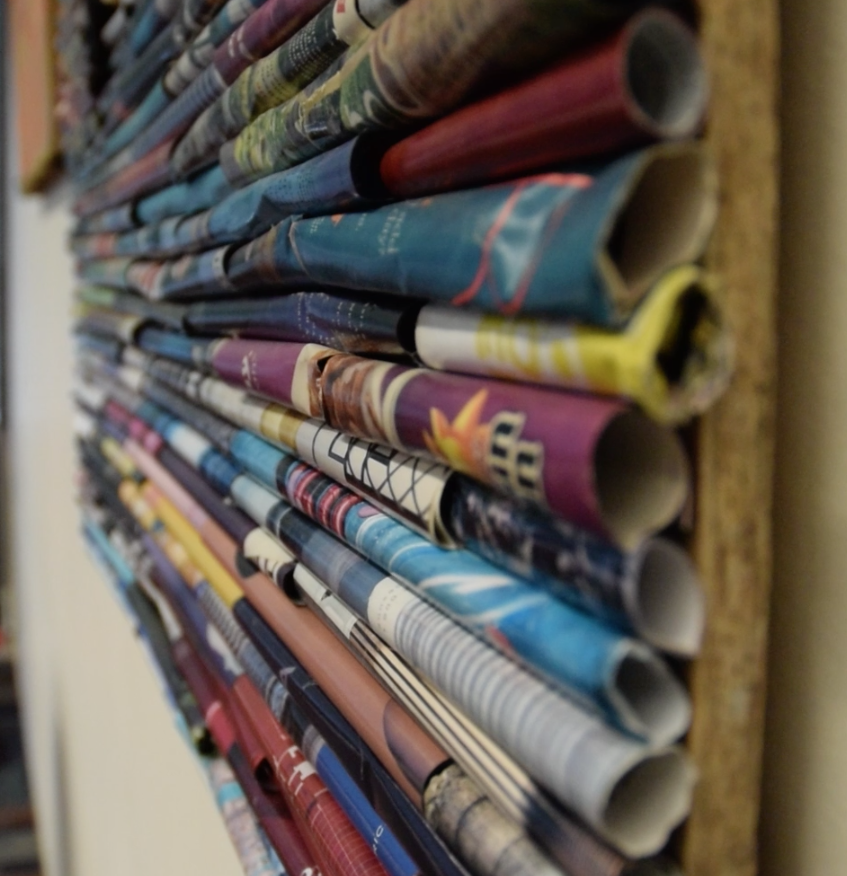 Rolled up magazines, a worn hollow core door,  ancient ladders and giant word blocks line the walls of the first and second floors of Irwin Library.

“Well, it started as just sort of a scavenger hunt notion of, ‘What’s out there that people can throw away that can have another purpose?’” Lad said. “The assignment was to find some materials that are thrown away or that could be repurposed—even in the dumpster—bring them in and as a team create an image using the raw materials.”

For the last decade, Lad worked out of his own studio located downtown Indianapolis. But he said he likes to bring art-based experiences into the classroom.

“We’ll see a little bit of art this semester,” he said. “It always kind of changes as we go.”

The course evolved over the past five years. This year, the graduate course will not complete this project, but the strategy class will pull together data about recycling, such as what materials are most often recycled and how they are used.

“Sustainability is a critical topic,” Lad said. “You can’t do strategy as an energy company, as an auto manufacturer, or a technology company without asking the question, ‘Is the way we’re approaching this sustainable?’ So, the recycling exercise gets [students] to kind of pay attention to what we throw out and what we repurpose.”

Students visiting Irwin, like junior Chelsea Yedinak, notice and interact with the pieces as well.

“I thought it was just a really cool idea to kind of bring some art into the library,” Yedinak said. “It’s a space a lot of students use. It can kind of draw attention to both art and recycling.”

Students spell, “MBA” in the middle of a recycled magazine piece. – Photos by Alexis Price

Lad said interaction is an important part of the exhibit, specifically pointing out the second floor.

“There’s a set of cigar boxes with letters,” he said. “Put up a statement about something you’re feeling or thinking or noticing, and take a selfie of it.”

One of his favorite pieces is a vertical lettering sign that reads, “Recycle.”

“I think there’s another one on ‘Earth,’” he said. “It’s just a set of stencils but it’s on an old, hollow core door; I find that one’s kind of fun. It’s true I think I tend to gravitate toward the letters and letters that just kind of create a message.”

Lad said he likes this break from the normal business mindset.

“What we find in business is that we’re all this logical, analytical, deductive,” he said. “There’s this kind of left brain bias, and you realize art kind of brings out the magic in all of us.”