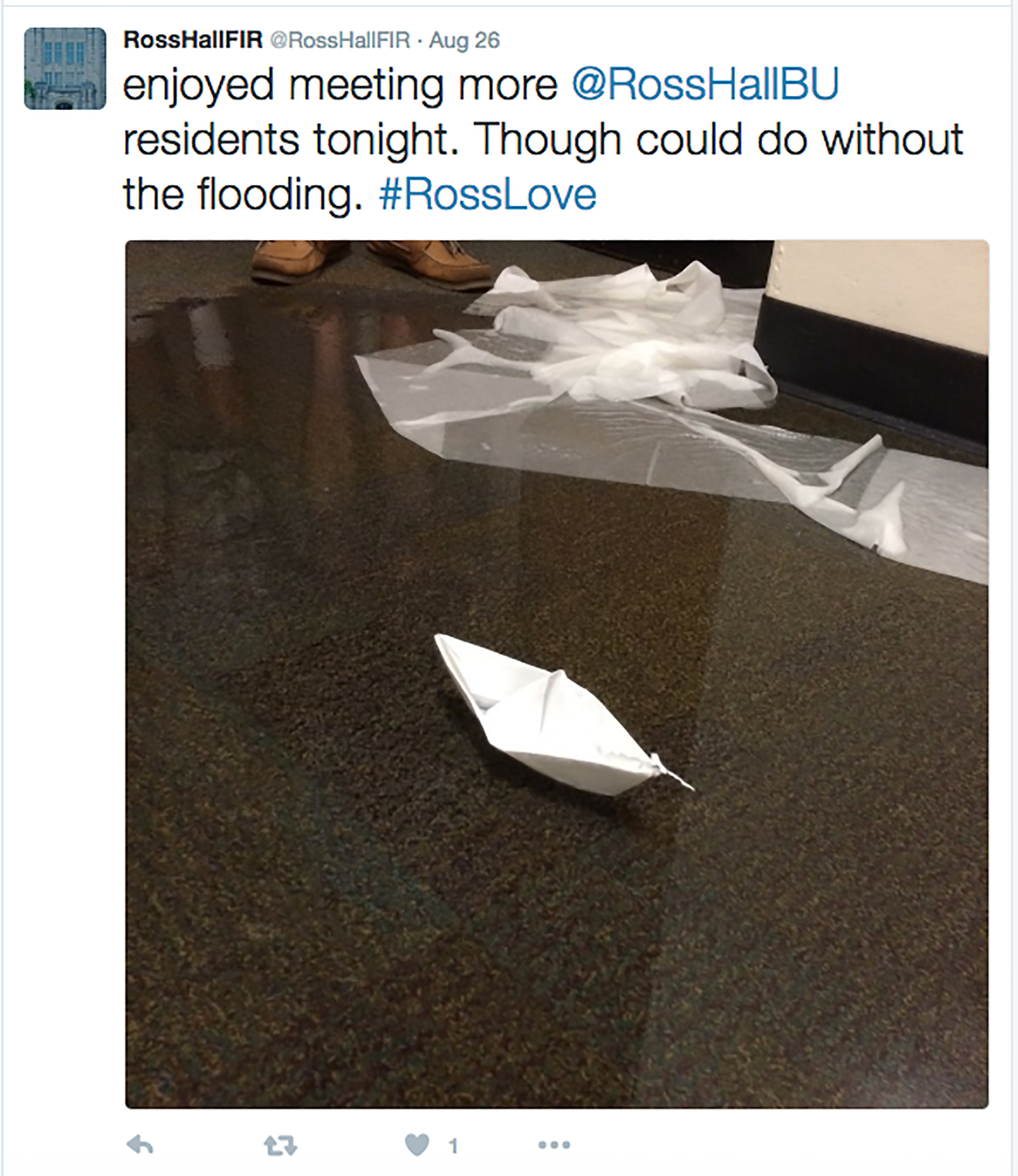 At the peak of the flooding, around 6:30 p.m., two of the four major hallways in the basement were completely covered in water, while each of the other two hallways were about half-covered.   Aiding in the high quantity of excess water was the fact that the city’s sewers were unable to hold all the rain, and subsequently were backed up.

First-year student Ivan Ross lives in the Ross Hall basement. He described the changing opinion of the students as it started raining harder and the situation became more serious.

“That is about when it switched from being less ‘ha-ha, water’s coming in’ to more ‘water is going to destroy the basement,’” Ross said.

According to a separate email from Coats, roughly 30 students were affected by the flood.

“Our current procedure would be that we will buy replacement items for those that were damaged and distribute them to you,” Coats said.

No students were permanently relocated, but the students who were still in the basement at the time of the flooding were encouraged to leave for the night. They were allowed back the next morning.

Nathan Lamore, an RA for Unit Two of Ross, one of the most affected areas, recalls trying to get everyone negatively affected by the flood out of their room.

“For all I know, probably about half of my unit left the building to stay in ResCo or Fairview with friends there,” Lamore said. “They told us that we didn’t have to leave, but they didn’t want us walking around barefoot. They didn’t want us using the bathroom, and a lot of us had BITS the next day, so we wanted to get a decent night of rest somewhere.”

In the week since the flood, actions were taken by Ross administration to repair damages caused by excess water. The carpet in every affected area in the basement has been removed and is being replaced. Ross administration is working with students who had things damaged in the flooding to replace those items.

This is not the first time Ross has faced flooding issues. Back in 2014, the Butler Collegian reported at least one room experiencing leakage after heavy rainfall. It also flooded this past summer, though no one was living in Ross at the time.

Despite all the negatives of the situation, some Ross students remain positive. Johnny McDonald, a first-year resident in unit two, tried to see the bright side.

“I mean, in hindsight, this isn’t the craziest thing,” he said. “If this is the worst thing that happens to us in our time here, we’re going to be alright. I guess this flood, it gave us all something in common, all these new freshman coming through. We’re all flood survivors now.”