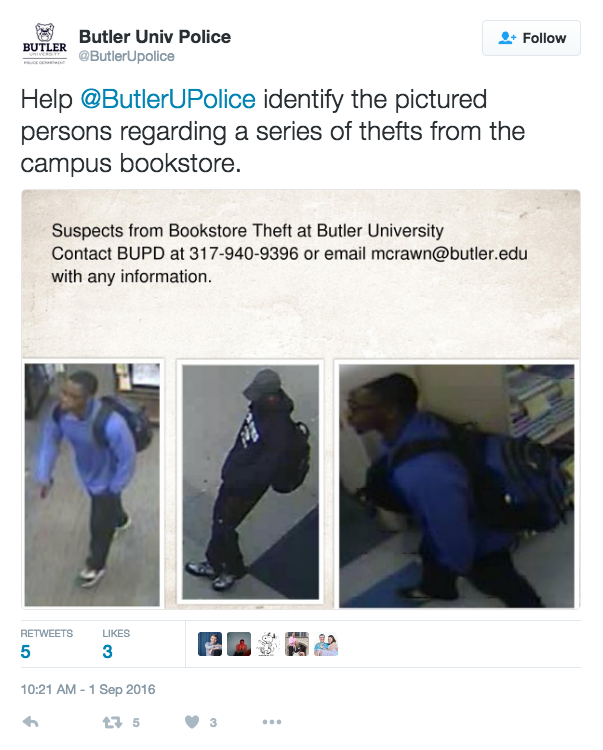 The thieves entered the store between 3:15 and 3:35 p.m. on Aug. 30. While they appeared to be looking up the value of the books on their phones, they eventually stole several business textbooks. One of the bookstore’s employees believe they visited the store several times over the past two weeks.

According to the police report, both men wore casual clothes. A 6-foot man in his early 20s had a dark complexion and short hair. The other thief appeared to be in his 30s with a light complexion and a few inches shorter.

The official Butler University Police Department Twitter account released pictures of the men shortly after the theft. Lead detective Mark Crawn said the police still do not have any other information on the thieves.

“Right now, we don’t have any reason to believe that they have any affiliation with campus, but we can’t rule that out,” Crawn said.

He also said posting photos to the Twitter account worked in the past when trying to apprehend the suspect of a hit-and-run on campus.

If thieves are identified and caught, they will face felony charges due to the high dollar value of the theft.

When asked for a statement, the Butler University Bookstore said that they cannot make any comments while there is an ongoing investigation.

*Correction: The headline previously misidentified the crime. The incident was larceny and no force was used.

The Butler Collegian regrets this error and any harm it has caused.