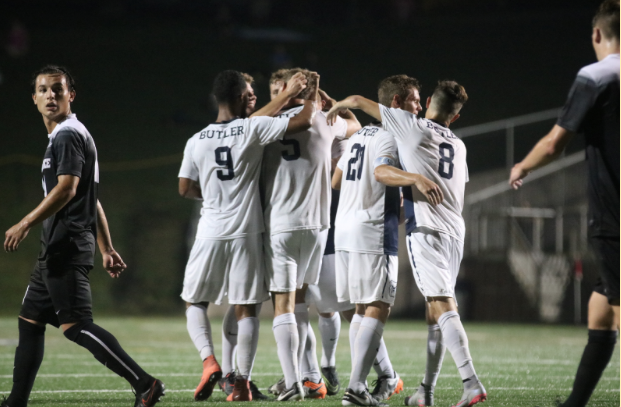 The Bulldogs celebrate the 71′ penalty kick goal by Jared Timmer, his first as a Butler Bulldog. Photo by Jimmy Lafakis.

After climbing the NCAA rankings to No. 10 in the nation, the Butler men’s soccer team continued their dominance over their competition Saturday night.

After a swift 3-1 victory over the University of Evansville Sept. 21, Butler (6-0-1) welcomed the Providence College Friars (4-3) to town for a Big East showdown.

Butler set the tone early against the Friars, controlling possession and pace of play for much of the first half. Senior David Goldsmith continued his trend of strong play by putting up two shots in the first 10 minutes.

Despite outshooting Providence 7-1 in the first half, the score was tied 0-0 at the break. The Bulldogs came out flat in the second half with Providence rallying for momentum and keeping the Bulldog forwards at bay for the beginning of the second half.

The Friars attack would settle down and allow the Bulldogs to create chances late in the game.

In the 77th minute, freshman Lewis Suddick put a shot on goal that was first saved by Providence goalkeeper Ben Seguljic. Seguljic lost the handle of the ball off the shot and made contact with Suddick going for the loose ball. Butler was awarded a penalty kick which was taken by sophomore Jared Timmer.

Timmer’s shot just snuck past the keeper giving the Bulldogs a 1-0 advantage in the 77th minute. The PK was Timmer’s first as a Bulldog.

In the 81’ minute, just 4 minutes after the first penalty, Suddick was once again fouled in the box and Butler was given another penalty kick. This time Suddick took the PK, and netted his sixth goal of the season. Butler would build their lead to 2-0, and it would stay that way until the final whistle blew.

Lewis Suddick forced both penalty kicks in Butler’s 2-0 win. For that, he is tonight’s Man of the Match pic.twitter.com/sNqXtcRtH9

No. 10 Butler is expected to move up in the NCAA polls after the fall of No. 6 UCLA and their 2 victories this week. Butler, now 7-0-1, 2-0 in the Big East, will travel to Bloomington Wednesday for a top-10 showdown with No. 4 Indiana University.

This yearly clash of in state rivals will have a different spin this season as both teams will be ranked in the top-10 nationally at the time of play.

Butler will walk into Bill Armstrong Stadium for a 7:30 p.m. game atop the Big East standing, holding their highest ranking in school history. The clash with IU has the potential to be the biggest game of the season for Butler, who will look to upset Indiana just as they did back in 2013 when they beat the then defending National Champions 3-2 in double overtime thanks to then freshman Goldsmith.