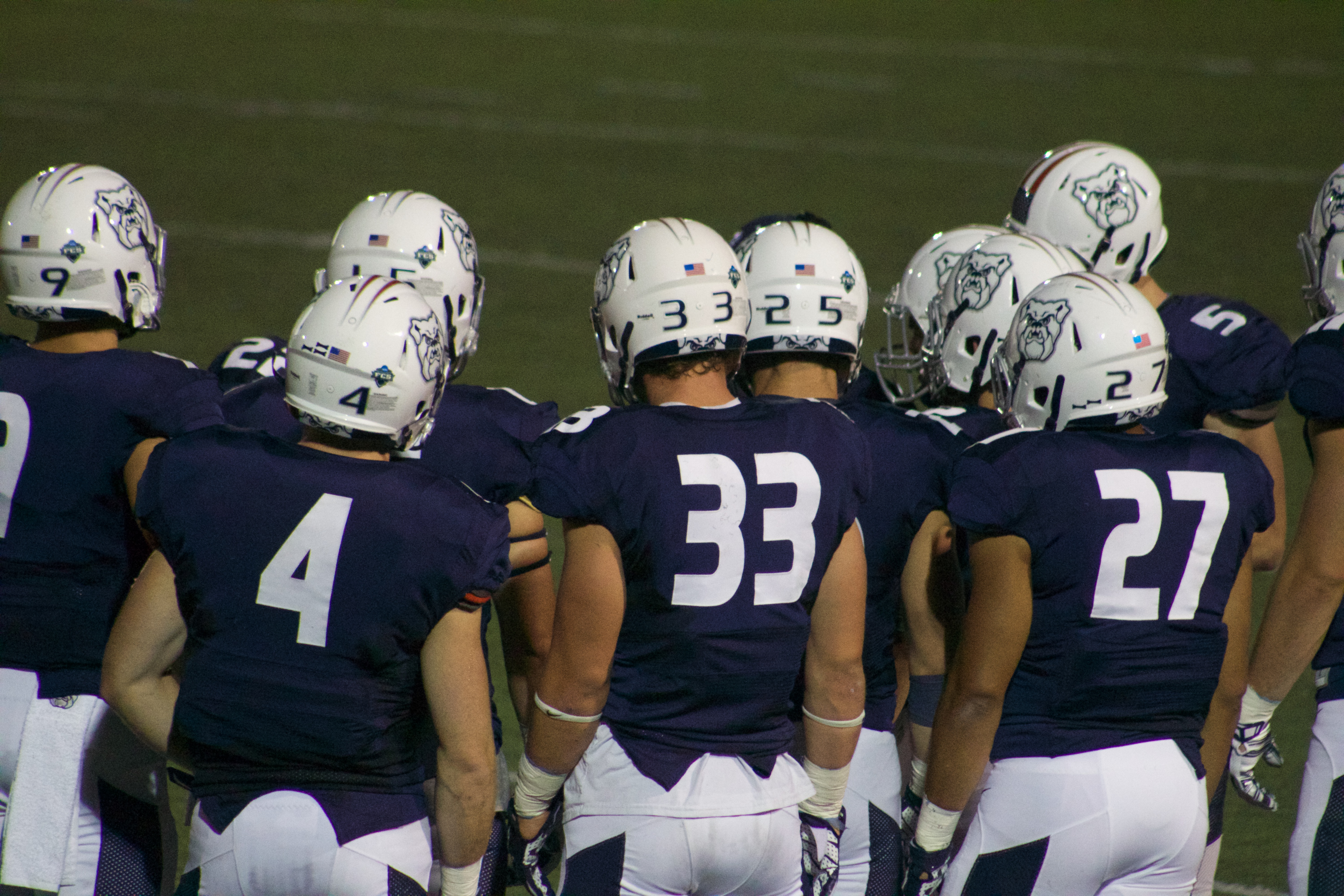 The Butler football team huddles to plan their next play. Photo by Jimmy Lafakis.

The Butler football team opened up the home season with a 59-14 rout of Franklin College Saturday at the Butler Bowl to improve their overall record to 1-1.

The Bulldogs used the arm of Malcolm Weaver, who threw for 260 yards and three touchdowns in the first half, to down the Grizzlies.

Butler started off the scoring with three unanswered touchdowns in the first quarter, two of which came via Pace Temple, who finished the game with 92 yards on five receptions and the two scores.

Head coach Jeff Voris said scoring early is something that is crucial as a home team.

“When you’re at home you have to come out and set the tone and be able to get an early score to take some of their momentum and enthusiasm away,” Voris said. That was the start we needed.”

Franklin responded by bringing the gap down to 28-14, but those would be the last points the Grizzlies would get. Butler would lead 42-14 going into halftime.

Franklin quarterback Chase Burton matched Weaver’s impressive day with a solid performance of his own. He completed 21 of 35 passes for 247 yards and two touchdowns.

Butler also dominated on the ground. Duvante Lane racked up 104 yards and three touchdowns on his 12 carries. Overall the Bulldogs rushed for 254 yards as a team, as opposed to just 55 for Franklin.

Weaver said he thought the offense played well across the board.

“All-around the offense did great today,” Weaver said. “I mean you got explosive receivers all over the board. No matter what package you want to put out there we got a lot of guys who can make plays. Whatever you want to do with the offense there’s just a lot of tools there.”

The difference came on defense for the Bulldogs. They were able to force four sacks and three interceptions.  Redshirt Junior Adam Chapelle reeled in two of the interceptions, including one in the fourth quarter he returned six yards for a touchdown.

Voris said he was proud of how the defense was able to control the game all night.

“The defense I thought really played well all night,” Voris said. “We did a great job controlling the line of scrimmage really both in the run and the pass, and we got them one-dimensional and were able to sneak away from them.”

Butler will head to Upland, Indiana. to take on Taylor University Sept. 17 with the kickoff coming at 7 p.m.

Voris said he expects Taylor to play a tough and physical game against the Bulldogs.

“Taylor has always played us well, and they’re big and physical so they’ll pose a lot of problems,” he said. “You have to keep raising the bar each week so we’re going to have to be even better next week.”