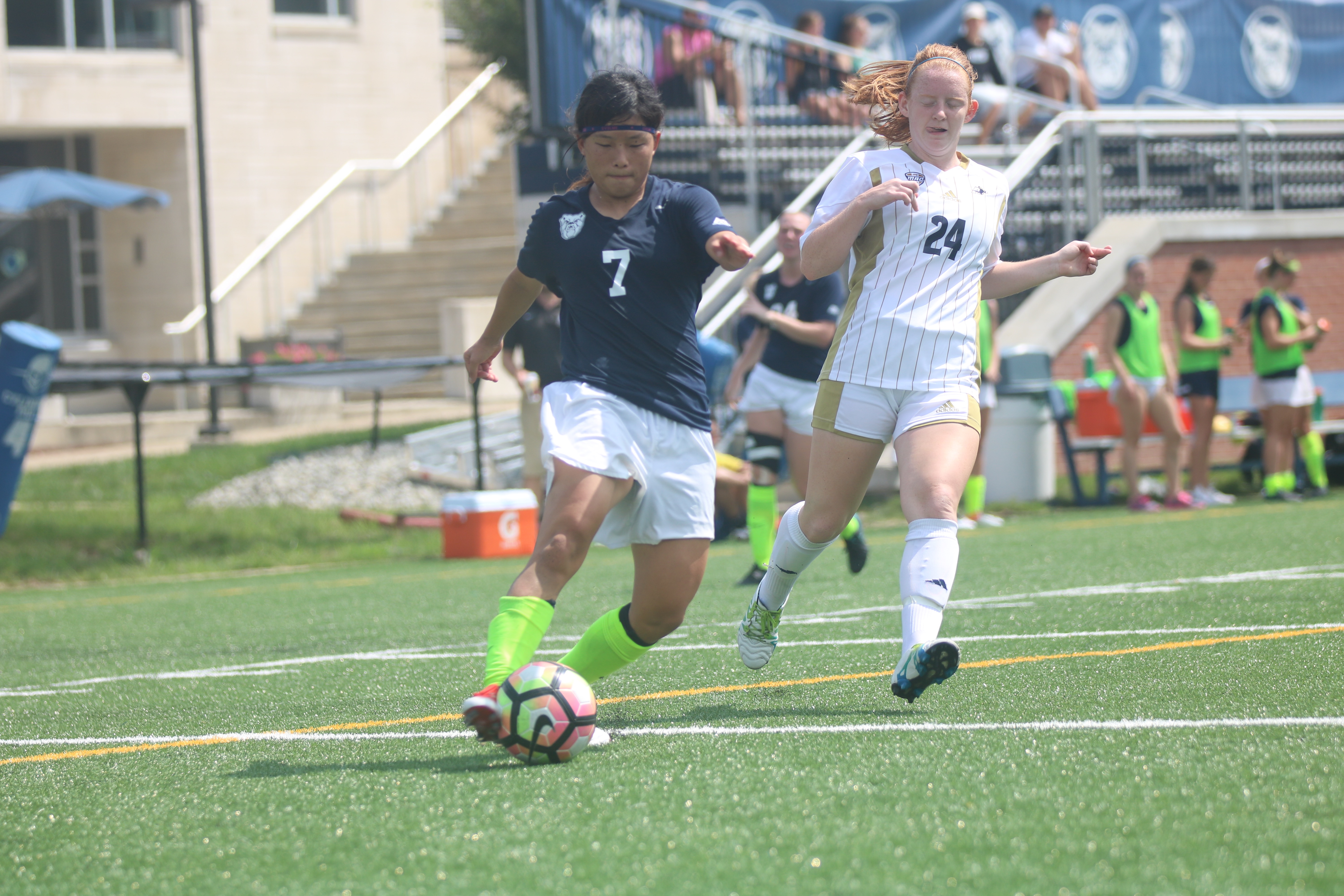 Senior Serina Kashimoto dribbles the ball away from the defender. Photo by Jimmy Lafakis.

After capping off the most successful season in school history with a record 16 wins and the Big East championship, the Butler University women’s soccer team is looking to keep that success going this season.

To date, the Bulldogs have played four games, and are 2-1-1 on the season, with their two wins coming against Ohio University and University of Akron.

Co-head coach Rob Alman said that while it hasn’t been a dream start to the season, the team hasn’t been able to play to its full potential just yet.

Senior midfielder Serina Kashimoto knows there will be a difference on the field this year without her standout teammates.

“It’s hard [losing Sophia Maccagnone and Randi DeLong], because they were really good,” Kashimoto said. “But it’s not going to give us any excuse. We’re not going to get treated any better than last year, so we try to adjust.”

Kashimoto knows she’s the new leader of the team, and while it is not something she is used to, she is doing her best to help her team.

“Personally, I’m kind of a quiet person, so I may not be a vocal leader, but I’m trying to speak up and be more like a leader this year,” she said. “I’m trying to do my best and be a leader, be a hard worker and show my teammates what you’re supposed to do.”

Sophomore forward Halle Stelbasky comes into this season off the cuff of a stellar freshman season where she led the team in goals scored with nine. She started this season slow, tearing her ACL in the final game of the regular season against Xavier. She returned to the field for the first time on Aug. 26 against Indiana University, where she played just 14 minutes.

Junior Madison Card comes into this season as the leading goalkeeper. Last season, she led the Bulldogs to nine shutouts, which was a school record for most shutouts in a season. She also sits fifth on Butler’s all-time shutout list.

Midgley also played in 23 games last season and scored two goals, including one in the Big East Championship game against Providence where she scored the only goal for Butler and secured the Big East title.

Looking towards this season, the Bulldogs ranked fourth in the Big East coaches preseason poll, and Kashimoto and Stelbasky were named to the All-Big East preseason team.

Kashimoto inherited the role as team leader this season after leading the team last year in assists and coming in third on the scoring list. Coming into this season, she was named to TopDrawerSoccer.com’s preseason Best XI teams third team, and she was named to the 2016 women’s MAC Herman Trophy watch list, which acknowledges the top 64 soccer players in the nation to determine the most outstanding player of the year.

“It’s an ongoing process,” he said. “You look at the year before and you graduate more starters out of that team that were four-year players and things like that. It’s something that you always got to do.”

Joining the returning stars this year will be a team that includes seven first years, some of which come with a lot of potential and experience.

The class includes Carly Goehring, who was a two-time all-state selection in Minnesota and a member of her high school’s 2014 State Championship team.

First-year Maeve Burger is from Munich, Germany. While there, Burger was a part of two championships in a co-ed league, was the team’s top scorer during one of the seasons, and was a part of runner-up team while in international play for Munich Football School.

“We have pretty good, strong freshman girls, but they’re still trying to fit into this team,” Kashimoto said. “But they’re getting better.”

So far this season, Kashimoto has led the way for the Bulldogs, scoring two of the team’s four goals in the regular season. Breann Pempek and Burger scored the other two goals for the Bulldogs.

Co-head coach Tari St. John knows that there will be a transition coming into this season, but the goal will be not letting her team hang their heads when things don’t go right.

“I think [the goal] is making sure we’re just not too hung up on the actual result of the game, [may it be] a loss and thinking that it’s a sign that we didn’t play well,” she said.

The team will try to keep their momentum going in the Hoosier Challenge Cup this weekend, spending Friday afternoon in Bloomington as they play Southern Methodist University, and returning to Butler to play Louisiana State University on Sunday afternoon.