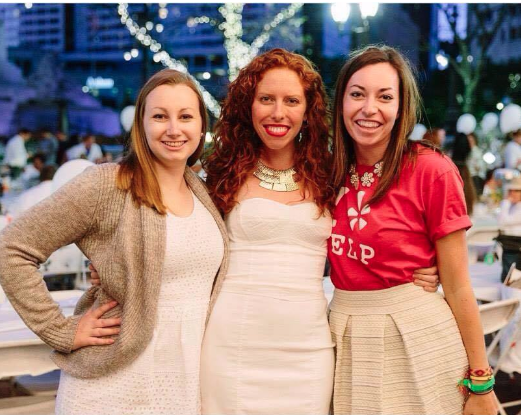 When most people think of Yelp, they think of a site for restaurant reviews. However, Yelp offers so much more.

The interns expressed the job at Yelp Indy never gets boring. Whether they are riding bikes in a parade or judging costume contests, there is always something new to do.

“You know the phrase, ‘Find a job you like and you’ll never work a day in your life?’” said Kingston. “That’s how I felt at Yelp.”

Some projects that the women worked on included writing a weekly newsletter, creating blog posts and planning events.

“What makes Yelp different from other review sites is that they create events in real life,” said Utken.

Yelp’s White Night takes place in Monument Circle with one thousand people of all nationalities dressed in white attire. People decorate their own tables, drink beverages from local businesses and listen to music provided by the Indianapolis Symphony Orchestra.

The Yelp Bazaar happens in December and showcases more than 100 local businesses. It provides entertainment, food and a way to get shopping done right before the holidays.

The event page highlights many free events around Butler to attend.

Yelp Indy also has a large presence on social media with which all three interns helped. This included posting things to sites like Facebook and Twitter as well as creating blog posts.

“Either I take photos in the moment when I’m at a local business,” said Robinson, “or when I’m on the app, I share photos people posted.”

Through the Yelp Indy internship, Utken, Kingston and Robinson were able to explore more of Indianapolis and share its benefits with others.