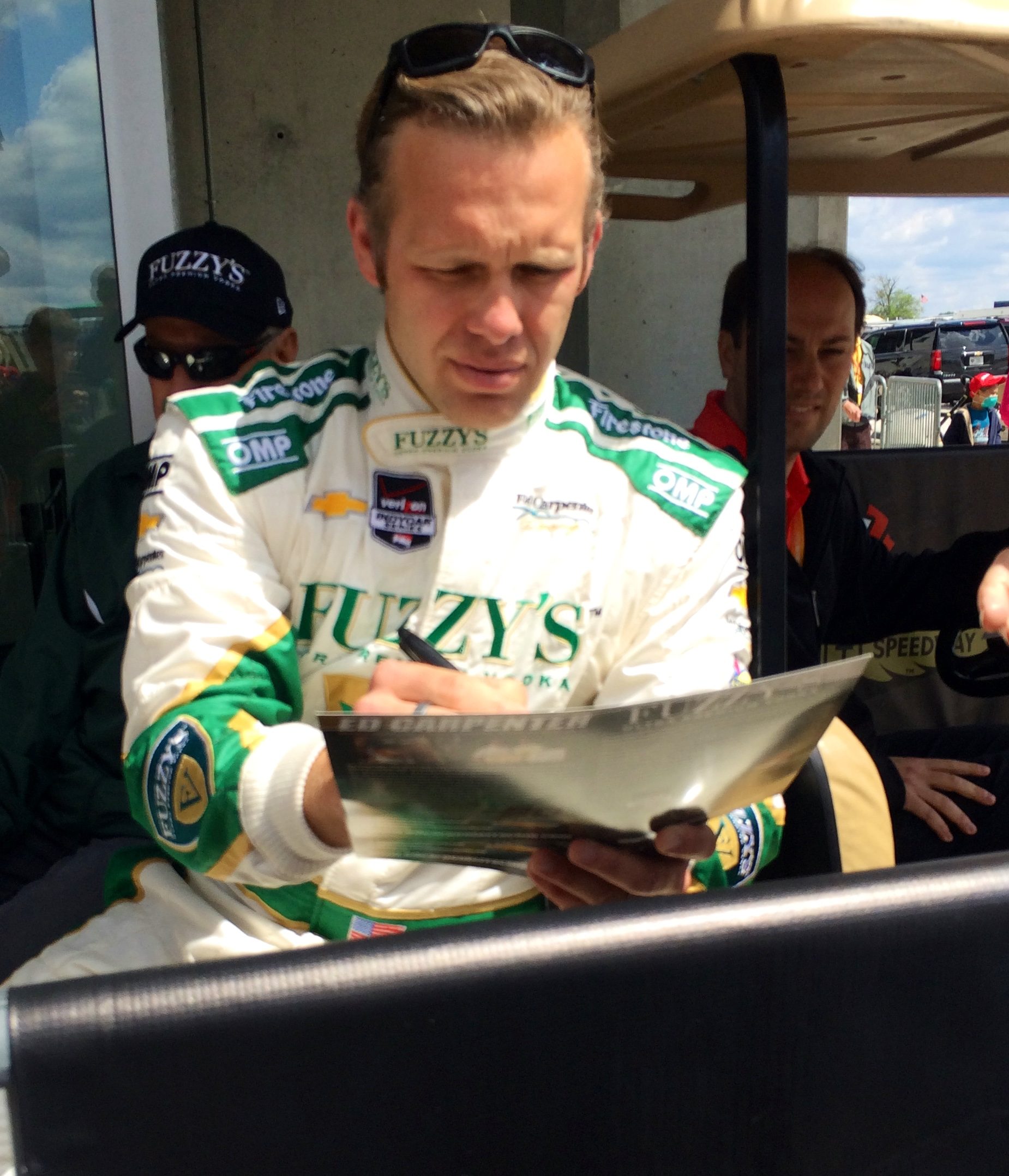 IndyCar Series driver Ed Carpenter may spend his life diving into turns at speeds over 200 mph, but it all started by spending four years at Butler University.

The Paris, Illinois, native graduated from Butler in 2003 with a degree in Marketing.

Most race car drivers don’t go to college. After high school, they set their sights on the big leagues of motorsports and devote all their time to that. Carpenter, on the other hand, was different. But it wasn’t solely up to him.

“It was a decision that was largely influenced by my parents, to be honest,” Carpenter said with a laugh. “Like a lot of young drivers, [racing] is all I wanted to do, and my parents were like, ‘You’re going to college.’”

Once it was decided that he was going to college, Carpenter had his sights set on four different schools: Indiana University, Indiana State University, Butler University and the University of Denver.

He narrowed it down to Butler and Denver. He chose Butler due in part to its location in Indianapolis, which is known for being the hub of open-wheel racing.

“Butler was just the best fit for me,” he said. “I didn’t really want to go anywhere big. It suited my personality, and the campus was great. It was 10-15 minutes from the race shop at the time, so it all just worked out and it made the most sense logistically for racing while I was in school.”

Carpenter had a successful career in midget and sprint cars in the mid 1990s while he was in high school. When he transitioned to college, things really started picking up for him.

Carpenter estimates he was running 70-80 races a year while going to college, which was no easy task as for a full-time student.

“It was a challenge, but I think it’s just what I did,” he said. “I had to make sure when I was there that I was getting my work done. During the spring and fall, I was traveling a lot racing, so I would be leaving a lot of times on Friday, and I wouldn’t get back until late Sunday night or Monday morning.”

Butler was understanding of the commitment. Dr. Richard Fetter, dean of the College of Business at the time, was a racing fan. He was involved with Carpenter’s studies, but said it never affected him at school.

“He understood there were sacrifices,” Fetter said. “He never complained to me.”

May of 2003 was a huge month for Carpenter. Shortly after he graduated college, he won his first ever open-wheel race. It wasn’t just any race either. It was the Freedom 100, the lower-tier Indy Lights Series race at the Indianapolis Motor Speedway, which is run the weekend of the Indianapolis 500.

“[Graduation] was big,” he said. “And that was a big time. Right after I graduated, I won the Freedom 100, and I ran my first IndyCar races that summer. From graduation and that period right after, it was really when I got all my opportunities.”

Over the years, Carpenter has added three wins in the IndyCar Series and two consecutive poles for the Indianapolis 500 to his resume.

In 2011, Carpenter made something of his degree from the College of Business and created his own race team, Ed Carpenter Racing. Carpenter may not have realized it at the time, but he feels now that his time at Butler helped prepare him for the business side of racing.

The time he spent at Butler also helped shape the atmosphere he has created around himself and his race team, both while he was racing for his step father at Vision Racing and now with his race team.

Michael Kaltenmark, director of external relations at Butler, has worked with Carpenter for more than 10 years and considers him a close friend. He has always felt a lot of respect and commitment when being around Carpenter both at Vision Racing and now Ed Carpenter Racing.

“He’s a Butler guy,” Kaltenmark said. “There’s some commonality there, some familiarity. We have that common ground. Across the board, with Butler people, we understand each other. I really consider myself lucky to have spent most of my career with his people.”

Fetter, who has stayed in touch with Carpenter through the years, agreed, adding that the Carpenter he knows is down to earth and gracious about his fame.

“When I think of Ed, I think of a gentleman: very competitive and very humble,” he said. “He’s such a fine person.”

Carpenter didn’t purposefully try to create the Butler environment around him. He tried to promote an atmosphere that was similar to him. It’s simply the person Butler made him out to be.

“You’re kind of shaped by where you’ve been, what you came from and who you’re around,” Carpenter said. “Culture is something that’s huge at Butler, whether it’s with the basketball team or with the general student population, the culture at Butler is so strong in the community, and that’s something that’s important to me.

“Whether it was at Vision Racing or here, the culture of the team and the feel of our team is one of the things that’s most important to me, and I think it has a direct effect on our performance on track by how our employees feel about our company and what it means to them and the culture that we have. I feel like that’s something that distinguishes us from other teams, and it’s something that I saw and continue to see at Butler.”

This is part two of a four-part series highlighting Butler University’s connection to the world of auto racing. Continue to visit thebutlercollegian.com for more features.