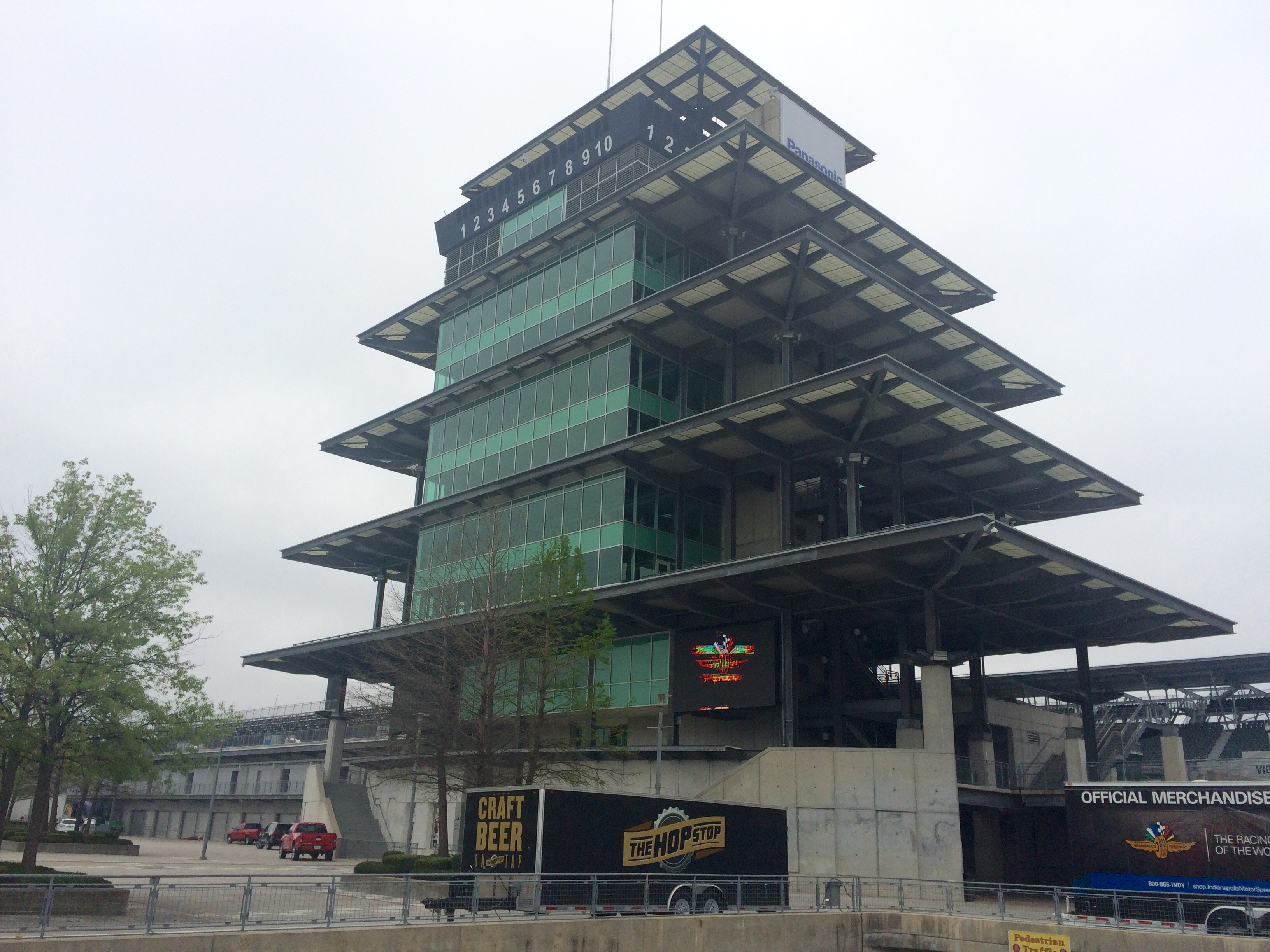 As a kid, Dave Calabro saw car after car race around the Indianapolis Motor Speedway and fell in love. He dreamed of one day being a part of that experience, and after going through Butler University, he quickly accomplished that dream and has been a public address announcer at the track for more than 30 years.

Calabro is an Indianapolis native and attended Ben Davis High School. While there, his passion for radio began. Once that passion was discovered, he began working on a radio program put on by the school.

“I was crazy about radio,” he said. “That was my thing. I was enamored with radio.”

Calabro was quickly able to combine his love for racing and his love for radio. During the month of May, he would spend all of his time at the track doing live reports for his high school’s radio program.

When at the track, the cars and drivers were all that was on his mind at a young age. But as the years went on and he got into high school, the cars weren’t the only thing he was paying attention to.

“I was always enamored by the Indy 500,” he said. “It gets in your blood. It’s a passion. I was the kid who would go out there and try to get autographs. And then I started listening to the announcing.

“I would go to the track, and I would just hear this big, booming voice [on the public address] that just commanded your attention. He dominated that track.”

That voice was coming from Tom Carnegie, who he knew of growing up in Indianapolis because he was a sportscaster at Channel 6.

It was then that he decided that radio was the route he wanted to take.

Calabro stayed in Indianapolis and attended Butler for their top-notch radio and television program, and it was the school his brother and mom attended.

“When I graduated, the best place to go for radio back then was Butler,” he explained. “I went and auditioned, and I got in. It was a great decision. [The program] was extremely hands on.”

The program wasn’t all that he liked. The size and community also drew him in.

“I liked the size of Butler,” he said. “I loved the fact that I knew my professors and they knew me. It helped shape who I was, who I became and who I am now.

“What I love about Butler people is they don’t brag, they’re not braggadocio,” he said. “I think there’s a humility that comes with “The Butler Way.” It’s not a bragging way. You just kind of do what you do, and then people go ‘Oh, wow.’ It’s the old ‘Actions speak louder than words.’”

Scott Bridge, now a professor at Butler, was a senior Calabro’s freshman year, and he certainly remembers the first time they met.

“It was during rush week,” Bridge said, who was a member of Delta Tau Delta. “He walks into my fraternity house, is wearing a big, floppy cowboy hat and had a huge smile on his face. Everybody was his friend. What you see on TV is exactly who Dave is.”

Calabro, a 1985 graduate and a member of Tau Kappa Epsilon, became one of many who went through Butler and made a name for themselves in the community and beyond.

His entry into auto racing came late in his time at Butler. He was in his senior year and landed an internship at Channel 6 news in Indianapolis, where long time public address announcer Carnegie, whose big, booming voice caught his attention as a kid, was a sportscaster and about to retire.

There was also another connection: Carnegie worked as an adjunct professor at Butler and was the creator of Butler’s radio station, at the time called WAJC.

Calabro recalls a day when the two of them went to the track for a test day. Carnegie was showing him around the track and took him up to the booth as he called testing. Suddenly, Carnegie handed Calabro the microphone and told him he was heading to lunch and to call the next hour of testing.

“I had the mic in my hand, and it was a Tuesday afternoon, and I’m sitting there watching my childhood heroes,” Calabro recalled. “‘Mario Andretti just drove by…There goes A.J. Foyt…Rick Mears is on the track right now.’ I was like, ‘Wow, this is really cool.’ I was kind of caught up in the moment, and I tried to do my best.”

Carnegie, however, wasn’t impressed with what he had heard while at lunch.

“He came back an hour later and said, ‘Boy that was horrible. You sucked. It was terrible,’” Calabro said. “I was like, ‘Wow. I guess I just blew my opportunity.’”

Or so he thought. A couple weeks later, Carnegie called Calabro and asked for some help at the track during practice and qualifying. Calabro quickly said yes without thinking about school.

“I realized I committed to a day where I had a final at Butler,” Calabro said. “I thought, ‘Oh, this is no big deal.’ I went to this math professor and told him I had a chance to work at the Indianapolis 500 for Tom Carnegie and asked if I could take the final later.”

Calabro talked to his professor, who bluntly told him he could not take the final another time.

“So I had to make a choice: go to the track and take advantage of this opportunity, which is my dream, or take the final,” he said. “So I went to the track. It was one of those calculated risks where I knew this was the opportunity of a lifetime.”

That decision turned out to be one of the best decisions he would make in his career. That year, he graduated and moved to Fort Wayne for a television job. However, he still made the trek down to Indianapolis to work with Carnegie during the month of May.

Calabro would end up working alongside the voice he heard as a kid for 21 years. In 2006, Carnegie retired and handed over the reigns as chief announcer for the track to Calabro.

Donald Davidson, Indianapolis Motor Speedway historian, said Carnegie was very fond of Calabro and mentored him along the way.

“It seemed like for years he was the heir apparent,” Davidson said. “Carnegie really liked him. When Tom Carnegie no longer did it, out of respect for him they did not name a chief announcer, but I think it’s pretty obvious it was Dave Calabro.”

Calabro added to this, saying that for years the joke was that he was Carnegie’s intern. Calabro said that the two became so close that by the time Carnegie passed away in 2011, Carnegie was “like family to me.”

Carnegie never told Davidson why it was the two became so close, but Calabro’s hard work and knowledge of the sport must have had a lot to do with it.

“Dave was a race fan and was very knowledgeable,” Davidson said. “And so he had the voice plus he was knowledgeable and spent a lot of time out here. But I don’t know why exactly it was they connected.”

This year marks the 31st consecutive year he has worked the PA at Indianapolis. With roughly 21 days during May devoted to track time, Calabro estimates he has missed a total of three days at the track.

Even while working in Fort Wayne, or Dayton, Ohio, where he went next for five years, he was still able to make it to the track. The NBC affiliate in Dayton had him cover the race the entire month, reporting live from the track five days a week.

After six years removed from Indianapolis, Calabro found his way back to town and landed a job at Channel 13 news, where he’s been for 24 years.

Bridge also worked with Calabro when he spent time at WTPI radio in Indianapolis his senior year at Butler. Bridge took note of his hard work and dedication to the field.

“Dave was a very hard worker, he said. “And that’s one of the things I’ve admired about him. He has the talent, knows it, but also knows that talent isn’t all that will make you successful in this field. He would volunteer to work weekends, and as a senior in college, that’s impressive.

“He makes it look like he’s having and good time and is just talking about sports, but nobody sees the preparation: the research and practicing in front of a mirror. He gets on the air and makes it look easy.”

Calabro said he is the person he is today because of Butler University and its professors. He specifically mentioned Jim Phillippe, who was chairman of Butler’s radio and television program for 21 years, as well as the manager of the station Carnegie created.

“He was a professor at Butler who really grabbed me by the ear and helped me along the way and gave me some tough love when I needed it,” he said.

Calabro also mentioned Ann Harper, who was a radio professor at the university.

“She impacted a lot of lives,” he said. “She really shaped me, calmed me down and helped me focus. She came along side me and nurtured me and helped me grow into a broadcaster.

“I was a smart alec, know-it-all high school kid when I went to Butler. I had done a lot of radio and worked in commercial radio, and I thought I was pretty special. I was God’s gift to broadcasting. And then I got to Butler, and there were probably 70 other kids that were like me. I will forever be indebted to them for what they did.”

Away from the track, Calabro still works for Channel 13 news. And even though he thought radio was where he wanted to go as a kid, it’s the perfect job for him. The self-acclaimed “type A personality” gets to cover so many different sports both big and small. And just when he gets tired of one sport, it’s on to the next.

“My job everyday is something totally different, which I love,” he said. “I have that kind of personality that if I had to be in an office every day I might go crazy. That’s what I love with my job. About the time I get sick of Pacers basketball and NBA season, it’s time for race season, and when I’m sick of that, boom, guess what, we’re into high school, and then it’s Colts season. And then you mix in the Olympics, and I’ve even gotten to interview presidents.”

Calabro was able to became a name on the racing scene just like he had dreamed about. When you walk around a racetrack and mention the name Dave Calabro, especially around the IndyCar Series, they will know exactly who you’re talking about.

This is part three of a four-part series highlighting Butler University’s connection to the world of auto racing. Continue to visit thebutlercollegian.com for more features.