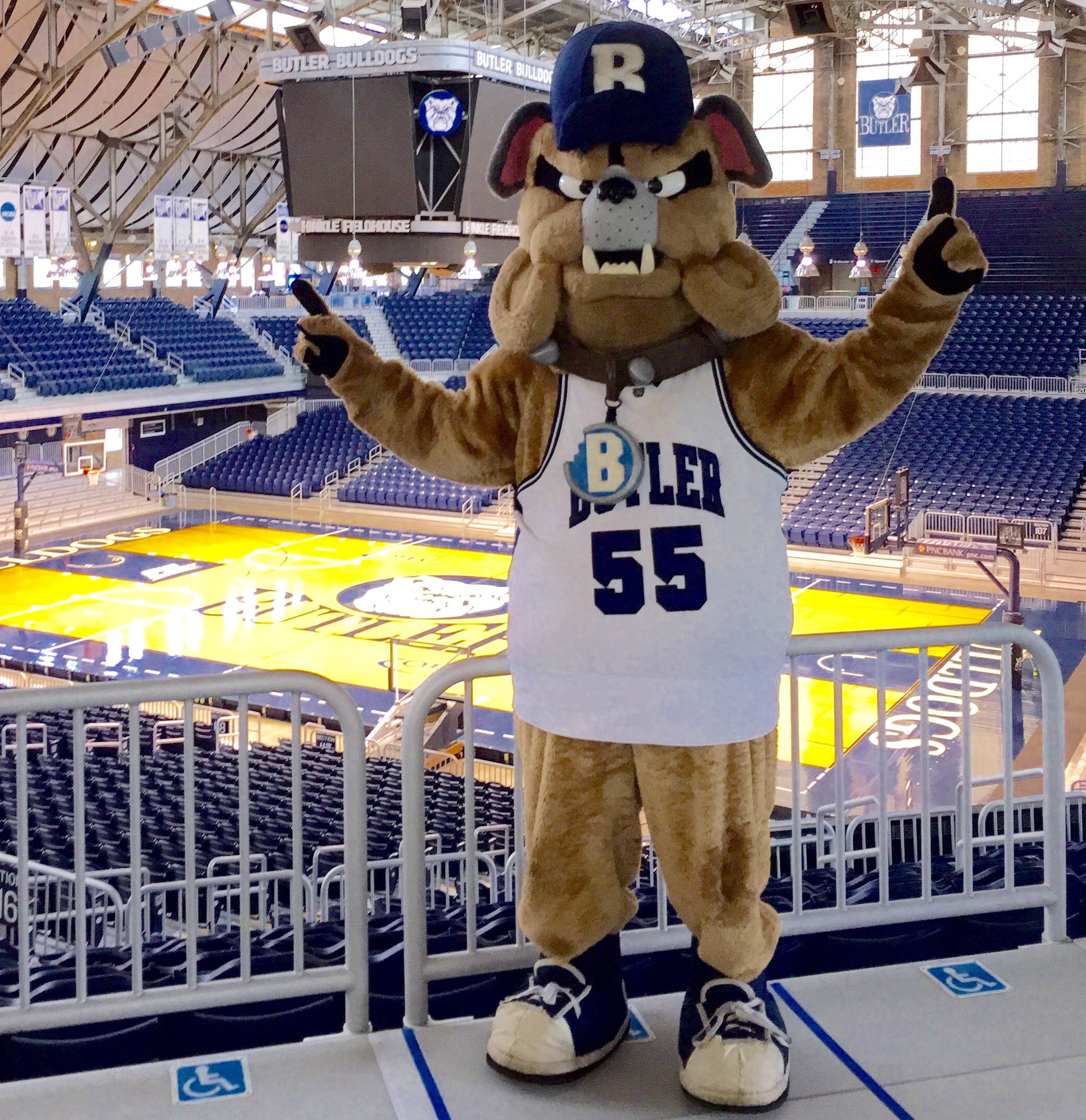 Senior Hannah Meinen poses in her Hink costume inside Hinkle Fieldhouse before the renovations were complete. Photo provided by Hannah Meinen.

Senior Hannah Meinen was scared of mascots, until she became one herself.

“My parents always said when we went to Disney as a kid that I always took pictures next to the people dressed up,” she said. “So I don’t know where along the lines I stopped liking them.”

Which is why it makes complete sense that she is one of the five Butler students who gets to dress up and be Hink. Hink makes appearances at numerous different Butler sporting events and Indianapolis community events.

Meinen said she first heard about Hink auditions at the end of last year through the Butler Connection.

“When I heard about the audition, I thought I might as well do it to get over my fear,” she said. “It was very terrifying, but I really enjoyed it and ended up getting the position.”

That fear persisted, even after officially landing the job.

Her second time dressed up as Hink was at an event with mascots from professional Indianapolis teams and high schools.

“They were all super close to me,” Meinen said. “I was freaking out.”

The fear dissipated as she got into the swing of things, attending numerous events as Hink last summer.

Senior Hannah Meinen stands with her mother and father during the men’s basketball senior day festivities on March 5. Photo courtesy of Hannah Meinen.

“Hannah exuded a lot of school spirit and excitement for Butler,” Troyer said. “She enjoyed being around kids too which is a big part of most appearances.”

Meinen said being around kids was one of her favorite parts. Living in Westfield, only 20 minutes from Butler, also made it easier for Meinen to do a lot of Hink appearances.

“There are so many events that Hink does that he has to be there,” Troyer said. “She’s been so reliable. I knew I could count on her when she was scheduled for a Hink appearance.”

Another thing Meinen loved about being Hink was the anonymity of the whole job.

“I get to be goofy and silly and walk up to people I probably would never walk up to,” she said. “I kind of get to do whatever I want, and it’s totally acceptable.”

When Meinen is not being Hink, she is involved in many other things on campus, including the Alpha Chi Omega sorority and holding four different executive positions on campus, such as vice president of Butler’s chapter of the Best Buddies program.

Sophomore Christine Ellis works with Meinen in both the Best Buddies program and Alpha Chi Omega. Ellis got to know Meinen very well this year and said she really makes an impact in everything she is involved with.

“Her humbleness is apparent in everything she does,” Ellis said. “She doesn’t do anything for praise. She puts herself into something 110 percent because she truly loves to make a difference.”

Meinen will graduate with degrees in both Science, Technology and Society and Spanish. She will spend the next year abroad in Madrid where she will teach English to high school students.

“When I come back, I want to go to grad school and get my masters degree in public health,” Meinen said. “But I’m not really sure what I’m doing after that.”

Ellis said she believes Meinen will be successful after leaving Butler.

“Whatever she does, she will definitely impact those she works with just like she did for me at Butler,” Ellis said.

After overcoming her fear of mascots, Meinen said she will have good memories.

“I will always be able to say that I was Hink when I look back at my time at Butler in 20 years,” Meinen said. “It will always definitely be a conversation starter no matter what.”