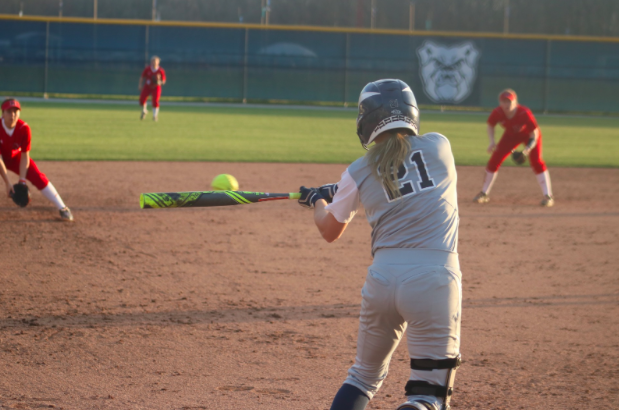 Freshman outfielder Jenna Foreman takes a successful hit while at the plate for the Bulldogs. Photo by Jimmy Lafakis.

After losing a single game to the nationally ranked Notre Dame Fighting Irish on April 14 and losing two out of three to the DePaul Blue Demons over the weekend, the Butler University softball team is now 23-18 on the year.

Getting a few swings in. First pitch against Notre Dame is 10 minutes away. pic.twitter.com/UPkBjyGU4P

For Butler, senior Kristin Gutierrez received the loss on the mound after throwing three innings and allowing zero earned runs on one hit. Sophomore Mikeila Boroff and junior Kacey Starwalt came on in relief. Second baseman Maggie MacBeth and designated player Chelsea Norwood each had a hit for the Bulldogs.

Against Big East conference leader DePaul, the Blue Demons took game one of the series, 9-1.  Third baseman Alyssa Lach had Butler’s only RBI, and it came on a single in the fourth inning. Gutierrez took the pitching loss after tossing three innings and allowing five earned runs on seven hits.

The Bulldogs responded nicely in game two with a 10-1 victory behind the impressive pitching performance of Boroff. She did allow ten hits on the day but only one earned run.

Leading the offensive charge was shortstop Cheyenne Thompson, who delivered a three RBI home run in the third inning. Right fielder Sarah Dixon hit a two run home run of her own in the next inning. Catcher Riley Carter added two more runs in the last inning with a single to center field.

In the game that decided the series, Butler fell to the Blue Demons 5-1. Boroff pitched 4.2 innings, gave up eight hits and allowed one earned run. Gutierrez pitched in relief and received the loss after allowing four earned runs on four hits.

Center fielder Brandyce Sallee had the team’s only RBI after hitting a single in the sixth inning.

Butler’s next game will be on the road against the Purdue Boilermakers on April 20 at 6 p.m.