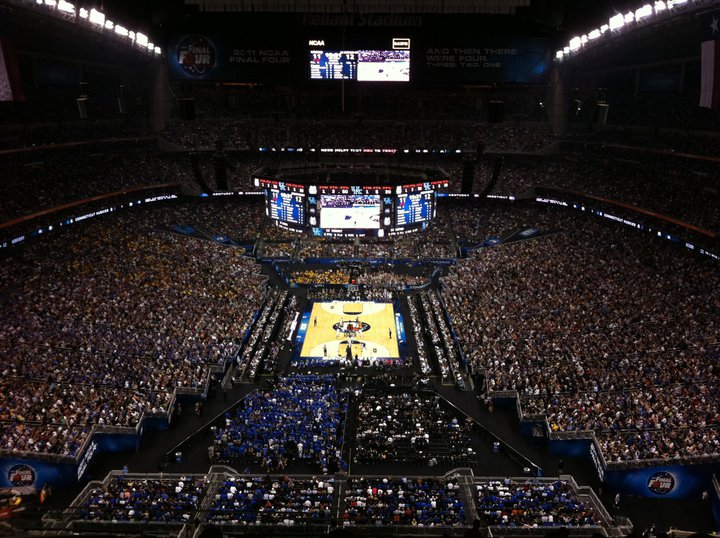 The 2011 Final Four in Houston, Texas. Butler lost to the University of Connecticut in this Final Four appearance. Photo courtesy of Aly Martinez.

The Butler basketball NCAA Tournament runs of March 2010 and 2011 were Cinderella stories in almost every regard. Butler was the Cinderella of the Big Dance, the smallest school to enter the Finals in tournament history.

A Cinderella fairy tale cannot end without a happily ever after. To assume otherwise implies that the time of riding off into the sunset is over, as if the sun could suddenly stop setting west, the red hues of the sky faded by reality.

The Butler story is without a happily ever after because the story is not over.

More than 1,000 seniors will graduate in Hinkle Fieldhouse this May –  the largest class in school history.

There is something to be said about the fairy tale that has unfolded beyond basketball.

After the March Madness appearances, applications rose almost 40 percent. The senior class is the direct result of a fairy tale that continues to prosper off the court.

More than 1,000 seniors. A number that represents ideas and innovation, community and individuality. A future of riding off into the sunset defined by Butler alum.

Butler’s happily ever after future is shaped by this graduating class. It is the beginning of the story, however, that brought many of them to Butler.

Senior Matt Michal recalled watching Butler’s 2010 run from his hometown of Minneapolis, Minnesota. It was an amazing story, he said, to watch the “ragtag” team’s journey to the championship game.

At the time, he was not rooting for Butler one way or the other, something he cannot imagine doing now.

“It’s really funny now to think about how much of my four years have been impacted by the basketball program,” Michal said. “I’d be lying if I said it wasn’t a big reason why I was interested in coming to Butler in the first place.”

The combination of March Madness appearances and a T-shirt brought the Minnesota native to Butler. In the aftermath of the 2011 tournament, Michal’s friend walked into school wearing a Butler t-shirt.

They started talking. Two visits to Indianapolis later, he was ready to call the school home.

“We got a tour of Hinkle Fieldhouse, and it was kind of my “Hoosiers” moment where you walk in and you look around and you realize that this place is really awesome,” Michal said.

Senior Evan Krauss had his “Hoosiers” moment in Hinkle early on. From Brownsburg, Indiana, home is only thirty minutes away from campus. His older sister was a Butler cheerleader. Krauss and his father watched Butler play Pittsburgh in 2011, driving 10 hours to Washington D.C.

The Cinderella stories. The Hinkle renovations. Standing in Dawg Pound for the first time. None of it changed his impression of the school.

“It wasn’t about us changing,” Krauss said. “It was about us being seen by these other people. The way Butler operates, we can help out students who want to be challenged. Now that we have that visibility we’re able to bring in top notch students.”

Michal said the tournament appearances give the school a national spotlight.

“It’s press that you can’t buy,” he said. “It’s the biggest deal in sports at the time. To have so many eyeballs on the team, it’s a great representation of what the university is trying to promote itself as.”

Blaire Langlois, a senior member of the women’s basketball team, committed to Butler her junior year of high school. That was 2010, the school’s first Final Four appearance.

“It made me excited to get on campus seeing how the men’s team did and try to replicate that on the women’s side eventually over time,” Langlois said.

Though the tournament did not change her view of the school, Langlois said Butler gained more attention from fans and prospective students alike.

“If they love basketball and if they’re from Indiana, it gave them a good reason to come here,” she said. “Purdue, IU and Notre Dame haven’t reached the Final Four, but Butler did those years. They see what a fun environment is and it’s something they want to be a part of.”

Krauss acknowledged that come March, it is not uncommon for professors to cancel class when Butler plays. The campus is quiet outside. Everyone is inside. The television is on. The volume is up. Everyone is watching.

Butler was the Cinderella at the Big Dance. In 2010, everyone was watching for the happy ending, including the senior class of 2016.

Six years later, the story is not over. The sun is not setting, and the blue skies haven’t quite tinted pink yet. The happily ever afters continues with the class of 2016.