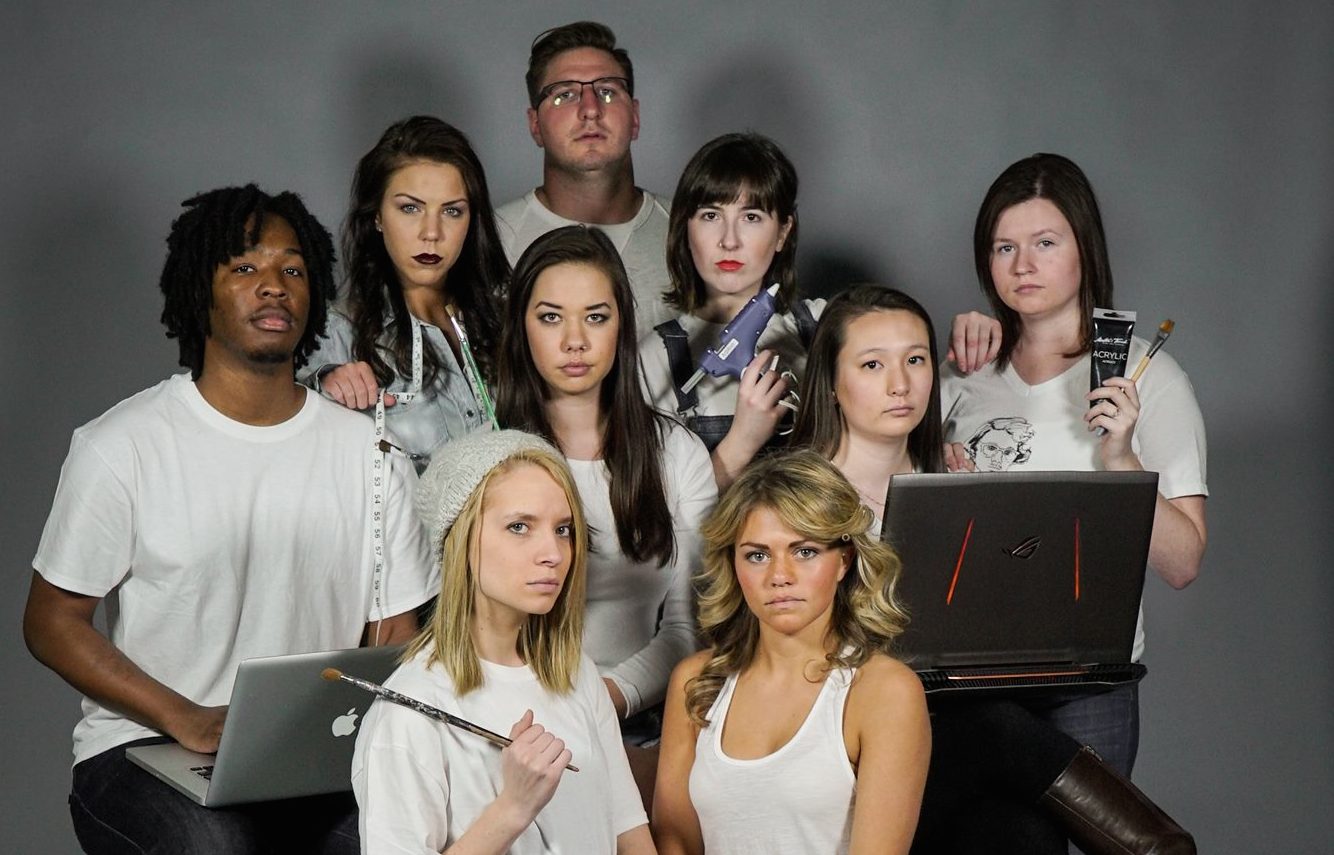 On March 29, 2016, nine Butler Art + Design seniors jointly presented their final thesis projects, gallery-style, in the Howard L. Schrott Center for the Arts. Artwork was created using a variety of materials and spanned several mediums, with each project built surrounding a unique central theme or area of interest.

Bekah Pollard’s colorful collection affirms and celebrates traditionally shame-ridden aspects of female sexuality and the female body. Taylor Mansinne used products we buy every day of our lives, such as wine and coffee, as materials in her collection, which explores the culture that influences us as consumers.

Brooke Dominguez took objects people have deep personal relationships with, and after exploring that relationship, transformed the objects to hold new meaning. Tori Adachi used layering of textures and attention to grimy details to showcase the uniqueness that gives character to her favorite cities.

Abbi Miles’ thesis is a series of book pages reflecting personal memories, created by overlapping text, paintings, and other visual art forms. Alyssa Dyke’s produced a collection of illustrations centered around the pre-production process of animation.

Joel Fuller’s animations served as an introduction to his upcoming graphic novel Xavian. Britt Garrett also created a book from her artwork: a collection of paintings and poems capturing the whimsy of the natural world.

Senior Josh Gaal chose to relate people’s personal stories in a universally understandable way with his series of portraits. “I have been very fortunate over this last year to meet some wonderful people and travel to unique parts of the world, but most importantly I have been able to reflect on [the] relationships I have had with these various places and people…My camera is a tool I use to help empower others,” Josh said.

Butler student Jake Michalski attended the event. “All of the work was different and unique in [its] own way. I loved it! I got to be a part of Britt Garrett’s body painting and I made it into her book. I plan on buying a copy,” he said.

Most student artwork on display was for sale. Community members and students have bought from student showcases in the past. Gaal explains that “it is an accomplishment because every decision that led to the purchase was a deliberate decision made by the artist.

So selling a piece is very reassuring of all the practice that we put in, in and out of the classroom. The best comes from when a faculty member that you have in class comes to a show, and they leave with a piece of your artwork.”

In past years, students have presented their theses in the Reilly Room in Atherton Union. This year, instead, collections were displayed in the Howard L. Schrott Center for the Arts.

Senior artist Taylor Mansinne had some apprehensions about the change of space, but was pleased with the opportunities it presented: “I wasn’t expecting a huge turnout because we did lose a lot of foot traffic from being in the Reilly Room. But I also think the move was a good choice. It makes us actually feel like professional artists being in a gallery.” Gaal agreed, saying, “Knowing that we were going to be in the Schrott helped inspire our class to put the extra effort into our projects and on top of that, take risks with our work.”

The event was advertised by the Art Program at Butler University on social media. Bobby Donnelly, who attended the event in support of his fellow Butler students, said, “In general, I think Butler could be a lot more proactive with its promotion of art. Even as a music major, I often do not know when various displays are happening, so there is definitely some room for improvement. Overall, I really enjoyed everyone’s projects and seeing the individuality that each artist possesses.”

Gaal himself, though, was gratified by the campus presence at the event. He said, “When you are standing next to your work and you see the president of the university standing side by side with a family member, a first year student, and alumni from the Jordan College of Arts, I think you can say we did a fine job of reaching as many people as possible.”