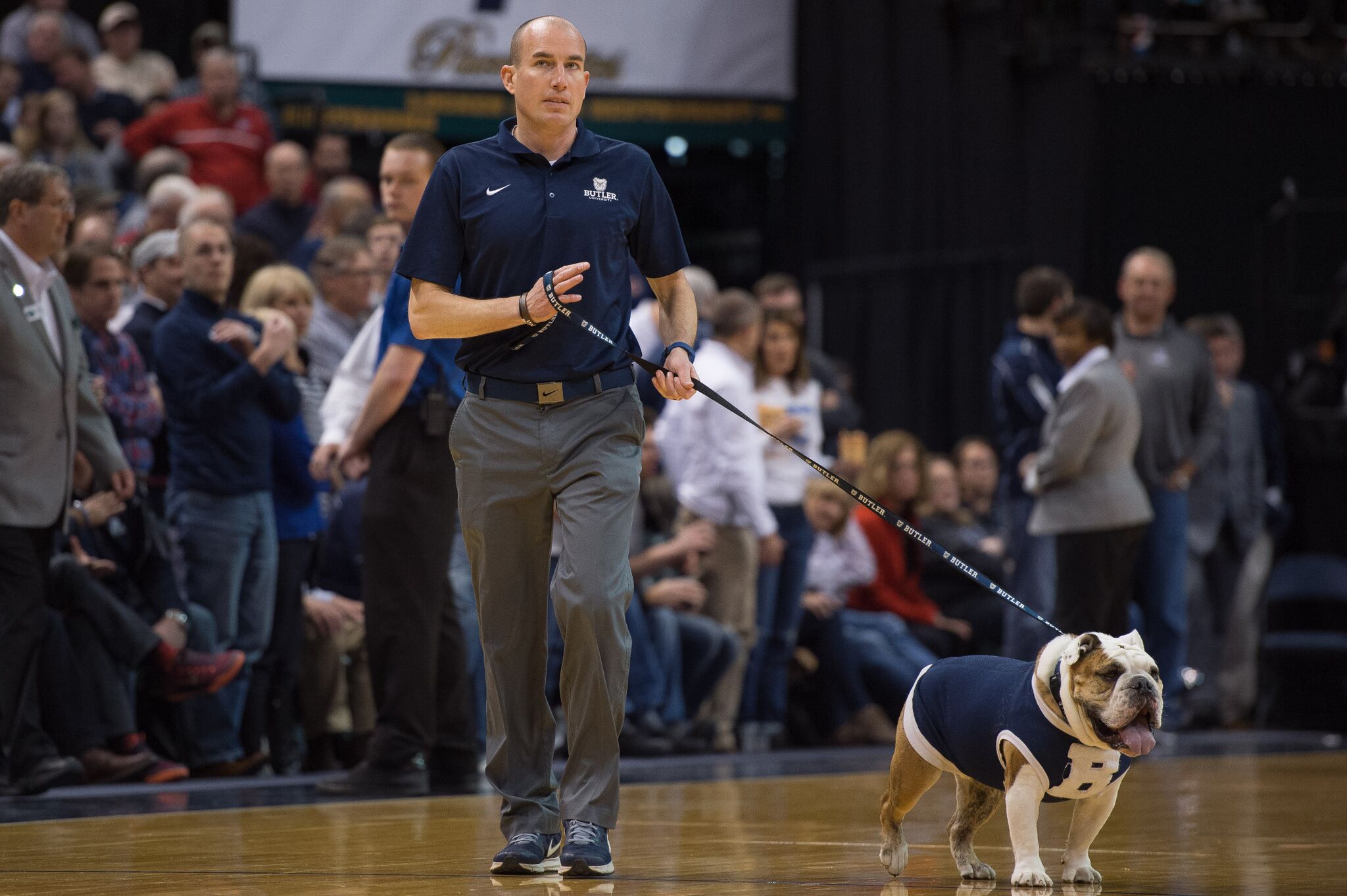 The man behind the face of Butler University is much more than a public relations man at Butler. In fact, he has a history in the IndyCar Series that spans more than 10 years.

Michael Kaltenmark is a 2002 Butler graduate. He has a Bachelor’s degree with honors in journalism and public relations. He was also a member of the Student Government Association, the Student Foundation and Phi Kappa Psi.

All throughout college, he thought his future was going to revolve around racing. He was an IndyCar fan through and through. He even had an internship at Newman-Haas Racing while in college.

By the time his final semester in college was starting, Kaltenmark had two PR job offers in racing: one with Walker Racing and another with CART, a now defunct racing series.

But Kaltenmark decided against taking the positions. The thought of instability and the quick approach of the real world made him think long and hard about what he wanted to do.

“They were two good offers in where I thought I wanted to work, but then I thought better of it,” he said. “I thought, ‘Eh, I don’t know if this is a good idea.’ I knew that [Walker Racing] was a lack of one sponsorship away from not racing.

“Whoever I signed on with were willing to fly me to the racetrack and have me do my thing, and then let me go back and finish school,” he added. “I knew the real world was coming, but this just seemed crazy. It was just a lot for me.”

Instead, he took a job with Butler as Associate Director of Annual Giving where he managed giving, donations and programs related to gift money.

Since graduating, he has gone through the ranks in fundraising and is now in the marketing department where he is the director of external relations and is the mascot handler. He started with Blue II, and he now takes care of Blue III, better known as Trip.

In 2005, a particular situation set Kaltenmark up with a race team. Three guys had started a team to run in the Freedom 100, a lower-tier series race before the Indianapolis 500.

The team needed help with public relations, and they gave Kaltenmark a call. He agreed to help the team out. It was just one month, he thought, and after that he could return his focus to his job at Butler.

The next month, Kaltenmark got a call from Vision Racing. The team was looking for a part-time PR representative.

Kaltenmark took on the second job as a public relations coordinator for the team. While it was technically a part-time position, Kaltenmark was the main PR man for the team.

At one point, he was in charge of PR for four teams during the Indianapolis 500 while also maintaining his job at Butler. He finally caved and asked if they could hire someone full-time, so he could return to part-time.

During the racing season, he spent his days on campus doing his full-time job. When he finished work for the day, he would spend time updating the team’s website, work on pre-race press releases and organize weekend schedules for the teams.

Depending on where the race was, he typically left town on Thursday evening to head to the track. There, he would manage PR and communications for the teams, assist the media in talking to the drivers and write press releases.

When the series was in Indianapolis, Kaltenmark would work half the day at Butler, and then head to the race track to work the other half of the day, finally heading home around 7 p.m.

Matt Mindrum, vice president for marketing and communications at Butler, said Kaltenmark has been able to balance motorsports and Butler very well during May.

“He’s always spent a healthy amount of time at the track, but it has never hampered his time in the office,” Mindrum said. “I’ve never noticed him drop a beat.”

Once they met, Kaltenmark noticed some commonality between them. They were both Butler graduates and had the same kind of mentality. Kaltenmark believes it was because of Carpenter he got his start in racing.

“I think when I got the call to help Vision Racing, I’m pretty sure that had been run by him first,” he said.

While there, Kaltenmark’s claim to fame was helping the team utilize Twitter to give fans a behind-the-scenes look at what was going on at the shop and in the garage. Now social media, especially Twitter, is a huge part of racing, allowing fans to stay connected like never before. Vision Racing was one of the first to take advantage of social media.

Kaltenmark was trying to show sponsors that there was value to Vision Racing. They weren’t the most popular team in the sport, nor did they run up front enough to get television coverage.

“I just started live tweeting races,” he said. “If we can’t get on TV or radio, I’ll just tell you what we’re doing.”

Carpenter said Kaltenmark has always been ahead of the game.

“We were the first team on Twitter,” Carpenter said. “He’s always been ahead on things like that. I have a lot of respect for his capabilities.”

With that, the team gained more popularity with the fans, and that in turn forced the media to start covering the team more often.

It couldn’t last forever, though. Due to a lack of sponsorship, Vision Racing suspended operations early in 2010. Carpenter switched to another racing organization, Panther Racing, where he raced on a part-time basis. Kaltenmark followed suit.

“I was sort of half in the game there,” Kaltenmark said of the team’s four-race season. “The next year, Ed went to race for Sarah Fisher, and I sat out that year.”

The following year, 2013, Kaltenmark rejoined Panther Racing for the month of May.

In the meantime, Carpenter started his own race team, Ed Carpenter Racing. In 2014, Kaltenmark and Carpenter joined forces again as Kaltenmark was hired on to do public relations on a part-time basis.

Carpenter said he keeps calling him back for Indianapolis because he really enjoys Kaltenmark and appreciates his abilities.

“He likes to be involved, and I like being around him,” Carpenter said. “He’s really good at what he does. Just what he’s done with Blue II and Trip and how he’s built that program.”

With Ed Carpenter Racing, Kaltenmark has worked mostly during the month of May and doesn’t spend nearly as much time at the track.

“I’ll be there for the qualifying days, Carb day, any of the big stuff,” he said. “And then I’ll spend most of the day at Butler. I’ll head to the track for Happy Hour and help them close out the day.”

The friendship between Kaltenmark and Carpenter didn’t begin in college like many would expect. They didn’t know each other while at Butler. They had only met after Kaltenmark graduated when he would reach out to Carpenter, who graduated a year later, to take part in events related to Butler.

“We didn’t hang out, we weren’t buddies, which is weird for the both of us,” Kaltenmark said. “We just didn’t run in the same circles.”

Once at Vision Racing, the two had become close friends, which is the reason Kaltenmark continued to follow Carpenter as he switched teams. Now, they’re closer than ever.

Carpenter said Kaltenmark is someone he knows he can trust and go to for advice.

“He’s always someone that I go to for advice on different things because he’s very innovative and good at what he does,” Carpenter said. “I trust him. He’s just a good guy.”

On a professional note, Mindrum also talked about how important Kaltenmark is.

He told a story about when he was hired at Butler. He recalls President James Danko telling him, “The only thing worse for Butler besides losing Brad Stevens is losing Michael Kaltenmark.”

All in all, Kaltenmark said things seemed to work out pretty well. He worked his way up the ladder at Butler and created great friendships along the way. Sure, sometimes life was hectic, but in the end, he said, it was all worth it.

This is part one of a four-part series highlighting Butler University’s connection to the world of auto racing. Continue to visit thebutlercollegian.com for more features.