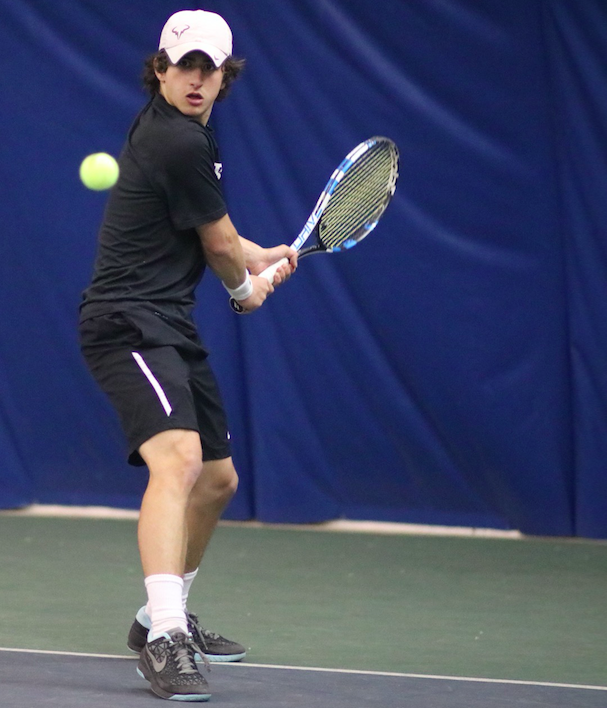 Freshman Adrian Mag pulls back for a swing during a match in the Butler Bubble. Photo by Jimmy Lafakis.

The Butler men’s tennis team lost a pair of Big East matches on April 16 and 17. The Marquette Golden Eagles claimed a 5-2 victory over the Bulldogs, while the DePaul Blue Demons took a tight 4-3 win.

On April 16, Marquette quickly claimed the doubles point. Junior Alex Woldmoe and freshman Adrian Mag dropped a 6-1 decision at No. 2 doubles. The freshman duo of Ari Gerstein and Spencer Lang also fell 6-1 at No. 3 doubles. Freshman Mason Dragos and junior Mikheil Khmiadashvili did not finish their match.

Dragos and Khmiadashvili were the only Butler victors in singles competition. Dragos won 6-2, 6-2 at No. 1 singles, while Khmiadashvili claimed a 3-6, 6-4, 6-3 victory.

Gerstein said he was not discouraged by the team’s performance.

“I think we played the tennis we want to play in conference,” he said. “We are all playing with confidence, and we were just a few points away from winning the matches that we lost.”

The match against the Blue Demons proved to be a thriller.

Dragos and Khmiadashvili claimed a 6-3 victory at No. 1 doubles, but the Bulldogs dropped the other two points.

“When it comes to Big East play, I think it is a lot more intense,” he said. “There are definitely a lot of emotions, and everyone seems to be more dialed in because there is much more on the line.”

Butler may have lost their first Big East matches, but Lang remains optimistic.

“We feel that we are right there with them,” he said. “We are getting better from every match because we are getting more confident and mentally tougher.”

Butler will close out their Big East slate against the Xavier Musketeers on April 23. First serve in Cincinnati, Ohio is scheduled for 2 p.m.