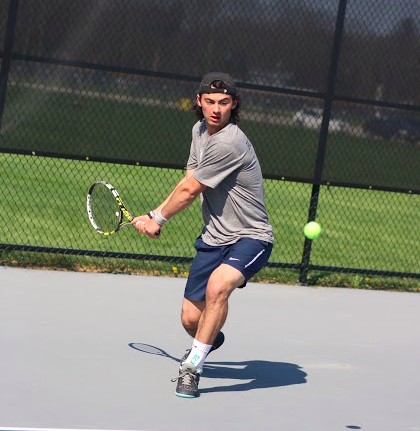 The Butler men’s tennis team blanked the DePauw Tigers 7-0 on April 7. Butler boosted their record to 9-8, while DePauw fell to 6-8.

Butler began their last home match by sweeping the doubles point. Freshman Mason Dragos and junior Mikheil Khmiadashvili won 6-4 at No. 1 doubles, while the freshmen duo of Ari Gerstein and Spencer Lang followed suit with a 6-2 No. 2 doubles victory. Freshmen Adrian Mag and Temilope Adelakun rounded out the point with a 6-4 win at No. 3 doubles.

Junior Alex Woldmoe did not participate in the match due to injury.

“We felt great today,” Mag said. “We were energetic and wanted to win.”

Lang believed that the team’s loose play led to the sweep, which was Butler’s second of the season.

“We just need to keep playing to our potential and continue to play freely,” he said. “We need to focus on the process and not the outcome.”

The Bulldogs are now on a five-match win streak. Gerstein believes the team’s growing confidence will help them moving forward.

“We will use this win to help our confidence,” he said. “Our good play will definitely carry over this weekend against IU.”

Butler will take on the Hoosiers in Bloomington, Indiana on April 10. First serve is scheduled for 5 p.m.