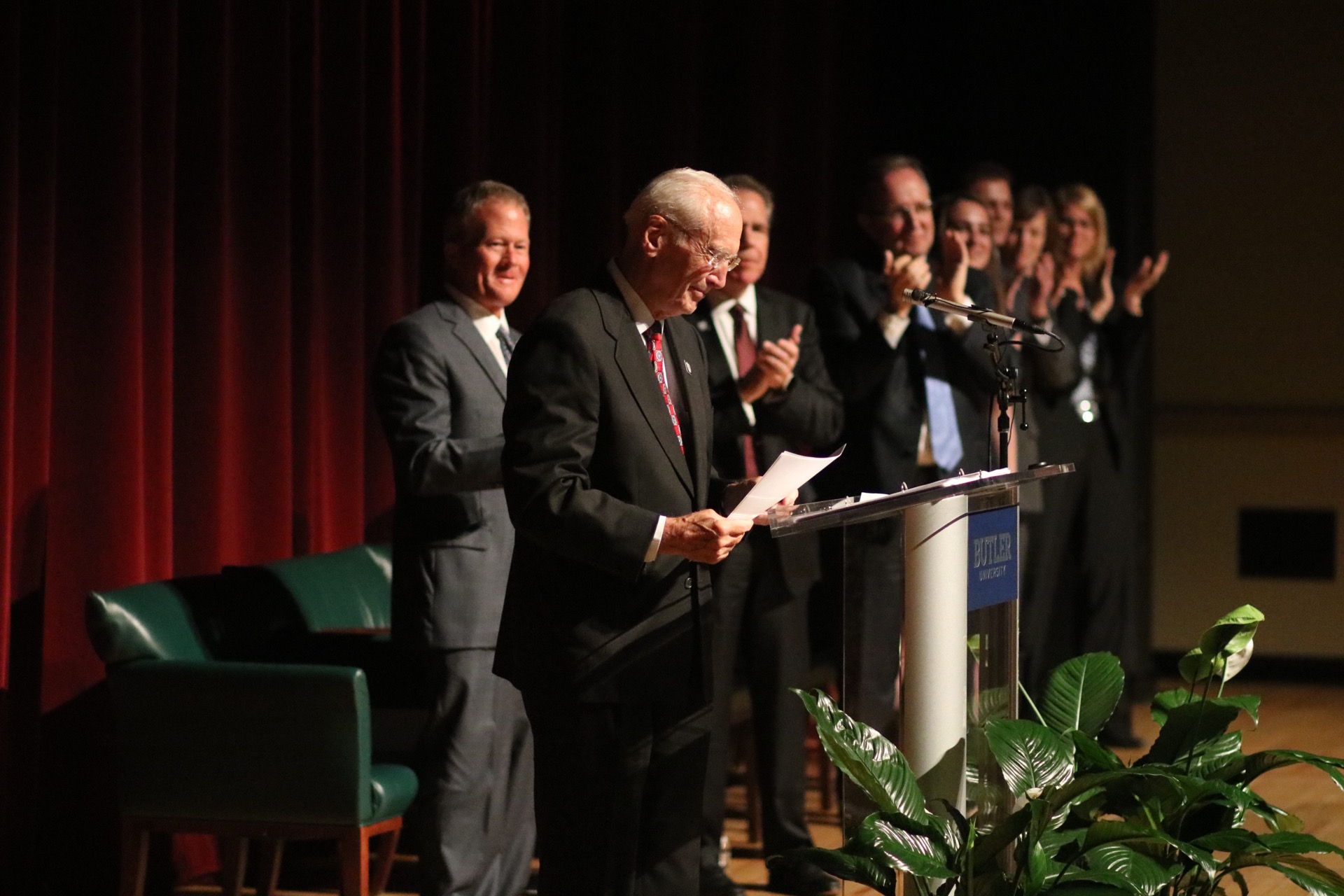 Andre Lacy and his wife Julia gave a $25 million donation. In honor of the gift, Butler renamed the College of Business the Andre B. Lacy School of Business.

Lacy, chairman of Lacy Diversified Industries, will also serve as senior adviser to the college.

“This day earns a check mark in the win column for me,” Lacy said. “That’s exactly what it is—a win, win, win all the way around.”

President Jim Danko announced the gift in the Schrott Center at 11 a.m. to an audience filled with administration, COB faculty and students.

Danko said it is his role to establish relationships with people in the community, both alumni and non-alumni. He spent the last few years nurturing relationships.

“I have been working this deal for a while,” he said. “We have grown close, and I approached him in the fall about considering major support.”

Lacy reached out with the confirmation of the donation in December.

“That was a pretty darn good day,” Danko said.

He said he will begin turning to other people he has made relationships with too.

“This is the first of many,” Danko said.

During the announcement of the gift today, the crowd leapt to its feet in a standing ovation before Danko even finished his sentence.

For 46 years, Lacy served as CEO of his company, which is a fourth-generation family business. The company, founded in 1912, began as a corrugated box company. It has evolved into a group of diverse businesses, ranging from automotive paints to medical supplies.

Lacy graduated from Denison University in 1961 with a degree in economics. In his remarks, he said this—the fact he is not a Butler alum—made the investment a bigger vote of confidence in the university.

“I’ve seen Butler emerge from a quiet campus in the heart of Indianapolis to an incubator of progressive business curriculum,” he said.

Photo by Jimmy Lafakis
Seniors Jenny Hinz and Chad Pingel talked about Lacy’s impact on them.

Senior Chad Pingel is the former Student Government Association president and the most recent winner of the Lacy scholarship.

“I met him and it was very apparent he was very special,” he said. “He really cared about the students and what he was doing with us.”

Pingel said the announcement was incredible.

“I watched my professors’ faces the whole time,” he said. “I got to see the people I’ve learned from over the past four years be so elated.”

Senior Jenny Hinz, who was partnered with Lacy for a mentoring program, agreed with Pingel. She said it was hard to keep such a large secret, but it was worth it to see the reaction.

“It was so fun to see everyone jump up,” she said. “It was an awesome feeling to be up there and watch.”

Hinz spent time with Lacy in his downtown office for the mentoring program. She said the best piece of advice Lacy gave her was to write down her goals no matter how small.

“He sat behind his desk as the insightful, successful professional,” she said. “I sat on the other side as the curious novice. Then he moved to sit in a chair next to me, showing how intently he cared about me and my thoughts.”

Danko said it will be extraordinary to have Lacy’s experience and wisdom on campus.

“Andre Lacy has demonstrated—through his business success, community leadership, and love of life—a tireless desire to achieve excellence and to help others,” he said.

Danko said the gift will help elevate the entire university by adding attention and prestige to Butler’s name in the crowded market of universities.

Junior Claire Krohn, the finance analyst intern at the Butler Business Consulting Group, attended the announcement and agreed with Danko.

“It pertains more to business majors, but it adds value to everyone’s degree,” she said. “It puts us on the map with other named schools like Indiana University’s Kelley School of Business. It gives us a chance to become more elite.”

Krohn said the donation could allow the program to grow in its offerings to compete with more universities.

“We are already short-staffed it seems,” she said. “We could hire more faculty to help build the program to make them even more successful than they are now.”

She was also pleasantly surprised by how quickly the renaming took place.

T-shirts were handed out after the announcement, and a banner is already hung up outside the Holcomb Building.