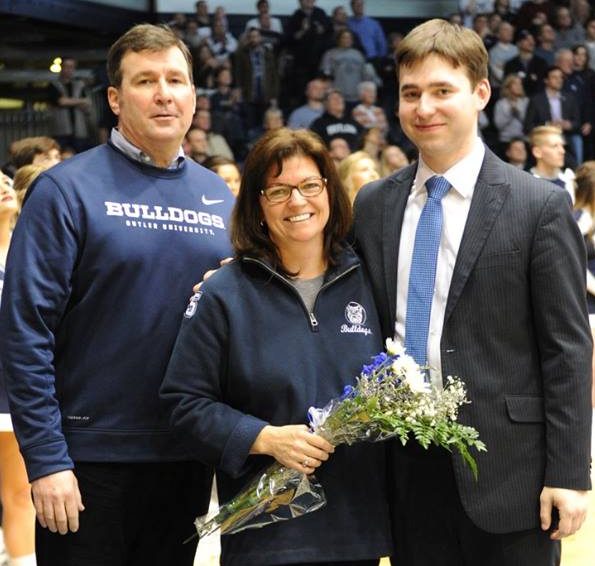 Murphy expected a graduate assistant or an assistant coach, but instead out of the elevator walked Brad Stevens, former Butler head coach.

Murphy remembered looking up and seeing Stevens smile and say, “You ready to go, Christian?”

The two walked to CVS during the night in the Bronx, New York, carrying bags of Gatorade back to the hotel.

Murphy said this is one of his favorite memories as a bulldog.

Now, Murphy is in the final weeks of his college career, set to graduate in May with a degree in organizational communication and leadership.

Murphy served four years as a manager for the basketball team and saw the team grow from a budding mid-major to a rising national title contender.

Murphy grew up in West Hartford, Connecticut, and always dreamed of coaching basketball one day.

“Since high school, I’ve always had the goal of becoming a college coach,” Murphy said.  “Since I didn’t play, the best way to get into coaching is being a manager.”

When it came to choosing a college, Murphy stumbled upon Butler, right on the heels of the back-to-back national title runs in 2010-11. Although basketball played a hefty role in his decision, school took priority for Murphy.

“I was attracted to Butler from both a basketball and school standpoint,” he said. “I knew I could be a manager my freshman year, and I also loved the school aspect as well.

“Butler is a small school with great academics. It’s right outside the city, with a great community, and reflecting back now, I’m so happy I chose to go outside my comfort zone and come to Indiana.”

When Murphy arrived on campus and began work, he noticed the exemplification of “The Butler Way” in the locker room.

“I was surprised when I came to Butler because the players were so welcoming,” he said. “It has been easy to develop friendships with the players and even coaches.”

Murphy was a member of the team throughout the changes in conference, renovations in Hinkle and coaching changes. From Brad Stevens, Brandon Miller, and eventually to current head coach Chris Holtmann, Murphy saw a constant in their behavior.

“All the coaches who have come through [Butler] the past four years have taught me so much,” Murphy said. “Watching them prepare for games and practice and just talking basketball outside of practice helped me learn a lot about the game.”

Freshman manager Sam Sturtevant worked under him this season as Murphy was named co-head manager with fellow senior Matt Richter. Sturtevant said he will miss Murphy’s sense of humor and work ethic in the locker room.

“Murph is a fantastic guy who always makes people laugh,” Sturtevant said. “Though when it’s time for basketball, he’s always ready to work.”

These characteristics are sure to help the 22-year old reach his goal one day. The first step for Murphy will be a graduate assistant job at another school. He is still waiting to hear back from colleges after sending out a round of applications.

Fellow manager Patrick Baker, who worked with Murphy for three seasons, has no doubt that Murphy will one day lead a college team.

“Murph brings energy and excitement every day whether it’s on the court or off it,” Baker said. “It’s obvious he has a passion for the sport, and that is one of the main qualities that will help him reach his goals.”

His dedication and love for the game will be missed at Hinkle Fieldhouse and in the locker room as the Bulldogs prepare for what will be another hard fought season.

“This experience has taught me so many things,” Murphy said. “It taught me to be mature and to worship every day I get. It’s been a great four years.”

A popular topic that has been discussed thus far into the off season is: How will Butler replace the likes of Roosevelt Jones and Kellen Dunham? Although these players played a major role in the success of the team, the media fails to look behind the curtain for other important members of the production.

Another question that should be circling the halls of Hinkle is: How will the Butler team replace valuable managers like Christian Murphy?