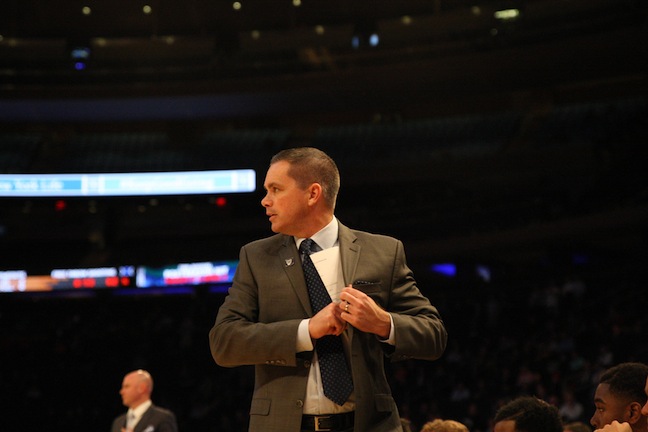 Winning games the right way is something that every coach not only values but also fights for.

Chris Holtmann, head coach of the Butler University men’s basketball team, knows this perhaps more than anyone else.

“The Butler Way is bigger than all of us,” Holtmann said. “It’s really as much about how you live your everyday life as it is about how you play.”

Holtmann started his coaching career at his alma mater Taylor University and became the head coach at Butler after the previous coach requested medical leave.

He said that his program is based on getting athletes who are the right fit for the university and maximizing their potential.

“We try to recruit really good kids, and we try to coach them in a positive way,” Holtmann said. “It’s a program that values team guys with a team approach. We’ve been fortunate to have guys that really embraced that.”

He said the goal of the team down the road is centered on maximizing the potential of each student-athlete and, more importantly, the team as a whole.

Barry Collier is the vice president and director of athletics at Butler University and oversees all athletic operations. He said he has a close relationship with Holtmann and the team, and attends practices frequently.

“Contributing to the growth of student-athletes – helping them grow to their highest goals – that is our priority,” Collier said. “Secondly, connecting people to Butler University is huge for us. We want to be a source of pride and unity for Butler, have fiscal sustainability, success in the field of play, and success for our student-athletes.”

Along the same lines, sophomore shooting guard and sports media major Kelan Martin said, “I think Coach Holt is more focused on his players than other coaches. Other coaches are focused on recruiting, but he’s always looking out for his players – trying to make them better people on and off the court.”

On the court, the team has been tremendously successful, especially in recent years.

“We’re not known as a major school, but we compete with the best,” Martin said. “We beat good teams, and it’s nothing new for us. Moving towards the future, people are going to start respecting us more.”

Levester Johnson, the vice president for student affairs and a familiar face for many around campus, said that this success has been tremendously impactful for Butler University as a whole.

“Making one Final Four is huge. Making two is extraordinary. The institution has reaped the benefits in enrollment and exposure, as people who wouldn’t have considered Butler at all have been shone a great light on us,” Johnson said. “The level of publicity that Coach Holtmann and his guys have earned has assisted us from a marketing standpoint in so many ways.”

Johnson said he admires Holtmann and the entire athletic department most for their ability to maintain the standards of the Butler Way on and off the court.

“We have true student-athletes here,” Johnson said. “Undergraduates who are really focused on their academics and performing at a high level in their academics and who also exhibit the same tenacity on the basketball court, the track, the baseball diamond; you name it, they’re excelling in both places.”

Collier said that part of what struck him first about Holtmann was his dedication to that standard.

“A coach must have the utmost integrity and want to do things the right way,” Collier said. “Holtmann has that, and it’s non-negotiable. The way we accomplish these great things; the way we win those big games, the type of basketball we play and the type of student athlete we have on our team – that’s what Holtmann wants to stress.”

Tom Crowley is the deputy director of athletics at Butler University and a former basketball coach himself. He said that Holtmann is a strong presence for Butler in every way.

“How he treats people, from his staff to those in the university to his student-athletes, is an incredible characteristic of his,” Crowley said. “The way he treats people is outstanding.”

In addition, Crowley said that he is truly impressed with Holtmann’s commitment to the Butler Way.

“Working for something bigger than yourself is a wonderful lesson that can be applied to every part of life,” Crowley said. “The whole is greater than the sum of the parts, and embracing that is great coaching. Holtmann does a tremendous job of that.”

Similarly, Holtmann said that he recognizes the value of a unified team.

“I think our players, current and former – we all have really embraced this family atmosphere that has been created here at Butler,” Holtmann said. “It’s an incredibly close group, on and off the court.”

Martin said he too feels a very strong sense of community surrounding the team.

“You really don’t see us together on campus, but in the locker room we’re a family – on road trips and at practices, we share everything and create memories,” he said.

Martin said that he attributes part of that sense of family to Coach Holtmann, and that his coach is more like a teacher than anything.

“He just wants you to get better,” Martin said. “He’ll watch film with you, whatever it is. He’s just a high character guy, and always has a smile on his face.”

Johnson said he saw evidence of the positive team atmosphere from Holtmann and his team all year.

“First and foremost, Butler emulates that it is a team effort. It’s not about the individual, it’s about collective efforts towards a goal and improvement,” Johnson said. “Both the basketball team and the university have done that in each of the 20 years that I’ve been here. We’re always striving for more, and that hasn’t changed under Coach Holtmann.”

Holtmann has not limited that continuous drive for more to just the basketball arena. He said that it’s much more gratifying to be a part of a system that succeeds while doing things the right way.

Johnson said that he is clearly able to see the focus on the Butler Way in every game, and that it is vital to the identity of Butler as a basketball team and as a university.

“Your play is a microcosm, just a footnote, in what is going to be your life, and in comparison to issues of what family and community mean – those are the important lessons on the court, and those can’t be summed up in wins and losses,” Johnson said. “Coach Holtmann and his team do a great job of exhibiting that every time he steps on the court.”