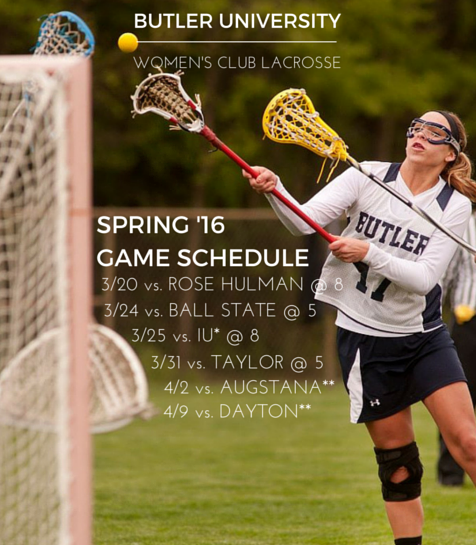 A new season is on the horizon. Butler has officially added women’s lacrosse as their 20th Division I sport and will begin play in the 2016-17 academic year. New head coach Cecil Pilson is at the helm.

Pilson, who led Mercyhurst University’s program for the past 11 seasons, was hired on Dec. 16, 2015. He posted a 133-57 overall record for a .700 winning percentage during his tenure at the Division II university. Pilson will guide a combination of current club lacrosse players, incoming freshmen and transfer students.

“It’s going to be a building year,” he said. “I hope to lay a strong foundation for Butler University, and I feel that Butler has a lot to offer our student-athletes.”

Pilson jumped on the opportunity to build a varsity program from scratch.

“I turned down a lot of Division-I jobs leading up to this,” he said. “This place sold me because it’s a great academic institution coupled with being a Big East program.”

He inherits a group wet behind the ears. Despite their youth, he sets the bar high.

“I am expecting certain players to step up,” he said. “I want them to take the reins.”

One of those players is junior Kathleen Cihota. She hopes her experience will help guide Butler.

“I will do my best to lead and mentor the newest Bulldogs on and off the field,” she said. “While we are all new to this team, we will work to make sure everyone feels included and at home.”

Freshman Kelly Burger currently plays for Butler’s club team. She looks forward to creating new bonds with her team at the varsity level.

“I know it’s going to be a bit of a struggle making the transition,” she said. “We’re going up against teams that have been established for years, but I look forward building a team dynamic and figuring out our rhythm as a whole.”

That camaraderie attracted freshman Kendall Swartzell to the next stage.

“Having your teammates around you is a feeling you can’t duplicate off the field,” she said. “I’m really looking forward to meeting and playing with a bunch of girls that love lacrosse as much as I do.”

Once Pilson put his faith in Swartzell and her teammates, she was assured that making the leap was the right decision.

“Coach Pilson is really the person who convinced me to play Division I in the first place,” she said. “He’s been really supportive of all the girls that he’s talked with, and it’s why I feel so confident about playing on this team next year.”

Freshman Carly Hewitt served as a manager on the women’s soccer team this past season. Once the opportunity to rekindle an old flame opened up, she capitalized.

“Throughout high school, I was always a two-sport athlete,” she said. “There wasn’t a day where I wasn’t in the gym or on the field, and it’s going to be a great feeling when I get back out there.”

Hewitt is ready to embrace the challenges that come with a new environment.

“It’s just starting out, but I am confident that the program will only grow over time,” she said. “I am most excited to get back to competing.”

Neither a roster nor schedule has been finalized yet. The club team will kick off their season against Rose-Hulman Institute of Technology  at Butler on Sunday, March 20 at 2 p.m.