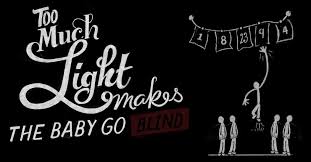 Chicago’s longest-running show is coming to the Butler ArtsFest. The Neo-Futurists will  perform Too Much Light Makes the Baby Go Blind at Lilly Hall April 8-10.

The troupe’s main selling point is experimental theater, as they will attempt to perform a staggering 30 plays in a mere 60 minutes. The cast has written over 9,600 of the small plays since 1988.

Kurt Chiang, artistic director, will embrace the challenge at Butler for the first time. He has performed in the ensemble since 2008. The plays, which are all true, are written from the actors’ own experiences.

Neo-Futurists from the past and present will be performing at Butler. The cast plays as themselves, and Chiang invites the crowd to become part of the action.

“We won’t ignore you, because it would be rude to do that,” he said. “Each play can interact with the audience at any number of levels, and we’re always writing new plays to explore that relationship.”

Ida Cuttler joined the ensemble in 2014. She looks forward to the tests that come with each performance.

“The show challenges me to share my honest opinions with an audience and develop my point of view,” she said. “You are always on your toes, and the time constraint makes it a full body, mind and athletic effort.”

Cuttler wants the audience to explore new ideas. She embraces the opportunity of performing at a college scene.

“I think it is fun to go to colleges,” she said. “We challenge what their perception of seeing a ‘theater’ show is. They go and see us expecting one thing, and hopefully they leave seeing another.”

Bilal Dardai has performed in the ensemble since 2004. He served as the booking coordinator from 2009-2012 and the artistic director from 2012-2015. Dardai knows the show inside and out.

“We’re required to be honest the entire time we perform, and that gives us drive to get past our hesitation,” he said. “It always feels like sport, except everybody in the room is on one team and time is the only opponent.”

The audience may have mixed reactions to the show because they may not know what to expect from a theatre troupe performing numerous plays in a short amount of time.

“Some people find it an amusing lark and nothing more,” Dardai said. “Others find it an annoying exercise, and some only think it’s hilarious.”

Dardai enjoys presenting the Neo-Futurists’ offering around the country.

“We have the opportunity to respond to the world in an evocative way each weekend,” he said. “That is a gift that we try to share with the audience.”