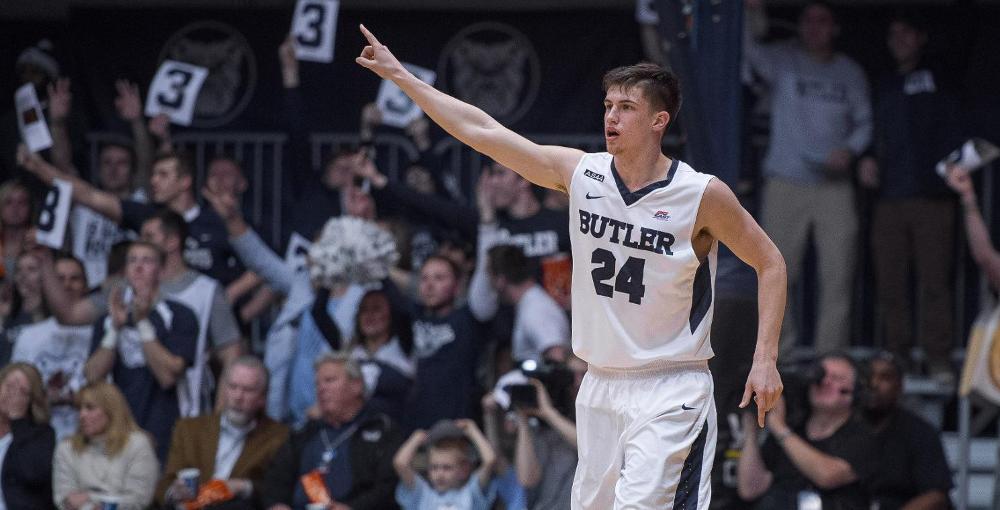 Usually when the Butler Bulldogs face a lead or a challenge, they embrace it. They fight back with everything they have, grinding it out until the final seconds tick off the clock. Tonight was perhaps the biggest challenge the Dawgs faced all season, but this time they fell short, way short.

Final stats from @PCFriarsmbb‘s 74-60 victory over @ButlerMBB. The Friars will square off with @NovaMBB tomorrow! pic.twitter.com/SeCPhd9pku

“We did not play well today,” Butler head coach Chris Holtmann said. “Providence certainly had something to do with that. I think we contributed to that. We played out of character at times. But give Providence credit for the win.”

Providence came out in typical fashion, pushing the ball up the floor, playing fast looking to get layups in transition. Providence superstars Kris Dunn and Ben Bentil lead the attack for Providence, putting up 22 of the team’s 32 first half points. The Bulldogs could not get in a defensive rhythm as the Friars converted basket after basket and built a lead as big as 19 and put the game out of reach for Butler.

One thing Butler did do well was shoot from deep. Butler was 10-21 from three-point land and 7-10 in the first half. Kellen Dunham led the Bulldogs in that category, converting on five of six attempts and leading the Dawgs in total scoring with 17 points. Kelan Martin chipped in with 13 points of his own, but Martin and Dunham were the only Bulldogs in double digits. The Bulldogs shot a measly 11-37 on two-point field goals, good for just 30 percent.

“Dunham, man, I’m tired of playing against that kid,” Friars coach Ed Cooley said about the Butler sharpshooter. “He’s a great player. I love how he plays. He plays the game the right way.”

Dunham acknowledged the match-up nightmare that is Bentil in his postgame press conference.

“We got a steady dose of Ben scoring on all cylinders,” Dunham said. “Once he actually misses a shot, you have to secure the rebound. That’s one thing we didn’t do well. We didn’t take away their tendencies very well. It ended up in a bad result.”

Butler’s best stretch in the game came at the close of the first half and the beginning of the second half. Butler closed out the first period on a 10-0 run to cut the Friars lead to just two. Then coming out of halftime, Martin went on his own mini-run scoring five straight points and putting the Bulldogs on top 35-32 for what would be their only lead of the night.

The Friars would not stay down long as they exploded for 42 points in the second half, shooting the lights out with 60.7 percent from the field, including 23 points from Bentil, who was 75 percent from the floor in the second half. His 38 points are tied for second most in a Big East tournament game, just four shy of Donyell Marshall’s 42 points in the 1994 tournament.

Roosevelt Jones, who came into this matchup averaging 14.3 ppg, was held to just five points on one of nine shooting. Jones just couldn’t seem to create the space he usually can with his wide frame and power. The quickness of Providence’s defense contributed to Jones’ unusual performance.

Butler did take care of the basketball to an extent. Butler only committed 12 turnovers that turned into 18 Friar points. Providence’s opponents typically average 14.8 turnovers per game. Butler forced eight Friar turnovers that they converted into 11 points.

Austin Etherington and Tyler Lewis played well off the bench, eating up quality minutes for the Bulldogs. Etherington had five points while Lewis scored seven in just nine minutes.

The Bulldogs were out-worked in the post as Providence outscored Butler in the paint 38-20. Butler’s big men were left out to dry on multiple occasions as Dunn and Bentil blew right past their defenders and got to the rim with little resistance. No matter what defense the Bulldogs showed the Friars, they could not stop the big man Bentil.

This loss marks the third to Providence this season, and it sets Butler’s record at Madison Square Garden to 4-9 and 0-3 all time in the Big East tournament.

Butler will have a chance to redeem themselves as they await their seeding for the NCAA tournament on March 13.