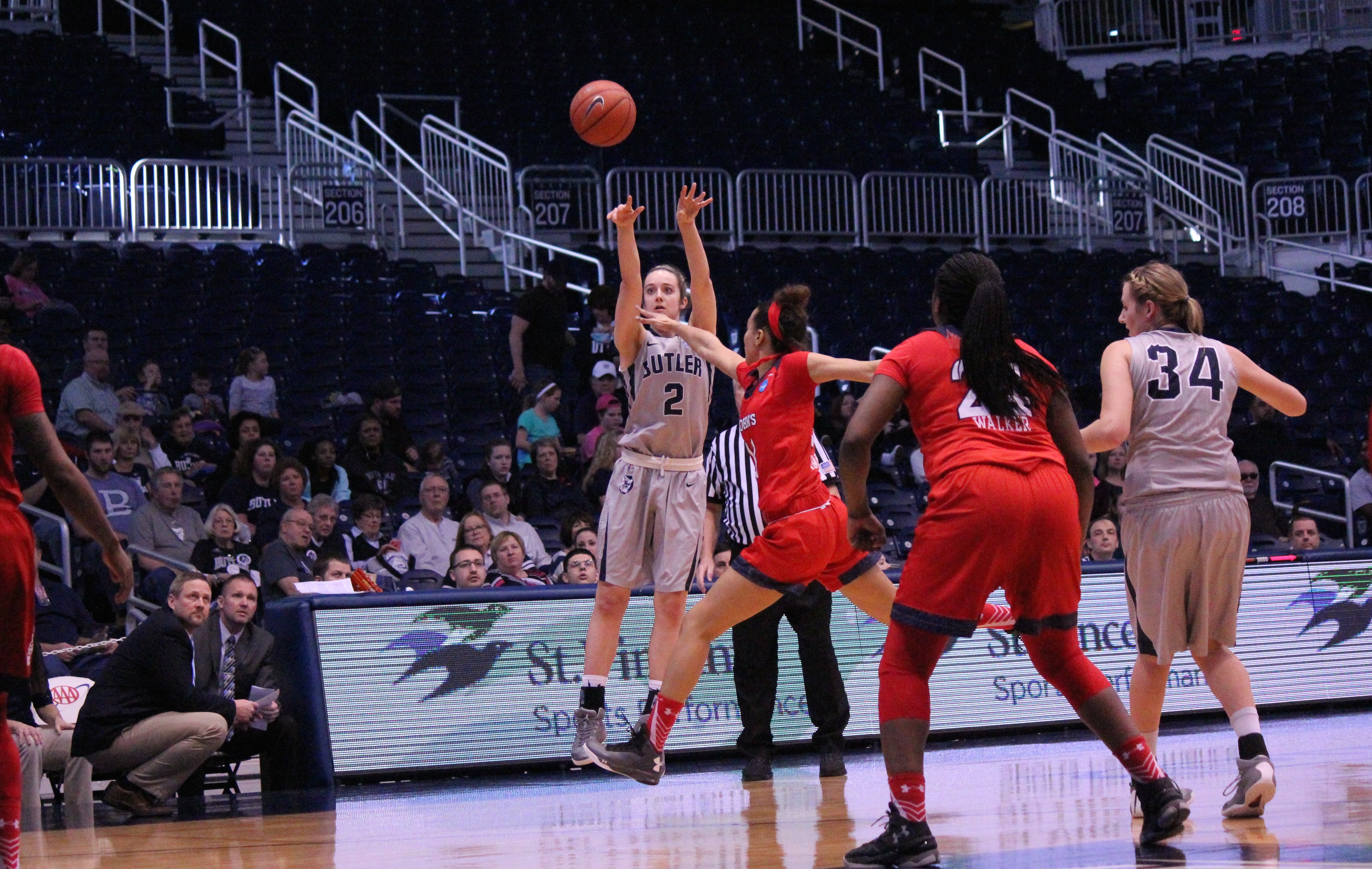 The Butler University women’s basketball team held off a late charge to give their seniors a great send off Feb. 21 as they defeated St. John’s University 62-58 at Hinkle Fieldhouse.

Butler will graduate senior guard Blaire Langlois and senior forward/center Belle Obert after this season. Feb. 21 was their final game in Hinkle Fieldhouse.

“I’m super excited for the kids,” head coach Kurt Godlevske said. “We’ve played better and better every day and every game, and I’m very happy for our seniors. To end their career playing inside Hinkle with a win … I’m just so proud of the kids.”

Individual photos of our seniors during the ceremony before today’s game! pic.twitter.com/uXpkJ7SqAI

Langlois was excited and proud of the team’s performance in her final home game.

“It was awesome,” Langlois said. “The team played great. We’ve continued to play better and better besides that DePaul game, and I’m glad we could finally show it with a win on the scoreboard. I couldn’t ask for a better way to end my career here at Hinkle. It’s a really emotional day. It’s been a really fun ride.”

Obert was just as proud and emotional as Langlois about Sunday’s game.

“To leave Hinkle on a win is amazing,” Obert said. “There are so many great memories here, and this will be the last one which is awesome.”

Leading into the game, St. John’s was ranked second in the Big East Conference, which certainly makes Sunday’s game an upset.

“Forget that they’re No. 2 in our conference, they’re getting regional votes in the nation, and for our kids to play like this against that type of team with two great players and a great coach is a huge thing,” Godlevske said.

Freshman forward Brittany Ward tied the game up with a couple free throws, and then sophomore guard Sydney Buck came back with a 3-pointer to put Butler ahead of the Red Storm. At the end of the quarter, the game was tied at 12.

The beginning of the second quarter was a back and forth between Butler and St. John’s. Each team had their fair share of the lead and shared it a couple times with a tie.

After the media timeout, freshman forward Tori Schickel gave Butler the 19-17 advantage. Langlois followed up with a 3-pointer and freshman guard Taylor Buford scored another basket to put Butler on a roll. At halftime, Butler lead 29-21.

The Bulldogs started the third quarter continuing their first half run. By the media timeout with just under five minutes remaining, Butler held an 11-point lead over the Red Storm. St. John’s did get the deficit down to nine, but by the end of the quarter, Butler led St. John’s by 13 points; 45-32.

The fourth quarter started off well for St. John’s as freshman guard/forward Akina Wellere scored a quick basket to give the team some momentum. By the media timeout with four minutes remaining, Butler had just a six-point lead.

Through the middle of the quarter the Bulldogs went through a more than three-minute scoring drought as St. John’s went on a 6-0 run and started to press Butler very hard.

“We knew they were going to do that,” Godlevske said. “I was more nervous for our kids because they’ve battled so hard and I wanted it for them so bad.”

Obert was nervous about St. John’s last quarter run. But, she had to be nervous from the bench because she fouled out of the game.

“You always get nervous, especially since I fouled out and I was on the bench,” Obert joked. “But I had faith in my team and I knew we could finish it out.”

The Red Storm got the lead down to one point with 13 seconds left. Two fouls by St. John’s and three made free throws by Langlois and freshman guard Alexa Bailey secured the win for Butler.

So proud of our lady Dawgs! Thank you to @ButlerPrez @BUADCollier for helping make senior day special! Enjoying this one!

“That was a great win, especially for the occasion with it being senior night,” Ward said. “We just wanted our seniors to go out with something they could possibly remember.

“That team is a Top-25 team and getting votes in the AP poll, and we’re just excited we got a chance to win a big game before going into the tournament. It just shows that we can compete with anyone in the tournament and we can win games as long as we play hard and execute and do things right we can win any game.”

Langlois led the way for the Bulldogs with 16 points and six assists. Ward followed with 11 points and Buck had nine points and five rebounds.