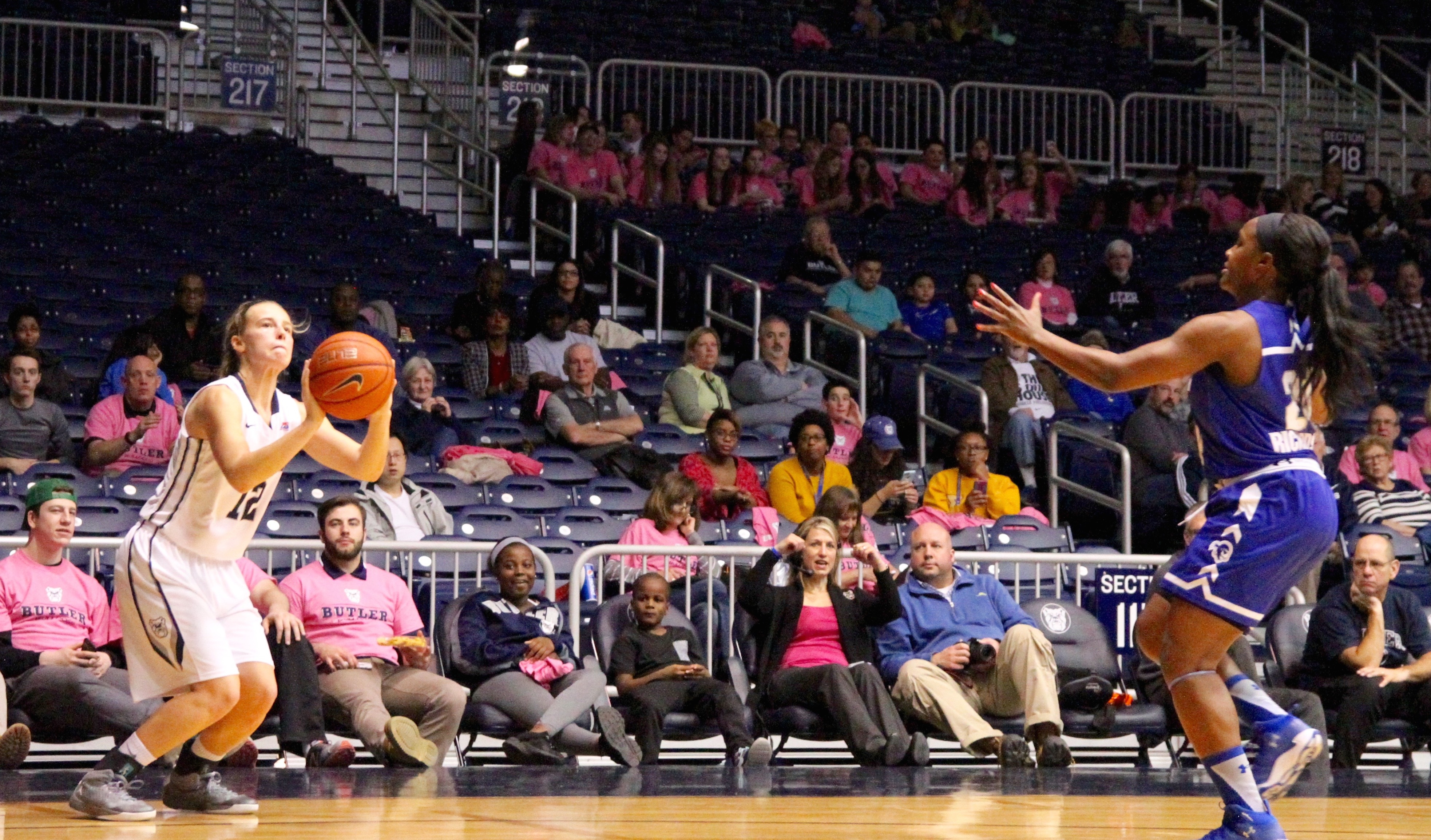 After a late charge by Seton Hall University, the Butler University women’s basketball team lost the annual breast cancer awareness game by a score of 72-67 on Feb. 19 at Hinkle Fieldhouse.

“I thought we did a phenomenal job in the first half of getting stops and really attacking them,” head coach Kurt Godlevske said. “And then they ramped up their pressure in the second half. They’re a team that very well could win our tournament,” Godlevske added. “We had our shot at them. I thought our kids played very, very well.”

Butler started off the game on a run and had an 8-0 lead three minutes into the game. The first three possessions for Seton Hall ended with a Butler steal, an out of bounds turnover and an air ball.

Senior guard Tabatha Richardson-Smith put Seton Hall on the board for the first time as she drained a three.

The Pirates picked up momentum from there and brought the game to within five points at the media timeout with just under four minutes to go in the first quarter. The quarter ended with Butler ahead 18-14.

The second quarter started with a quick 3-pointer by sophomore guard Sydney Buck. Senior forward/center Belle Obert followed that up with her second 3-pointer of the night.

At the midway point of the quarter, Butler went through a three minute scoring drought that allowed Seton Hall to close to within four points. Butler led 24-20 at the media timeout.

The Bulldogs went on a small run late in the quarter and surged to their biggest lead of the half at nine points, thanks in part to another 3-pointer by Buck. Obert scored a last second bucket to put Butler up 36-28 at halftime.

@ButlerWBB up at half 36-28 over Seton Hall. @SydGetsBUCKets with 3 3’s 🔥and Belle Obert with a big bucket at buzzer before half. #GoDawgs!

“I was proud with how we came out in the first half,” Obert said. “We did a good job, and we did a lot of good things.”

At the beginning of the third quarter, Butler opened up their lead a little more, leading 40-30 with more than seven minutes to go. As the media timeout during the middle of the third quarter approached, Seton Hall had shrunk the lead to five points.

The Pirates made a late-quarter run and took their first lead of the game. The quarter ended with Seton Hall up 48-47.

Senior guard Blaire Langlois drained a 3-pointer within the first minute of the fourth quarter. Seton Hall freshman guard LaTecia Smith went to the basket and took the lead back for the Pirates on the next possession. Langlois came in clutch again with another 3-pointer to pull Butler within one point with six minutes remaining in the game.

After the final media timeout of the game, Butler went into another three minute scoring drought as Seton Hall started to pull away. The Bulldogs shrunk the lead to under five a couple times, but the Pirates kept responding with buckets of their own. Also, freshman guard Alexa Bailey fouled out of the game midway through the fourth quarter.

The last minute was a game of who-could-foul-who-the-most as Butler tried to slow the game down. It wouldn’t work, however, and Seton Hall would win with a five point margin over the Bulldogs after they led for nearly 30 minutes of game time.

The team looked at their defense as a major reason as to why they lost their lead in the second half.

“Our defense was really strong in the first half, and I think that is what kind of let up in the second half,” Obert said.

“We struggled containing No. 1 Richardson-Smith, and then we struggled rebounding a little bit,” Buck said. “But they really turned it up offensively, too, and we couldn’t match it.”

Godlevske found other issues with his team that he would like addressed by their next game on Feb. 21.

“We went through a long stretch there where we weren’t getting good looks, and it’s something that we got to continue to learn and grow from,” he said.

Langlois lead the way for the Bulldogs with 19 points and six rebounds. Freshman forward Brittany Ward and Buck followed with 13 points. Buck also had seven rebounds. Obert was the fourth member of the team to score double digits with 10 points.

Final Score from Hinkle Fieldhouse. Join us on Sunday at 2 PM for Senior Day vs. St. John’s pic.twitter.com/QaZGM8uJuK

Richardson-Smith led the way for the Pirates with 27 points and seven rebounds. Senior forward Tiffany Jones tallied up a double-double with 14 points and rebounds each.

The Bulldogs are in action again at home on Feb. 21 as they play St. John’s University at 2 p.m. ET. The game can be watched live on the Big East Digital Network.