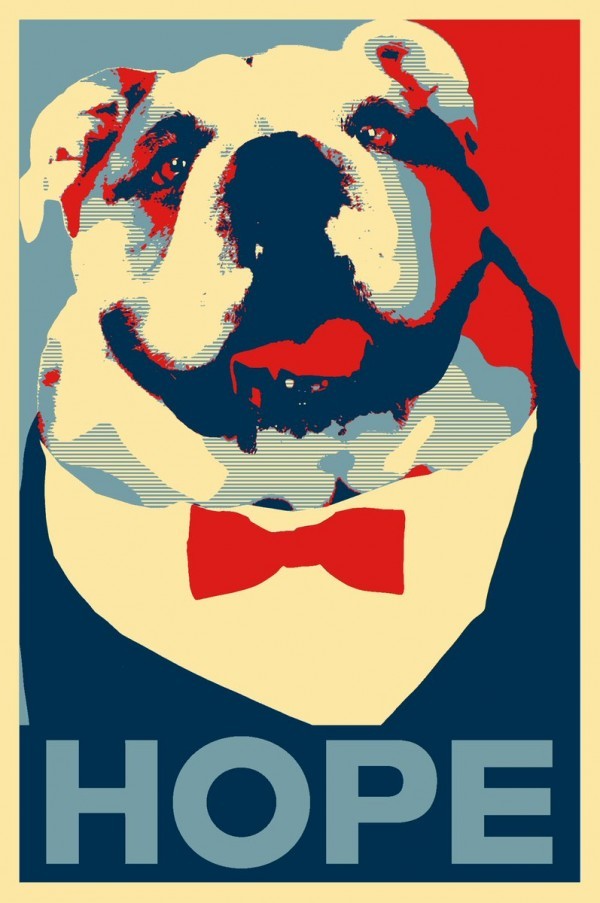 The Collegian sat down with Trip to ask his some questions about the campaign.

Collegian: What is the Canine Ticket?

C: Why did you decide to run for the White House?
T: Georgetown Jack and I discussed the prospect behind closed doors, and volunteered ourselves for the good of America. I don’t want to speak for Jack, but I think we would both agree that as mascots, we have the best jobs around. However, it’s would be an immense honor to lead our country. We owe it to America and our universities to do this.

C: You and Georgetown Jack have hung out a lot since Butler became a part of the Big East. Do you consider him more of a friend or a professional acquaintance?
T: Georgetown Jack and I have spent some quality time together since we’ve become fellow members of the Big East Conference. What began as a professional acquaintance relationship, quickly became a trusted friendship. We’re the only live mascots in the Big East, we’re both English bulldogs, and we understand that when we join together, we can make a powerful duo.

C: What strengths do you both bring to the campaign?
T:  I’m a bit older, but he’s also closer to the political scene in Washington. Realizing that we both bring unique, complimentary qualities to the campaign, we decided to become running mates and tackle this together.

C: Is it hard to campaign with a Big East rival?
T: Jack and I are both pretty confident in ourselves and our reputation as elite mascots. That can sometimes lead to a butting of head on issues, but keep in mind, that’s also a bulldog thing too. We’re happy to let our student-athletes compete against each other, while we join forces as political allies.

C: Do you have some big plans in mind to win?
T: I’m a bulldog. I always believe I will win. Our plan is to shock Washington with the announcement of our candidacy, and let that shockwave ripple across America. Then we’re going to let our constituents do the campaigning for us while we continue to be the mascots we’ve always been. Who we are now, is who we’ll be in the White House. That’s exactly what we want Americans to see.

C: Why do you deserve to win?
T: Jack and I are the most non-political politicians Washington has ever seen. We think that’s a refreshing opportunity for our country. We’re bulldogs of the people, we’re obedient, strong-willed, loyal, and bullish on our beliefs. We’re staunch advocates for education, we’re well-connected, and our track record of success and public support speaks for itself. The United States doesn’t need more presidential candidates, they need leaders. Look no further than the Canine Party.

C: Do you think there will be more perks being president than a mascot?
T: The fame and notoriety of mascot life is cool, especially when it gets Butler a little extra attention, but I think it’s all of the different places that I get to visit and the special access that I’m given. I love to be active and therefore, I love to travel. From what I hear, the one that occupies The Oval Office does quite a bit of travel and receives special access too. I like the sound of that.